Should You Deal With A Book Distributor Or Wholesaler?

Your Other Option Might Be Selling To Your Cousins

Congratulations! You've sweated bullets for months over the manuscript; came close to getting a Mob contract to get your Editor whacked; put a second mortgage on the ol' ranch; maneouvered through the treacherous waters where the designer piranhas, printing sharks and shipping gators hungrily gobble up their unsuspecting prey and their wallets; and now you have several thousand copies of your genre-busting/sure-bestseller/great-American-whatever new book sitting in a damp warehouse somewhere in a graffitied, potholed industrial "park" growing a thin film of green mould on that shiny, expensively-lacquered cover.

You are not the first wannabe publisher who has faced this infuriating paradox. You have gone through hell and back; maxed out your MasterCard; borrowed wads of money from ugly scarred guys in back alleys; all to self-publish the greatest book in creation. And now you've run out of cousins to sell it to. "But... the 'Be Your Own Publisher For Fun & Profit' website never warned me about this!" Er... too late for that, buddy.

A wise old man once told me: "The smart businessman sells his product before he makes it. The stupid one makes his product then tries to find someone to palm it off on." In no industry is this more relevant than book and magazine publishing. Many moons ago, I had a young hotshot magazine publisher approach me to consult on his revolutionary new publication concept that was going to change the world, cure disease, reverse global warming, facilitate world peace, and bring back the dodo and mammoth. He was going to run off 750,000 of his first issue. I looked at his marketing plan written on a napkin and asked him if he would consider a shorter print run at first as I couldn't see where and how he was going to put three-quarter of a million magazines on the very-crowded newsstands.

To make a long story short I happened to be at the printer's warehouse six months later when about 748,000 copies of that magazine were pulped. The last I heard of the young hotshot he was older, had cooled down significantly and was typing classified ads in a Trader publication for a buck over minimum wage.

The moral of the story is simple: Listen to wise old men and let the market determine your production.

For the vast majority of self-publishers who are not related to a Bezos there is no option but to deal directly with wholesalers, distributors and jobbers. For most new publishers just mentioning those terms makes their eyes roll back in their heads, but getting your book/magazine on the shelves is not as traumatizing a prospect as you may think. Just make sure you get a signed distribution contract months before you go to press!

Let's simplify the matter: Most products have middlemen between the producer and the retail outlet which distribute the product in return for a hefty percentage of the MSRP. So do publications. Publishing middlemen have networks of trucks that spread out all over their geographical region delivering publications to all the retail outlets. They convince the retailer to stock the publication, deliver it, pick up unsold copies, invoice and collect the money. Then, what little is left, they pass onto you. Eventually. Mostly after lots of angry phone calls from you and several threatening letters from your lawyer.

If you think that's unacceptable, just go try doing it yourself. There's likely over 25,000 retail outlets that sell publications in any one large Metro area. I'm sure you can just load up your pickup truck and go hit them all by the weekend, right? Uh huh...

If you're trying to market a book or national periodical, you really have no choice but to deal with a national distributor or wholesaler. They can get your pride and joy into the appropriate retailers from coast to coast. In the case of regular periodicals, they can get them all out on the same day of the week or month. It's a remarkable distribution matrix, and yes, the publisher pays for it bigtime.

So what's a distributor, wholesaler and what the heck is a jobber?

Distributor: Takes all your books, gets them on the shelves at Costco, Borders et al., and sucks away at least a third of the book's wholesale price (which is often less than half the MSRP).

Wholesaler: Basically a middleman between the distributor and the retail outlet (oh yeah... the pie keeps getting sliced thinner).

Jobber: A middleman between the wholesaler and the retail outlet. By now the pie slice is becoming translucent.

If you deal with a distributor, you just ship all your books to one place and let them deal with getting them across the country and in some cases around the world. It's the best way to play the game, but you pay for the privilege with big stacks of hundred-dollar bills. And that's only if the distributor will take you on. Many of them will not deal with a publisher unless they will place 4 or more titles with them at once, or there is a strong track record of previous sales. It's kinda like having your local 100% interest a month loanshark making you fill out a credit app. And then turning you down.

Wholesalers are usually specificallly regional, so if you want national distribution you may be out of luck. They charge less than the distributors, but you might only be able to cover, say, the New York Tri-state area, or Southern California. That may be great if you're pushing a book reviewing LA restaurants, but not so good if you're counting on national sales.

Jobbers you only deal with directly if you've got a community or neighbourhood publication. A book on the history of a town or recipes from a certain city would do well with jobbers. They suck away less than wholesalers, but are useless for anything but the most local of publications.

Any decent distributors and a few larger wholesalers will get your book listed on Ingram's list. In the cases of most retailers if a book isn't on Ingram it doesn't exist, so that is a big priority, even well above amazon.com. Oh, and forget doing that yourself. Ingram won't return your calls.

A quick word about "special order." That's when the distributor/wholesaler/retailer has to get the book from you when an order comes in, vs. physically stocking it. Oh yeah, it sounds like a POD publisher's dream: Only print as many as hard orders come in for on a weekly basis! Wrong. "Special order" is shorthand for publishing death. If you can't keep stock on hand where it's needed, you might as well go back to trying to find more cousins to sell your book to!

Scared yet? You should be. However, there are upsides to this whole maze. If your book hits big you'll be looking at (to quote Will Smith) checks that "come on a flatbed." Don't spend them before they arrive as you might be looking at a 6-8 months delay in getting them into your paws, but they will eventually get there.

Getting your self-published publication "out there" is much more complicated than any wannabe-publisher n00bizoid can ever imagine. But if you get to be one of the rare l337s, the rewards can really be worth it. 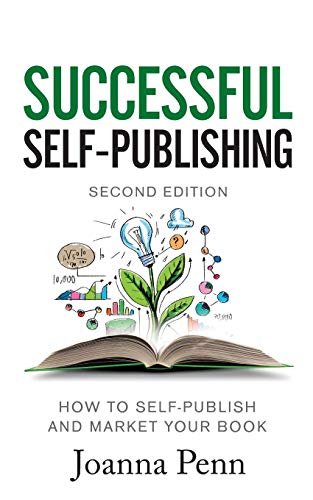 Successful Self-Publishing: How to self-publish and market your book in ebook and print (Books for Writers)
Buy Now