The White Rabbit from 'Alice's Adventures in Wonderland'

A Book That Changed Me - A Beginner's Guide to Reality

When asked to write about a book that changed me, I really struggled to think of anything. Sure there are lots of books I have enjoyed and read several times such as the Narnia books, or Lee Child's Jack Reacher books; and there are many books I have learnt a lot from, but I couldn't really say any of them had changed me.

Then I remembered 'The Beginner's Guide to Reality' and how it had changed my view of the world around us and in this article I would like to share it with you.

Photo of The White Rabbit courtesy of wikimedia commons

What is the Book About?

As the title suggests, this is a book all about reality. Baggott draws a lot from popular culture, referencing Lewis Carroll's Alice in Wonderland and Through the Looking Glass (hence the rabbit in the photo) and movies such as The Matrix trilogy, Thirteenth Floor and Memento; using these as discussion points to help explain his ideas and get you thinking more deeply about reality.

The book is split into three parts; part one looks at social reality, part two deals with philosophers and their take on reality and finally part three delves into some quantum mechanics and its applications.

I first came across the book when it was on display in the University of Warwick bookshop and it immediately grabbed me. I read through it fairly quickly and have re-read it several times since.

A Beginner's Guide to Reality 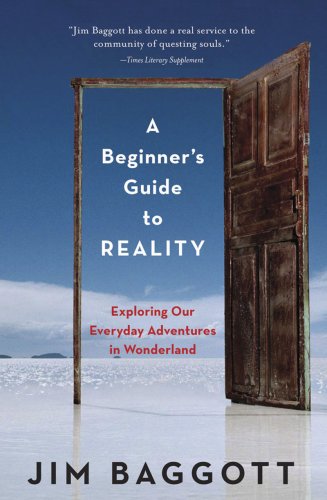 A Beginner's Guide to Reality: Exploring Our Everyday Adventures in Wonderland
Does this book exist? This is one of the many questions asked and answered by Jim Baggott.
Buy Now

In Part one, Baggott deals with Social Reality by looking at consumerism and the existence of money and civilisation, among other things. He draws on examples such as New Coke, Disneyland and of course 'The Matrix' to examine these ideas in more detail. Baggott draws heavily on works from other philosophers, such as Jean Baudrillard, looking at their ideas and how they fit into the modern world. It's a very interesting start to the book.

Part Two - The Doors of Perception

This is the part that I found most interesting. In this chapter, Baggott deals with the concept of existence looking at examples such as Plato and his prisoner in the cave, the ever looming 'Matrix' trilogy with its computer generated world of people oblivious to the fact that none of it is real and 'The Thirteenth Floor', another film which examines the idea of computer generated worlds.

This chapter really got me thinking about existence. Baggott lays down some very plausible ideas about our existence and whether we'd know or not if we were in a Matrix style existence. It's quite scary stuff if you really think about it.

The Matrix - Red or Blue Pill

In the book (and this lens) the philosophy of the Matrix is discussed a lot. In the film, when Neo first encounters Morpheus, he is given a choice between two pills. The blue pill returns him to his 'normal' life in the machine, oblivious to what is actually going on; the red pill keeps him in 'Wonderland', out of the machine and in the real world.

Which Pill Would Take, Red or Blue?

Which pill would you take?

This is the chapter which will probably lose most people. Here, Baggott starts examining quantum mechanics and with reference to the works of physicists such as Einstein and Bohr. As a maths graduate I really enjoyed this part, but if you are looking for a more philosophical slant on things, the first two chapters are certainly more for you.

What Effect Has This Book Had On me?

I don't know if this book has affected the way I am from an external point of view or not. It certainly hasn't made any large changes in the way I physically approach life. What it has done though is question my views on reality and how I (and other people) perceive the world around me.

I now find it quite amusing that if I walk into a shop and buy something, I pay for it by handing over some pieces of paper (bank notes) which are actually, physically worth next to nothing or I hand over a piece of plastic and some computers somewhere move electronic money around.

I watch films like 'The Matrix' and just wish they'd venture further into the philosophy of things instead of just giving up and becoming mindless action films for the most part.

Anyway, in conclusion, 'A Beginner's Guide to Reality' is an extremely interesting book, guaranteed to get you thinking and wanting to discuss points with others.