An Agatha Christie Mystery in Istanbul

I like Agatha Christie's Mystery books very much (especially Mrs. Marple books). As she is one of my favorite writers I read about her life and books. I learned that she visited Istanbul several times and wrote her famous book ; "Murder in the Orient Express" in Istanbul.

She wanted to travel on the Orient Express, here is her exact words:

"All my life I had wanted to go on the Orient Express. When I had traveled to France or Spain or Italy, the Orient Express had often been standing at Calais, and I had longed to climb up into it. Orient-Express--Milan, Belgrade, Istanbul..."Agatha Christie, An Autobiography (1977)

Her desire made her write the book. "Murder on Orient Express".

Also she lived a mystery in Istanbul..

A mystery in Istanbul

The world-famous author Agatha Christie visited Istanbul many times between 1926 and 1932. She always stayed in Pera Palas Hotel ( an ancient hotel in Istanbul) during her visits.

Today, her room 411 is preserved the memory of her.

On December 3rd 1926 Christie had a big fight with her husband, Archibald Christie as Christie found about his mistress (Nancy Neele). She left the house that day without saying where she would go.

As she didn't return next morning, her husband began to worry. Later that day her car was found a few miles from Styles, near the hotel where her husband was going to spend the weekend with his mistress. Agatha Cristie's fur coat, her suitcase were all inside the car.

Police and volunteers searched the surrounding area and found nothing. Where was she? Was she murdered? She was lost for 11 days. It is believed that Agatha Christie was in Istanbul during that 11 days. As she told every one that she couldn't remember anything, those 11 days stayed as a mystery.

In preparation for the movie Agatha (1979 release), Warner Brothers took the unusual course of contacting the famous Hollywood medium and clairvoyant, Tamara Rand, to see if she could get in touch Christie's spirit. Contact was made, it was claimed, with Christie's spirit, which indicated that the key to the box containing her missing diary - the diary which would solve the mystery - was in room 411 at Pera Palas Hotel in Istanbul.

The Turkish press and foreign journalists went to Pera Palas, room 411, on March 7, 1979. under the direction of Tamara Rand, the floor of the room was taken to pieces, everything being shown by satellite on American television.

At the point where the wall joined the floor, right by the door, a rusty, eight centimeter-long key was found.

Tamara Rand said that, after she went into a trans, she began to write in a language she did not know. The words she wrote were the name of a street in Istanbul and the name of a hotel on that street. Afterwards she saw the hotel and Agatha Christie. Agatha was in room 411 and was hiding the key to her diary under the floorboards.

Tamara Rand had a vision of Agatha Christie walking along a paved street and read the sign "Mesrutiyet Caddesi". Then she saw Christie getting into a building called Pera Palas going up into room 411. Once she closed the door, she hid a large key beneath the floorboards.

In January 1986, a second key numbered 411 was found in the Pera Palas Hotel, this time in room 511, and the mystery, some say, took on a new dimension.

"Time is the best killer."

Orient Express: The Story of a Legend
Buy Now

If you know Turkish, I will recommend a book. Ahmet Umit, a young detective novels writer wrote about Agatha Cristie's mysterious stay in Pera Palas. The book's tittle is Agatha'nin Anahtari - Agatha's Key. It is worth reading.

I hope it will be translated into English... 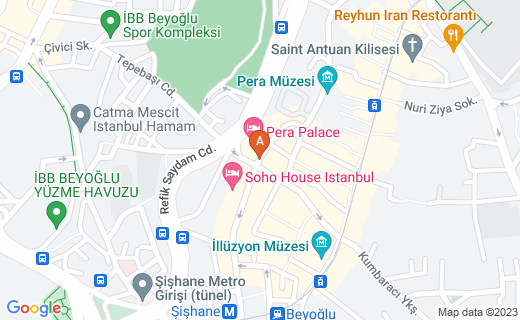