Flying Kicks, Buddhist Monks and the Legend of Iron Crotch: An Odyssey in the New China

The true story of a young American who drops out of college and travels to China in search of the legendary Shaolin Temple.

Along the way, he learns a lot about himself and eventually becomes the first American accepted as a disciple of the Shaolin monks.

I first heard about American Shaolin from a radio interview with the author. It sounded like an interesting story and prompted me to buy the book. Below is my review of American Shaolin.

The Story of the American Shaolin

A stranger in a strange land...

After completing his 3rd year at Princeton, Matthew Polly decides the only way he can fix the "things that are wrong with Matt" is to study kungfu with the legendary Shaolin monks.

It's the early 1990s and Polly doesn't even know if the Shaolin Temple still exists. Relying on his 3 years studying Chinese and martial arts, he takes the remainder of his college savings and heads to China. His parents were predictably thrilled with that decision.

He finds his way to the Shaolin Temple in China's rural Henan province and is surprised by the differences between his idealistic expectations and reality. The village surrounding the temple is a kungfu tourist trap and the Shaolin training center is run by the Communists. Undeterred, he signs up as a student with the monks and begins his training.

The book covers his experiences over the next two years living and training with the Shaolin monks. Along with his rigorous kungfu training, Polly also has to adjust to life as a laowai (foreigner) in rural China where many locals have never seen an American before.

This book is a must read for anyone interested in China, Kung-fu, foreign travel or good, funny stories. I laughed out loud many times while reading this book.

It's important to mention that you don't need an interest in kungfu to enjoy this book. The story is about much more than studying the martial arts.

The author does an excellent job of bringing his relationships with the monks and other people he meets in China to life. We learn through these relationships about the challenges and ironies of living in a communist country as it tries to open up to the world.

Like many people (myself included) Polly has a habit of assigning private nicknames to certain people he meets. These include Monk Dong, the iron crotch kungfu master, and Shou Ting, the loud and argumentative girlfriend of one of his instructors. Of course he never shares those names with their owners but it's easy to imagine yourself in a foreign land secretly making up names for people you encounter. 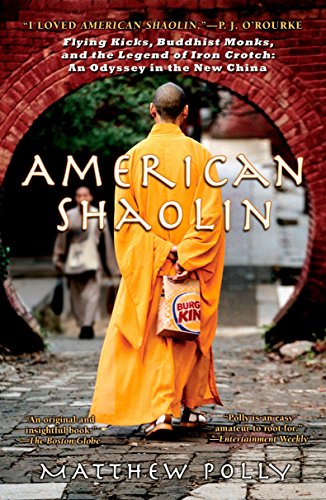 American Shaolin: Flying Kicks, Buddhist Monks, and the Legend of Iron Crotch: An Odyssey in the New China
A great story that's worth reading.
Buy Now

Polly's writing is honest with a lot of wit and humor thrown in. He shares the good, the bad and the bizarre aspects of his experience. It's like listening to a good friend telling you about his adventures overseas.

I'm sure there is a lot of embellishment in some parts, but it reads very naturally. Polly usually pokes fun at himself first and others second while telling his tale.

His observations of the Chinese people, culture and daily life are fascinating and hilarious at the same time. Everything from being treated with rural Chinese medicine to mastering the strategies of Chinese drinking games.

One common observation was that his interactions as a laowai with taxi drivers, merchants and regular Chinese people typically followed an unpublished script. These usually started with "Look, a laowai!" or "hey, your Chinese is very good!" when they heard Polly speak. Many of the people he encountered in rural China had never seen an American before.

The book does seem to end abruptly with a rushed summary of events. Polly includes an epilogue that describes his return to Shaolin ten years later and the considerable changes that occurred over that time.

About Matthew Polly and the Shaolin Temple - Learn more...

What I Liked About "American Shaolin"

It's tough to pick only three favorites for this one.

My Rating of "American Shaolin"

By now it should be clear that I had fun reading this book and gained some good insights into Chinese culture. I also learned a little about kungfu. It's a book that many people will find interesting and entertaining.

How Do You Rate "American Shaolin"?

What Is The Legend of Iron Crotch?

Iron kungfu is a special style where one part of the body is trained extensively to strengthen and harden it (iron fist, iron stomach, etc). The training usually involves hitting the body part repeatedly with or against a solid object.

Polly was a student of iron forearm while at Shaolin and his training included hitting his forearms against a tree for 30 minutes every morning. One of the monks Polly met at the temple was a master of iron crotch kungfu. Yes, it is what it sounds like...you'll have to read the book for the amazing details.

Thanks for visiting my review. Please share your thoughts on American Shaolin, kung-fu or traveling to foreign countries in the comment section below.