Biographies and Memoirs I've Read and Can Recommend

Biographies tell the intimate, personal life story of someone - most often a famous person, but not always. Biographies are usually written by a non-involved third person. Sometimes they are written by a friend, colleague, or family member.

Tobias Wolff is best known for writing short stories, but he's also written two memoirs and a few novels. I read This Boy's Life in 2017... or should I say, I listened to the audiobook version. This is a great memoir telling the story of his move from Florida to Utah with his mother. Later they moved to Washington state.

The first move was to escape from an abusive boyfriend. Tobias' mom wanted to live in Utah with the idea of earning riches through the mining industry. That didn't pan out, and the boyfriend followed her. Once again they were cohabiting, this time in Salt Lake City. Tobias learned bad habits from the man, and eventually mother and child made their second escape, this time with the goal of living in Seattle.

As single mothers do, Tobias' mom managed to find another man. Unfortunately, he was a bit of a narcissist. Enough with the story telling . . . I don't want to get into a lot of spoilers.

I very much recommend this book and especially recommend it to young single mothers who are wondering how to raise their children. Very often, the second or third husband turns out to be someone incapable of treating the children appropriately. A sad state of affairs, and something this book illustrates clearly. 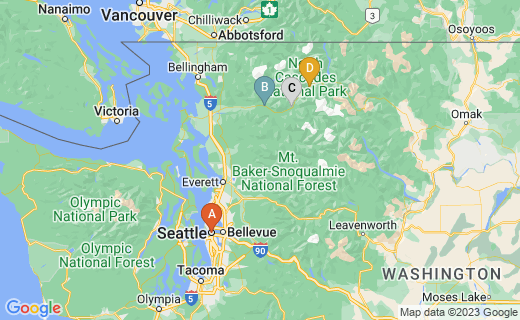 Where they occasionally traveled to, the largest city nearby.

Where his step-father always stopped at a bar, on the way home.

Where he lived, nearly 40 miles away from his high school. In the book, he called this place "Chinook."

The Stranger in the Woods: The Extraordinary Story of the Last True Hermit
Buy Now

The Stranger in the Woods: The Extraordinary Story of the Last True Hermit, by Michael Finkel

The first time I saw the cover of this book while browsing in my favorite independent bookstore, I knew we had an appointment in the future. I bought it a month or so later, and wow, what a story.

There's a lot of controversy about this book because many people don't like the hermit. He was a bit of an oddball, yes, but more than that, he was a thief, terrorizing the cabin owners around a lake in the state of Maine, breaking in to rob them and take whatever he might want or need. They should have bought extras for their local hermit, because this was a problem lasting many years.

My main reason for loving the book was the persistence of the author who went after this story with a vengeance. While other writers failed, he managed to get into the personal life of the reclusive hermit, after the man was apprehended and jailed. He explored the hermit's wooded territory and wrote about his findings. I found the research and reporting of this solitary life to be as fascinating as the hermit's story itself.

Unbroken: A World War II Story of Survival, Resilience, and Redemption is the true story of Louis Zamperini, an Air Force lieutenant. I read this biography in 2011. It opened my eyes to some of the realities and suffering of US troops during the second world war. One wonders why atomic warfare was used to end the war. This book shows why.

In 1943 the bomber Louis Zamperini was in crashed into the Pacific Ocean. He was one of three survivors who found a raft to pile onto. His story of being on that raft, starving and drifting for weeks, is riveting, but then he became a prisoner of the Japanese military.

I listened to the Audible audiobook version and could not stop listening. Not only is the book well-written by Seabiscuit author, Laura Hillenbrand, the adventures and experiences of Mr. Zamperini are mind-boggling. They gave me a much greater appreciation of soldiers in World War II than I had before.

My father was a World War II veteran but my opinion of war was to become a Viet Nam war protester in the sixties. Learning of the trials and suffering of Mr. Zamperini turned my heart and mind around, as to what transpired during World War II. 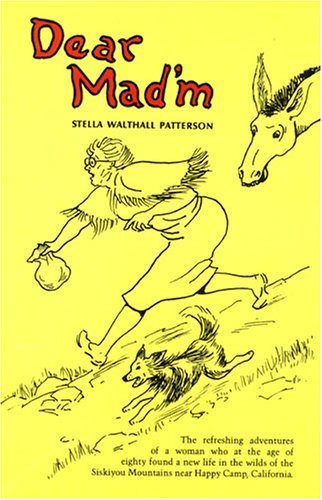 This memoir is a local favorite from the mountain town where I used to live, Happy Camp, California. It is a humorous memoir written by a woman in her 80s. Her family wanted her to go live with a relative and rest, but Stella had other ideas. She decided to go live on her very remote mining claim in the Klamath River Valley, in a cabin near the Klamath River. The town she lived in was called Ferry Point. Now the homes are gone from that area and it is merely a forest service "river access" site. The nearest still-existing town is Happy Camp.

She made friends with the neighbors, a donkey, and a young Native American girl, and did her best to spruce up her cabin, grow vegetables in her garden, and work her mining claim the required days per year.

This memoir is popular and well-loved, not only by other Klamath River Valley residents, but also by readers in many other areas. Stella's memoir inspires us to know that being old isn't the same as being dead. Even at an advanced age, we can continue to be adventurous and make the most of life.

In 2011 I kept getting an inspiration for a "Dear Mad'm Day" event. I'm not much of an event planner, but my friend and co-worker at the Happy Camp Chamber of Commerce certainly is. We did the first Dear Mad'm Day together in 2011, and when I moved away in 2013 she determined to keep up the tradition. Now, in 2017, she's still doing this annually. She calls it the Dear Mad'm Symposium and for the second year the event will take place in the Siskiyou County Historical Society building in Yreka, California. That's really a better location because Happy Camp remains a very remote location, 65 miles from Interstate 5.

Where Dear Mad'm lived, and where I lived in Happy Camp 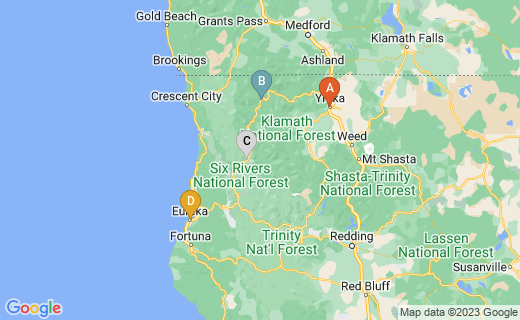 Orleans is 50 miles from Happy Camp.

Your comments are welcome! - ...as always.