Thrillers make great summer books to read. It's impossible to escape the heart-pounding plots that make thrillers nearly impossible to put down. Vacation time by the pool or on the airplane is a perfect time to delve in. Once you begin reading any of these books, you may just need to say goodbye to your everyday responsibilities until you've finished.

Some of my favorite thriller authors include; CJ Lyons, James Patterson, Kathy Reichs, Lee Child and Louise Penny who have all been publishing bestselling thrillers for years. Their popularity comes from their ability to craft stories with remarkable characters, interesting, page-turning plots and quality writing. I'll feature some of their more recent books as well as my thoughts on some new releases for 2014.

This 2011 release by CJ Lyons is about death, despair and lies, but readers will also find hope and love in these pages.

A departure from her typical medical thrillers, pediatrician CJ Lyons writes about a woman names Sarah who returns from witnessing the execution of the man who killed her son, husband and others.

The confessed killer refuses to disclose the location of the bodies, and Sarah returns to the town where she lived determined to find them so she can give them a proper burial. During her search, Sarah uncovers new details about the murders that shake up everyone involved.

She finds that she can't take any information for granted, and that nothing is as it seemed, even her marriage with the husband she loved. Sarah finds that, through anger and betrayal, she can find hope, love and forgiveness. A story with interesting plot twists and a surprising ending. "

Kill Me if You Can

James Patterson has long been the king of thriller fiction. He is the all-time number one best-selling author of the New York Time's Bestseller List; he's had 63 titles on the list over the years. Patterson's books have sold 205 million copies worldwide. New readers of Patterson will soon see why he is so popular. His new book,

"Kill Me if You Can" delves into the world of the starving artist. Matthew Bannon, a New York City art student, who finds a bag full of stolen diamonds in Grand Central Station.

At first, this seems like great luck, but soon Matthew finds that people are after him, and they won't be satisfied until they have the diamonds... and his life. The Ghost, a notorious assassin, is on Bannon's trail, but someone wants The Ghost dead, too. From New York City to Paris, Amsterdam and Venice, Matthew tries to get rid of the diamonds, outwit the Russian mafia and an assassin and stay alive. Published by Little, Brown and Company, this book is 384 pages of intrigue and suspense.

5 stars for Field of Prey 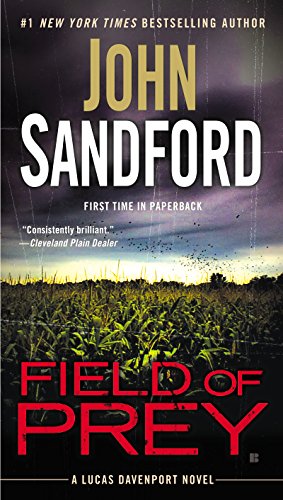 This short novella is the latest in the fifteen book Reacher series about Jack Reacher, the violent, vengeful ex-military policeman who always seems to have a grudge to overcome. "Second Son" takes readers back into an earlier time in Jack's life, when he is stationed in Okinawa with his family at age thirteen.

The year is 1974, and Jack's father is preparing for a special-ops assignment with the Marines. Jack and his older brother are the new kids on base, and they quickly find that the other kids are prone to pushing them around. Jack's personality as a man who doesn't take any crap comes out, even as a young teenager.

But, during his plans to exact revenge on the kids who bullied him, an even more dangerous situation emerges. Jack tackles this new problem with the fortitude and wit that defines him throughout his career as a military policeman and revenge artist. Published by Delacorte Press.

A Trick of the Light: A Chief Inspector Gamache Novel

Canadian author Louise Penny published her first book in 2005 and has garnered many awards for her writing since. Now she brings readers a new Inspector Gamache book full of interesting new characters that provides a glimpse into the art world.

The book opens with Clara Morrow's art exhibition in Montreal -- a boon for the budding 50-year-old artist. She returns to her home in a small village outside the city, for a celebration with her closest friends (including Inspector Gamache). The next morning, Lillian Dyson is found murdered in Clara's garden. Lillian, once Clara's best friend, has been estranged for twenty years following a betrayal. A host of people, including Clara, quickly become suspects.

Chief Inspector Gamache must sift through the suspects, learn more about Lillian and the person she had become, and deal with the personal issues still present from the attach on his team the year before. Issues of jealousy, friendship, marriage and forgiveness all come to the forefront as Lillian's past relationships are explored in order to find her killer. Highly praised by readers and fans, this thriller is intriguing, yet touching. Published by Minotaur Books in August, 2011.

How Many Thriller Novels do you plan on reading in 2014?

The popular author and producer of the hit television series, "Bones," Reichs introduces readers to a new book featuring forensic anthropologist Dr. Temperance Brennan. "Flash and Bones" is set in Charlotte, North Carolina, in the world of auto racing. Right before a big NASCAR race, a body is found in a barrel of cement at the Charlotte Motor Speedway. Investigators wonder whether the body is that of Cindi Gamble, a teenage who went missing twelve years earlier, or her boyfriend Cal.

Brennan discovers that the investigation of the missing teens was prematurely dismissed, and begins to wonder why. Meanwhile, a strange substance from the barrel begins to worry everyone in the lab. The Centers for Disease Control is brought in, and one of their employees disappears, heightening concern, and the mystery.

This book continues the fine tradition of Dr. Temperance Brennan and her co-workers. Fans of both the television show, "Bones" and the other Brennan books will enjoy this newest addition to the series. Published by Scribner.

Let us know what your favorite thriller book was of 2014 by leaving a comment below. Also, if you like zombie movies, then be sure to check out this lens on the top 100 zombie movies of all time!