Birds, Reptiles and Creepy Crawlies in English Proverbs and Sayings

I love the English language, it's so expressive and colourful, with its nuances of meaning, metaphors, puns, proverbs, and regional slang

Learn How To Include Birds, Reptiles And Creepy Crawlies In Your Conversation!

Here you will find many figures of speech about birds, reptiles and creepy crawly things like spiders, flies and even dragons.

I think you'll be quite surprised to find how many expressions there are about these creatures.

See How Many Of These English Expressions You Know

If you are English speaking, you will find this fun, and if you are learning English as a second language ( ESL or ESOL , TESOL or even TSL ), you will discover many useful phrases which will help you to improve your English in an enjoyable way, and the pictures will assist you in remembering.

Proverbs And Sayings About Birds:

A birdie - a golfing term for a hole in one

A wise old owl - somebody clever or street-wise

As the crow flies - straight

To crow - to boast triumphantly

To hawk your wares - to sell

As hard as putting salt on a sparrow's tail - almost impossible

Sing like a canary - to disclose secrets under pressure

To parrot something - to copy

A polly parrot -Someone who keeps repeating what you say

Pigeon-toed - feet that turn in

A vulture - someone who preys on other people

A Kiwi - A New Zealander

An ostrich - Someone who is hiding their head in the sand and, therefore, refuses to accept what is evident

A gannet - A greedy person

Proverbs And Sayings About Reptiles:

To Snake - To wind (e.g. a path winding through a field)

Crocodile tears - pretending to be unhappy when you are really glad

Leap frog - to go up one level

A frog in your throat - a slight cough

To toady - to act obsequiously

A Dragon - someone fiery and bad-tempered

The Oxford Dictionaries Are Some Of The Best, And Have Been In PrintFor Many Decades, With Updates To Incorporate Modern Language Changes 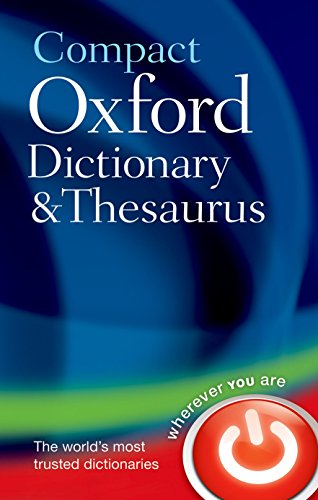 Compact Oxford Dictionary & Thesaurus
Oxford dictionaries are exellent value, and are very good because Oxford Press specializes in dictionaries. In case you don't know, the whole point of using a thesaurus is to discover words with a similar meaning which you can use in place of the word you usually use. This gives your use of language more color and variety, and, of course, it increases your vocabulary. I have been using various Oxford Dictionaries for years, and have always found them very helpful, not only when searching for words, synonyms and their meanings, but also to learn new vocabulary. When I was younger, I used to scan through a few pages just for enjoyment, to find new words and to understand their source. Many English words come from other European languages, from Nordic to Mediterranean countries, and even from further afield around the world.
Buy Now

I Wrote This Poem About A Crocodile

The crocodile is a gruesome creature
Green slime drips from every feature
His tongue is pink, his breath is vile
I do not trust his toothy smile

Proverbs And Sayings About Creepy Crawlies

Like Bees Round a Honeypot - To be strongly attracted

To be fly - To be streetwise or clever

A Fly in the Ointment - A minor irritation which spoils something

A Fly-By-Night - Unreliable or untrustworthy

Ants in your Pants - You can't sit still

At a Snail's Pace - Very slowly

A Fly on the Wall - An unnoticed observer

What Are Your Thoughts About Learning English?

Are You A Native English Speaker, Or Are You Learning English As A Second Language?

Compare your opinion with other people who have had to learn - Is English too difficult? Are there too many exceptions or too many rules?

And what about the spelling? But take heart, virtually nobody gets the spelling right every time! In fact, my grandchildren have the same experience as I did as a child in primary school - taking home a list of ten new spellings every day or two for several years to learn, with a class test the next day. It just doesn't come naturally, because the English language is derived from so many different sources. I have found that It certainly helps to spell correctly in English if you have also learnt Latin, Greek, French and German!

My Bird Design -- An Owl

Links To More About Language

It's such fun to hear from people all round the world - it never ceases to please and amaze me, sitting at my computer in London, and getting messages from every continent in the World .

So Please tell us all what you think: about English, about birds, reptiles and other creatures, or even about world events - just leave your mark.