Why books about Titanic for kids? Everyone is interested in learning more about the ill fated ocean liner these days, and that includes kids.

It's now been over 100 years since the sinking of the great ship, and many commemorative activities took place to mark the centennial last year. A number of new books about the tragic event were published, including some written especially for young readers.

There are even fictional stories that take place against the backdrop of the great sea tragedy.

Many of these are books written specifically for kids, or that kids will want to read. So, I'm seizing upon this opportunity to encourage kids to read by presenting a page of recently published books about Titanic for kids.

Front page news. It was the biggest - and worst - news imaginable.

There was no internet or television then. People got their news from the newspaper.

For a newspaper to devote the entire front page to one event meant it was most important!

When the big ship went down it shook people on both sides of the Atlantic.

This what the front page of the New York Herald looked like that day, and it was how people learned what had happened.

Popular Titanic Titles for Children Have Recently Been Published

A number of new books were published in the run up to the April, 2012 anniversary of this horrific tragedy at sea. Quite a fewe of those books were written and / or compiled especially for youngsters. Authors found that a new generation of children are gobbling up new reading material about an event that happened long before their parents were born.

Many of them, like the one shown at right, are heavily illustrated, and include lots of annotated pictures and drawings.

Explolre the Great Ocean Liner with a Book and CD

Rated for ten to fifteen year olds, but the high ratings and positive comments from adults indicate that it can be enjoyed by just about anyone.

Includes an interactive CD that 'goes inside' the ship.

All the details of the grand ship, recreated using amazing digital graphics.

109 children aged 12 and under were on board Titanic

Millvina Dean was almost two and a half months old when she sailed from Southampton with Mom, Dad, and big brother Bertram.

The family was sleeping. Awakened by a jolt, Millvina and Bertram's father went out to see what happened, then came back and got his family up and dressed. The went up on deck. Mrs. Dean and the two children escaped disaster in lifeboat #10. They never saw Mr. Dean again, but he made sure his wife and children were safe that awful night.

Bertram and Millvina Dean, PD and

Little Millvina grew up and lived a long life. A very long life. She was, in fact the very last one of the survivors left when she passed away at the age of 97. Being the last living Titanic Survivor, she enjoyed a bit of celebrity late in life. 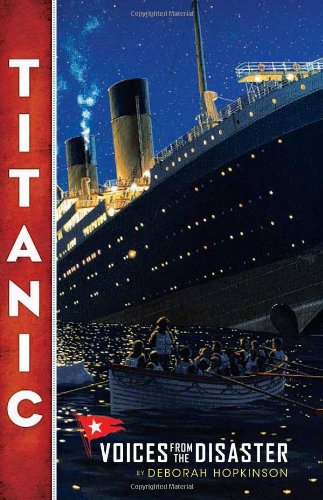 Titanic: Voices From the Disaster
This is another book that was actually written for a younger audience (ages 8 and up) but that has been enjoyed by Titanic fans of most any age. Of the over 2200 souls on board only around 700 survived the tragedy. Includes direct quotes from some of those actual survivors about the events of that night
Buy Now

How many children were lost?

age 12 and under were lost that night

What About Loraine Allison?

Loraine (2) and Trevor (11 months) were in first class. As lifeboats were being loaded, Mrs Allison had Loraine, and nurse Alice had Trevor.

In the confusion, they got separated. Mrs. Allison refused to leave until she found the baby, and never made it off the ship. She didn't know Alice and Trevor were already safely in lifeboat 11.

But the story MAY not have ended there....

In 1940, a woman claimed to be the same Loraine Allison, saying her mother finally handed her off to a Mr. Hyde, who raised her in America. The Allison family never believed her.

Some passenger listings name all 6 children in first class as survivors, making the number that perished 52. But what about Loraine Allison? She would have been number 53.

Do you think Loraine Allison survived or not?

Mystery on Board Titanic

A Fictional Trilogy by Gordon Korman

Bestselling author Gordon Korman brings you a fascinating mystery on board the one of history's most famous ocean liners. A great read for kids, with real historic details woven seamlessly into the story. Parents report being captivated by it as well, so don't be surprised if you find yourself looking forward to each new chapter if you're reading it to your child!

FOR AGES 8 AND UP

Youngsters from very different backgrounds form a bond and find themselves in the midst of a mystery on the world's most famous ship.

Paddy, Sophie, Juliana, and Alfie need to find the truth, unmask the killer...and try not to go down with the ship.

You won't want to stop until you've found out what happens to each of them!

You'll want to start at the beginning, of course. The first in the trilogy is called

Unsinkable (Titanic, No. 1) , and it's followed by Collision Course and S.O.S.

and two of them survived

Released for the Centennial

The famous ocean liner sailed for the White Star Line, and she had been built because the owner wanted bigger and better ships than the Cunard Line. The two lines were big rivals.

A number of books for kids ages 6 and over were released in conjunction with the commemoration of the 100th anniversary of the sinking of the Titanic.

Get them books about a subject that fascinates them, and watch them show a real eagerness to read.

What Sank the World's Biggest Ship?: And Other Questions About the Titanic (Good Question!)
Buy Now

"What Sank the World's Largest Ship?" is one of those books that kids will want to read.

Answers to kids' "must-know" questions about the building, launch, and tragic sinking of the most famous ship of all time. Kids are good at asking questions, and really love to get answers. This book does both - it's in an engaging modified question and answer format.

You can get it in either hardcover or paperback.

National Geographic Readers: Titanic
Recommended for ages 6 to 9 From National Geographic! The industrial feat of the building of powerful ship, the tragedy of the wreckage, and the fascinating stories of survival
Buy Now

The Shipwreck is Still on the Ocean Floor

Where the Luxurious Ocean Liner Went Down

Titanic began sinking before midnight on April 14, 1912, and it was after midnight when she finally slipped beneath the surface. She fell amost two and a half miles to the ocean floor.

The Voyage was to end in New York City, and she about 450 miles away from her destination when she sank. The nearest land to the shipwreck of the vessel is 370 miles away, at Mistaken Point, Newfoundland.

The great ship literally broke in two, and the two parts lie separately on the ocean floor, each being slowly eaten by microbes.

Bow of Titanic in 2003 Courtesy NOAA

(Lots of mail sank, too)

The Band Played As the Great Ship Sank - What was the Last Song They Played?

This is one of three tunes that MAY have been the last one played by the Ship's Orchestra, led by violinist Wallace Hartley. Give it a listen.

See Wallace Hartley and the Titanic Band to find out what the other two tunes were and learn more about these eight brave men.

Scholastic Reader Level 3: Remembering the Titanic
Age 6 and up Released in March of 2012, to tell youngsters the story of what life was like aboard the ship. In it, they can also meet some of the passengers and the crew. They'll also find out about Robert Ballard's discovery of the wreck at the bottom of the Atlantic 73 years later, and what's been discovered since. PAPERBACK
Buy Now

What do you think about the information on this page? Do you have (or know) a child who loves to learn about the Titanic?

The Guestbook Is: OPEN