The story The Zanzibar Affair revolves around a letter that is found in an old chest on the Zanzibar Island off the east coast of Tanzania. The letter holds the key to why the central character, Kate Hope, suddenly disappeared for no apparent reason; despite a privileged albeit tormented lifestyle.

Her business partner and lover, Adam Hamilton, had been keeping a secret so dark that he was prepared to lose everything to make sure it was not discovered. Even to the extent that ten years earlier he ended his relationship with Kate with no apparent remorse or explanation for his actions.

A previous lover of Kate's travels back to East Africa when a woman is found murdered in the middle of nowhere, deep in Kenya. Kate is the woman he loves, despite not having seen her for eighteen years. So he meets with her daughter Molly and together they try to piece together the last years of her mother's life and his involvement in it. Mystery and intrigue ensue as he starts to unravel the story surrounding Kate's life, and the woman he adores.

The novel spans three continents and three decades with Safari Africa as the primary location, but as the story unfolds, the book also takes you on excursions to New York and France . A high society romance that is tainted by death and betrayal. Samantha Ford has intricately plied her trade as author and fiction writer as she brings the characters to life, shares their anguish, their passion and the story behind the facade in this contemporary romance novel.

Here are a few little tasters from the book:

"The white community here lives in some kind of whimsical world, all for the sake of making big money. This isn't real life and the money is just not worth it. Thousands of Nigerians live in terrible squalor, the authorities don't bother to pick up a dead body on the road and we sit around having gin and tonics laughing hysterically at life here."

"The store was on Madison Avenue and Kate's office was on the fifth floor of the beautiful building. It was a little chunk of England in Manhattan, she thought on her first day there. Wooden floors were partially covered by expensive rugs and there were leather wing-back chairs, oak tables and huge glass-fronted display cabinets."

"Sweating profusely in the heat and the humidity and with a knot of fear and panic, Kate felt great relief when she saw a large painted stone with the name of the villa on it. Hooting at the gate, they waited for the askari, the security guard, to come. He unlocked the big gates and the car nosed its way in."

The images were impossible to bury, she had watched people jump to their deaths from the Twin Towers

The Zanzibar Affair: A High Society Novel Out Of Africa - by Samantha Ford

More than a romance, this is murder, mystery and intrigue. A story spanning three continents and several decades. 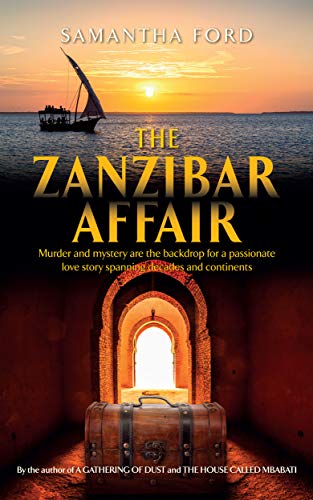 The Zanzibar Affair: A Novel Out of Africa
A contemporary romance novel set primarily in the Island of Zanzibar out of Africa that will appeal to men and women.
Buy Now

One of the best lines in the book:

There were no wild animals in New York City, only predatory females like Doctor Elizabeth Green.

The Zanzibar Affair - Video Review - A Contemporary Romance Out of Africa

Samantha Ford's compelling account of the troubled life of Kate Hope, a business woman from Africa working in the Safari industry. It is a story of star crossed lovers, relationships and mystery disappearances. Lot's of five star love for this story.

Video Review for The Zanzibar Affair

Samantha Ford is a bit of a jet setter herself and very familiar, from the perspective of an observer, with a high society lifestyle. She was originally from and brought up in the UK but has also lived in the Far East, America, France and her beloved Africa.

She has had a diverse career which has ranged from that of a journalist, including news-reading and being published in magazines, to script-writing. She has developed over the years a comprehensive understanding and love of African safaris. It is this understanding that has informed her first novel - The Zanzibar Affair.

She is very clearly a lady that has enjoyed her life's experiences and learnt how to communicate that enjoyment through her writing whilst adding the fictional elements that entertain and intrigue her readers.

Dare you rate it?

Safari Africa - A Great Backdrop For a Romance Novel

About Books and Book Reading Lists

The Voice of the Tiger - Forbidden Love & Animism Amongst Indigenous Peoples

A war romance at the time of the Malayan Emergency goes badly wrong when events overtake a couple in love. Despair sets in and Vince Tanner a naïve young soldier goes off the rails and gets lost in the Malayan rain forest only to find and be found by the indigenous aboriginal peoples.

A fascinating look at women;s relationships as viewed through the eyes of mothers and daughters. Not always flattering but very real and thought provoking.