How to deal with nasty people

At my wit's end

Around a year ago, I was kind of at my wit's end with my business associates. It seemed like we just couldn't see eye to eye on a lot of issues, and to top it off, they were being generally... well, nasty. Unnecessarily so, I thought. Anyway, this book caught my eye in a used bookstore, of all places. The price was right and I picked it up.

When I got home and started thumbing through it, I noticed how profoundly short the book was. I figured this was cool by me, since if it wasn't a great read I could sort of power through it and just finish the book, hoping to gain some insight. Well, I started reading and found myself nodding, and then saying "a ha!" to myself a handful of times. Before I realized it, dozens of pages had turned and I was nearing the end of the book.

If you're in the same situation I was in- your coworkers, bosses, or business partners just seem unnecessarily nasty and you don't know what to do, this is the book for you. 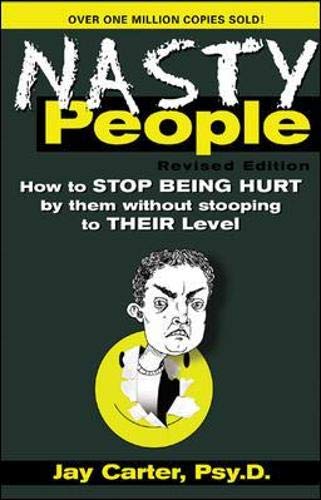 Nasty People: How to Stop Being Hurt by Them without Stooping to Their Level
Buy Now

Other great words of advice

The "Nasty People" book is golden, and tells you just about everything you need to hear in order to arm yourself for conversations you're going to have with nasty folks. The mantra might well be summed up as:

Judge not, lest ye be judged yourself.

Another particularly save piece of advice comes from Stephen Covey:

Seek first to understand, then to be understood.

These two concepts have served me extremely well over the last six months or so, as my interactions with virtually everyone have become far more harmonious overall. Don't get me wrong; I'm generally a very agreeable type of person, but there comes a time when you have to have discussions where a consensus might not be met between you and the other person. That's exactly the time to use the "seek first to understand" concept, and I can tell you for certain from first-hand experience that it's a very, very powerful idea. In the hands of a great negotiator, the world is at your fingertips. If you're not a terrific negotiator, you're still going to benefit tremendously if nothing more than by having internal peace you wouldn't otherwise have.

My friends used to joke that I was "Switzerland" with political disputes in the Brazilian Jiu Jitsu community in Richmond during the late 90s and early 2000s, and this is very telling of my personality, I think. I am certainly capable of trying to help everyone get along, but the difference is that now I'm armed with the proper tools to help me reach this goal.

This book is a great compliment to Dale Carnegie's "How to Win Friends..." and Covey's "7 Habits" classics, but much, much shorter and very easy to digest and comprehend. The metaphors are unmistakable and very easy to interpret, and at the end of the book, I certainly felt like I had a much better understanding of where my associates were coming from. Sure enough, things have gotten a little better, slowly but surely. I'm not going to kid you and say it's been all roses and daisies since opening the book, but there is now a feeling of hope with every conversation, and not nearly so much fatalism and despair.

Furthermore, I'm actually eager to have some of these conversations nowadays. Why? Because I get to practice this craft of listening, learning to understand, and coming to an agreement each time. Every nasty moment is an opportunity for me to understand the "nasty boys" in question (and, as a child of the 80s, I truly could not resist the Janet Jackson reference).

Not focusing so much energy on dealing with nasty people, or becoming a nasty person yourself, rather, allows you to have more time for some of the things in life that are truly important. For me, that involves family, taking care of pets, and being productive. I've been able to focus far more on these things since letting some of the other "nasty" things go.

Enjoy the simple things in life, like pets (family)