The Avengers in the Late 1960s: A Marvel Comics Review!

Marvel Essential: Avengers Vol. 3 contains issues 47 to 68 of the comic's original series, as well as Avengers Annual No. 2. For the most part this collection is a great run of comic books as writer Roy Thomas matures as the series goes along. The Marvel Essential series of books, each topping several hundred pages, contain the original stories in black & white rather than color.

As Strong a Collection of Late 1960s Comics That You'll Ever Find!

Roy Thomas is the writer for the entire run in this collection but he really only hits his stride with issue No. 52 when he adds the Black Panther to the team and ties the issue's bad guy, the Grim Reaper, to Wonder Man from issue No. 9. From that issue to No. 68 is as strong a run of comics that you're going to find from that time period: A crossover with the X-Men; Bucky's death revisited; the introduction of the Vision and Yellowjacket; the marriage of the Pyms; Hawkeye becoming Goliath; and several battles with Ultron.

Throw in guest appearances of the Black Knight and Dr. Strange as well as a fight with the original Avengers. Wow!

Also, except for some issues by Don Heck and George Tuska, the collection for the most part has excellent art. John Buscema does the bulk of the work, with a handful of issues done by Gene Colan, Barry Smith and Sal Buscema.

You may notice that on Amazon the book has a slightly different cover. Don't worry, it has the same content. For no reason that I can figure out Marvel Comics published different editions of its Marvel Essential books with different covers. I'm trying to find out why and if I do I will update this lens to explain it! 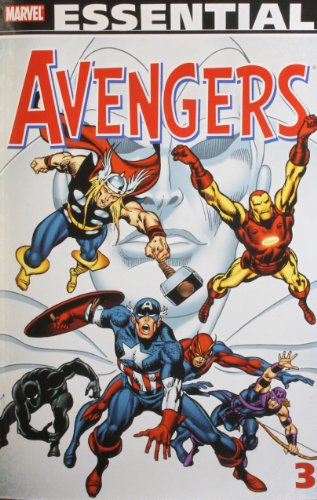 Jack Kirby drew the first issues of the Avengers, but it was John Buscema's long run on the series that really gave the Avengers its style and look. Buscema, who died in 2002, drew 30 of 44 issues starting with No. 41, which gave the series a consistent, clean look.

I can't say he was underrated, because he was always very respected. But he never got the accolades that Neal Adams or Jim Steranko received in the late 1960s and early 1970s. I think that's because Adams, Steranko, even Kirby, had styles that almost overwhelmed the storytelling. Buscema's art was much more complementary to the story being told, which I really appreciated.

Buscema later went on to become Marvel Comics' main artist for Conan the Barbarian, as well as the Fantastic Four. I have read that he eventually did an issue of almost every series in the 1960s and 1970s but I don't have any way of checking that. All I do know is that his art was always enjoyable.

Gene Colan filled in as artist for Avengers No. 63 to 65, three issues in this volume that focused on one of my favorite characters, Hawkeye! Unfortunately, Roy Thomas decided to have Hawkeye succeed Henry Pym to become the new Goliath, a change that I wasn't very fond of and one that lasted until Avengers No. 97.

In issue no. 63 he changes to Goliath to rescue the Black Widow, and then in issues No. 64 and 65 we find out his history. Amazingly, Hawkeye had been in comics for five years without ever being given a secret identity or even a real name! But in this two-parter we find out he is Clint Barton, brother of a criminal, and we learn more about his past connection with the Swordsman.

Colan does a great job ranging from the grittiness of small-time hoods and back alleys to outer space.

My Tribute to a Great Comic Book Artist!

Gene Colan died on June 23, 2011, after more than six decades of drawing comic books. He was probably best known for his runs on Daredevil and the Tomb of Dracula. But he also known as an artist with a unique style that no one ever tried to copy, and I really enjoyed it. I respected the art so much I wrote about his work in a separate tribute. I hope you visit it and learn more about what a wonderful contribution this man made to comic books.

Before he was acclaimed for Conan the Barbarian!

This collection contains two early works by Barry Windsor-Smith, who would later become famous for his work on Marvel Comics' Conan the Barbarian series. Known at the time simply as Barry Smith, he drew issues No. 66 and 67. Those are the first two parts of a great three-part story in which the Vision betrays the Avengers and rebuilds Ultron. Smith's work had a drama all its own, with varied angles and panel layouts that were different from what other artists were doing at the time.

This is one case where I prefer reading the original comics in color, because I think the colors aid Smith's work. But he uses such strong lines that in this black-and-white collection his talent still comes through.

Barry Smith and the Notorious X-Men No. 53

Drawn on a Park Bench in New York City!

As nice as Smith's art was on Avengers No. 66 and 67, his debut as a fill-in artist for X-Men No. 53 was just awful. The X-Men book had come out in February 1969, and for years was considered some of the worst artwork of the Marvel Age of comics. It was a legendary rush job, and Smith ended up working on a park bench in New York City. The Avengers books appeared in July and August of the same year, so a comparison shows just how much of a rush job the X-Men art must have been.

For more on the X-Men work, see our review here:

Spider-Man, X-Men and much more!

The Marvel Essential series reprints many of Marvel Comics' stories from the 1960s on in large volumes that usually top several hundred 500 pages. The series began in 1997 with the publication of the Essential X-Men No. 1 and The Essential Spider-Man No. 1. Many of the volumes have been printed more than once, with different covers on some of them, so don't let that throw you off when buying. Carefully check to make sure which volume number you are considering. The huge advantage to these volumes is cost: a reader can get 30 or more stories for about what a half dozen new comic books cost, and the old stories have more pages of action per issue. The Essential books are much more cost-effective than buying all the original comics as well.

Which Character is Your Favorite? - The Vision? Yellowjacket? Ultron? You Decide!

Roy Thomas introduced a number of characters in this run of the Avengers that have become mainstays of the Marvel Universe. It is amazing that stories more than 40 years old are still influencing comic books today, but that's also what makes the comic books so much fun. I'd like to hear which of the characters introduced in this volume is your favorite. The image here of the Vision fighting Ultron is from the back cover of the Marvel Essential book. Both characters debut in this collection. I think the Vision is probably the one that is the most popular and most important, but I always liked Yellowjacket as he appeared here and in the Defenders. Now it's your turn to speak up!

Which of These Characters do You Like the Most?

Articles on Other Comic Book Artists

In addition to the appreciation of Gene Colan mentioned above, we have written articles on two other comic book artists that are true legends. Check them out here:

Joe Kubert, Comic Book Artist: An Appreciation
Comic book artist Joe Kubert died on Aug. 12, 2012, after more than seven decades of drawing and creating comic books. Over those many years he worked on a w...

What do you think of this Marvel Essential: Avengers Vol. 3, The Avengers, the artists or just this lens? This is your chance to comment!

What Do You Think of the Avengers? - Here's Your Turn to Speak up!