Read this fox fairy tale, a modern animal folk tale of the Israel and Iran Conflict. This animal fairy tale is a modern fable on two levels, for young and old.

Clearly, world sanctions and sentiments have done nothing to stop Iran in its development of the doomsday weapon. As the crisis reaches critical mass, Israeli citizens were issued new gas masks and new instructions in the event of attack.

If you want a simple explanation of the Israel and Iran conflict appropriate for children, read this fox fairy tale. (The animal folk tale for grownups is also included.)

Writer Fox™ so solemnly swears that what follows is an official directive from the Wadi Homefront Defense Ministry, issued to all Fennec Foxes to be read to kits (not a typo) to comfort them in these troubling times.

Once upon a recent time, ol' Fox found hisself in a mess o' consternation.

His ol' Cuz was a makin' a big ol' club an' a fixin' to come after ol' Fox an' give him a wallop upside his big ol' ears an' knock his little ol' head clean off.

His Ima done said ol' Uncle to be a dealin' with ol' Cuz, an' ol' Fox should jest be a mindin' his patience, that he should. She said, "You'll bring us a world o' trouble from ol' Uncle if you go a scratchin' after ol' Cuz."

An' Ima jest fuss an' fuss all night at ol' Fox. An' all the while ol' Cuz was jest a makin' that big ol' club a bigger an' a bigger, an' ol' Fox jest couldn't get a good day's sleep a thinkin' about it all. 'Sides that, ol' Fox figured that ol' Cuz, mean as he be, might jest take a wallop at ol' Uncle with that big ol' club he was a makin'.

Ol' Fox thought time done run out, an' he done made up his mind to take care o' things.

The Fox in the Oil Patch

So, late one night ol' Fox got hisself a plan an' he lit outa his fox hole an' went a sneakin' off to the oil patch. An' he found that place where ol' Cuz was a makin' that big ol' club an' he done set it on fire, he did.

An', lawsy, what a fire did burn in that oil patch!

An' ol' Fox flew 'way from there as fast as he could an' he ran right into big ol' Uncle a standin' in his way as tall as a tree, as tall as ol' Fox was small.

Now ol' Fox knew ol' Uncle was serious an' there weren't no way o' negotiatin' outa punishment. But ol' Fox had a plan for this all along.

So ol' Fox says, "You have every reason to be angry ol' Uncle, an', whatever you do, please, oh please, don't throw me to the peace table with ol' Cuz."

Ol' Uncle watched ol' Fox be a fearful an' be a shakin'. He decided that throwin' ol' Fox to the peace table with ol' Cuz was just what he'd do, an' that ol' Fox couldn't sign no 'greement if he had no arms.

Soon ol' Fox was jest rollin' over an' a laughin' an' a laughin' till he could laugh no more, 'cause he knew all along that ol' Cuz would never be there at the peace table an', sure 'nough, he wasn't. Oh, no he wasn't! Just like ol' Fox thought, ol' Cuz was in the oil patch startin' to build a new big ol' club for to come after ol' Fox.

But ol' Fox ran all the way home to his den an' sat right down to his own little table an' his Ima's rabbit pie.

Now ol' Fox knew that he might jest have to do it all over again when ol' Cuz start makin' that new club a bigger an' a bigger.

But he jest thought to hisself that'd be alright, so long as he could come home to his safe little den an' his Ima's rabbit pie.

An' then he slept all day long with a funny little grin on his furry little face.

(No animals were harmed in making this webpage.)

What is the best moral of this animal folk tale?

Prizes for Choosing the Moral to the Story

If you picked a moral for the fox fairy tale, you get to buy your prize from Amazon. 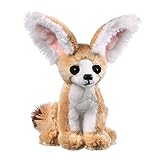 You can choose this soft, squeezable fennec fox and have it gift-wrapped, too.

Bedtime stories will never be the same with this little guy to cuddle with.

This animal folk tale is written in the Gullah dialect that was spoken in the deep South at the time of the American Civil War. It was forever memorialized by Joel Chandler Harris in his Uncle Remus stories (translated into 40 languages and in print since 1880) and later in the Walt Disney Movie, Song of the South released in 1946.

Joel Chandler Harris acquired the dialect as a teenager while working on a southern plantation. He was captivated by the animal tales and trickster stories that African slaves brought to America from their native culture. Many of the Uncle Remus tales were first published in the Atlanta Constitution newspaper where Harris worked as a journalist.

Writing in his biography, Mark Twain recounts reading these stories to his children, much to their delight. Mark Twain wrote of Harris, "In the matter of writing [the African-American dialect], he is the only master the country has produced."

Perhaps the most famous Uncle Remus animal tale is The Adventures of Br'er Rabbit.

This is the most comprehensive collection of Uncle Remus tales, weighing in at 848, beautifully illustrated pages. It is called the "treasure trove of African American folklore." These animal tales are for readers age 12 and up, but younger children love hearing these stories read. There is an ample glossary in the back that helps with the dialect. This is the classic edition for your library.

Author, civil rights activists and former leader of the NAACP James Weldon Johnson said that this collection is

"the greatest body of folklore America has produced."

The Complete Tales of Uncle Remus
Put this great American classic in your library.
Buy Now

Israel and Iran Conflict - The Tale for Grownups

A nuclear missile launched from an Iranian land-based facility will hit Tel Aviv in eight minutes, much less time if launched by sea. One analyst projects:

"Fallout from a single, 1 megaton surface blast would kill every living thing inside a 90 mile/145 km radius. The environment within a 160 mile/257 km radius would be poisoned for at least a decade. Firestorms would erupt that could not be extinguished. Imagine the carnage from multiple warheads."

From the pilot's cockpit, watch the most powerful nuclear bomb in human history as it is dropped.

"Those who think they can revive the stinking corpse of the usurping and fake Israeli regime by throwing a birthday party are seriously mistaken. Today, the reason for the Zionist regime's existence is questioned, and this regime is on its way to annihilation. They should know that regional nations hate this fake and criminal regime and if the smallest and briefest chance is given to regional nations they will destroy it."

"The nations of the region will soon finish off the usurper Zionists [Israel] in the Palestinian land. A new Middle East will definitely be formed. With the grace of god and help of the nations, in the new Middle East there will be no trace of the Americans and Zionists."

Israel and Iran - the Present Threat to America

True Tales for Grownups - All Published in 2012

"Iran: The Nuclear Challenge maps the objectives, tools, and strategies for dealing with one of the most vexing issues facing the United States and global community today."

"The Council on Foreign Relations (CFR), author, is an independent, nonpartisan membership organization, think tank, and publisher dedicated to being a resource for its members, government officials, business executives, journalists, educators and students, civic and religious leaders, and other interested citizens in order to help them better understand the world and the foreign policy choices facing the United States and other countries."

Iran and the Bomb

"Released as policymakers in Washington and other capitals debate whether to deal with the Iran question once and for all, Iran and the Bomb contains everything needed to understand the crisis and develop an informed, independent opinion on what should be done about it."

Iran and the Bomb: Solving the Persian Puzzle
Buy Now

"Assassinations, computer viruses, and Western sanctions might not be enough to stop Iran, the authors argue. They outline the choice Israel faces: launch a military strike, which could lead to an all-out regional war, or tacitly accept a nuclear Iran, which would lead to a new balance of power in the Middle East. In 2012 Israel appears closer than ever to making a decision."

Yaakov Katz, co-author, is the military correspondent and senior defense analyst for the Jerusalem Post and the Israel correspondent for Jane's Defence Weekly. Dr. Yoaz Hendel is a military historian, a lecturer at Bar Ilan University, and a director in the office of Prime Minister Binyamin Netanyahu. He has also served as a military affairs columnist for Yediot Ahronot, Israel's largest news daily.

Read the Writer Fox in depth article about Israel and Iran on Israel National News.

Read about the Israel and Iran conflict from the perspective of history:

Read about the Jewish holiday and what it means:

Learn the Hebrew Letters and the Hebrew Alphabet in this free online tutorial with alphabet cards and videos for learning Hebrew.

Read about the significance of the city of Jerusalem in Judaism:

Find a home in the homeland with: