SIMILARITIES BETWEEN PUBLIC SPEAKING AND CONVERSATION

SIMILARITIES BETWEEN PUBLIC SPEAKING AND CONVERSATION

How much time do you spend each day talking to other people? The average adult spends 30 percent of her or his waking hours in conversation. As you will see, there are many similarities between daily conversation and public speaking.

Children learn the art of conversation by trial and error. A toddler says, “Cookie!” to persuade her father to give her a snack. A five-year-old tells a little story to entertain Grandma and gain admiration. If nether of these things works—the cookie is not forthcoming, Grandma is not amused—well, back to the drawing board. Next time the child will try it a slightly different way.

By the time you read this book, you will have spent much of your life perfecting the art of conversation. You may not realize it, but you already employ a wide range of skills when talking to people. These skills include the following:

Each day, in casual conversation, you do all these things many times without thinking about them. You already possess these communication skills. And these are among the most important skills you will need for public speaking.

To illustrate, let’s return briefly to one of the hypothetical situations at the beginning of this chapter. When addressing the school board about the need for a special teacher:

The Similarities Between Public Speaking & Conversation ... 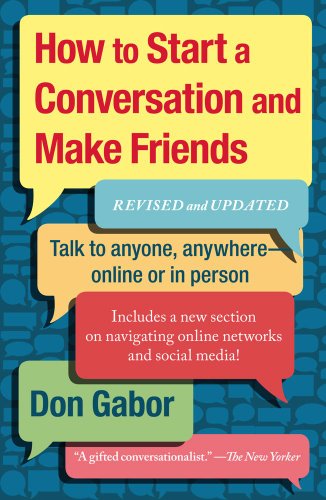 How To Start A Conversation Make Friends
Buy Now