From the Primordial Era to the Dark Era, a Physics Book Everyone Can Understand 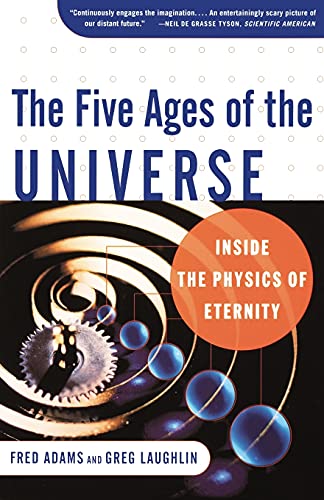 The Five Ages of the Universe: Inside the Physics of Eternity
Buy Now

Taking a glimpse into the past

What happens five billion years from now? How about 100 billion billion billion years from now? What about an unimaginably longer time than that? This book really delves into the absolute best we could speculate (at the time the book was written) based on hard science, blended with a great deal of creativity, what is going to happen to the universe well into the far future.

I strongly credit this book with helping me understand many of Kurzweil's Singularity concepts, especially the "ultimate laptop" idea from "

The Singularity is Near." Fred Adams and Greg Laughlin start with the Primordial Era - the very beginnings of the universe that include, of course, the Big Bang itself, along with the soupy, formative era that followed, preceding the creation of the firs starts. The Stelliferous Era comes next, and that is the epoch in which we presently find ourselves. This era will last about another 100 trillion years, an absurd amount of time in its own right, but a mere drop in the bucket compared to the era that follows, the Degenerate Hole Era.

This book opened my mind up to the amazing nature of the universe, in all its majesty more awesome than anything human beings have ever imagined it to be.

A glimpse into the concepts

Peering into the distant future

The authors make the unfathomable expanses of time each epoch takes up - and each subsequent era is many, many, MANY times longer than the preceding one- actually comprehensible to my puny, mortal brain. Sure, the dark energy concept and the accelerating expansion of the universe isn't discussed (the book was written just as Saul Perlmutter and Brian Schmidt were formulating the theory and presenting evidence of these game-changing concepts, but this book stands alone as an amazing journey of discovery across unimaginably vast expanses of time and space. It is well worth reading.

If you're unclear as to why a book that doesn't include the latest updates on how nature really works is worthy of your attention, consider reading this article I wrote on the subject. Suffice it to say, it's worth going though the thought process these guys went through, coming to similar conclusions (or not), and checking out something nobody else has really written about in the same way. This visionary description of the universe changed the way I see things, and it can do the same for you.

"Five Ages" sits on the shelf alongside Einstein and Feynman

After the familiar "Stelliferous Era" (where we are today), about 100,000,000,000,000 years from now (give or take a decimal place), the burning stars of today are no more, and what's left are nothing but brown dwarfs, white dwarfs, and black holes. Our sun will eventually become a white dwarf (just five billion years from now or so). White dwarfs will continue to burn, theoretically, because they will "eat" dark matter and use it as nuclear fuel. Meanwhile, proton decay begins to occur, signaling the beginning of the end of the Degenerate Era.

The end of space and time

The Degenerate Era comes to a close when protons decay, and we're left with only black holes as the "organized matter" constituents of the universe. This era continues until literally a googol years from now (10100), or a one followed by one hundred zeros. Even the black holes aren't forever, though, as Hawking radiation allows all of the matter to slowly evaporate from them. The only thing left will be photons, electrons, positrons, and neutrinos. The universe makes an eternal sad face.

The ultimate fate of the universe

At long last, ten googols or so of years have passed since the present day. To say the least, things are a bit... sparse. Billions of years pass without any sort of incident, and time takes on an entirely different sort of meaning. Positronium atoms form from electrons and positrons, possibly being as far away from one another as the observable universe is today. Eventually, though, even the positronium atoms will annihilate, but they'll have their day, a far longer existence than the remainder of time up until this point put together and multiplied by ten. The authors bring things back to a very similar description of the possible pre-Big Bang universe situation, and speculate that perhaps the cycle begins again.

The universe at a glance