So the next book I am going to read is certainly not from my normal repertoire, but it will be a new literary adventure and what better book is there for your next book to read than one that has not yet been published?

That statement may leave you a little puzzled until you are made privy to the fact that I format and publish books for a living and when you do that, it is always a good idea to at least read what you are publishing. So I have to say, I get to read a lot of books that I would never have previously considered and I think that a gay romance with ecclesiastical connotations certainly fits into that category. But I also think there is a little something in everyone that likes a really good bit of gossip and gay clergyman working for less than sympathetic bishops in the holy sanctuary of the church does smack of being a really good bit of gossip.

So if like me, this is not a genre you would previously have considered, perhaps you should reserve your judgement and see what happens. It could well be a ripping good yarn that blows the top right off the church or at least gives it a good poke in the ribs and wakes it up to the possibility there could be a little bit of hypocrisy in the ranks. Either way I am a little intrigued to find out.

The Burning of the Love Letter

"The hands that gripped the letter were shaking, trembling with anger. They were the stubby hands of a fifty-something woman, grown large with child-rearing, comfort eating and years of diminishing self-esteem."

Gay Before God - The Story of a Man's Sexual Awakening

From a lofty position within the church, having married and produced children, is it a good idea to now pronounce that you are in love and that it is with another man. Will the church accept this particular revelation or perhaps even more importantly will families and friends accept this new fledgling relationship that is set to turn worlds upside down. 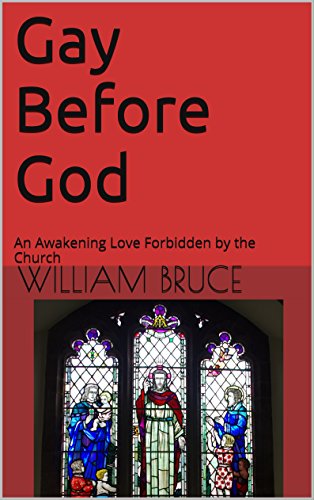 Gay Before God: An Awakening Love Forbidden by the Church
A very topical fictional story of gay life within the church system.
Buy Now

A married man with two children, who holds a high level post with the Church of England, is spotted leaving the cinema with another man, ironically after a viewing of Brokeback mountain. Rumours of a gay affair ensue and church dignitaries are made aware of a potential scandal. Ideas on how to deal with the matter differ, but with an important church conference looming one thing is agreed, the situation must be sorted out quickly and with little or no fuss.

Trouble is James, who is at the centre of the scandal is no shrinking violet and a man of integrity, Despite being married he instinctively feels that a cover up is not the correct course of action and he prefers to rationalise his situation from a theological perspective. He is driven to fulfil his desire for a new love and likens his desperation to that of a deer panting for a refreshing stream, a symbolical image from the bible, enraging the archdeacon in the process.

To complicate matters even further, his new partner is still in a gay relationship with another man, albeit he has been trying to escape from that relationship for years. The affair splits opinions between families and friends, some approve and some are outraged with no intention of leaving the lovers to enjoy their new found relationship in peace.

James and his gay lover Terry move in together hoping that the dust will settle and everyone will accept their partnership. But Terry becomes seriously ill and his family step in, removing James and blocking any further relationship between them. Some might even say they were getting the rewards of their sins as a result of their homosexual relationship! Terry is paralysed, confused and unable to prevent the actions of his family, but he knows he still loves James and tries during a moment of lucidity to send James a letter. Unfortunately the letter is intercepted and destroyed, the book begins with the burning of the letter by Terry's mother.

Motives and morals of everyone are going to be scrutinised in this book, family, friends and the sometimes less than holy members of the church.

So now you know as much as me, but once I have finished reading the book I will provide a review of what I thought of it and update the article. But for now you will have to be patient, there is much to do when you publish a book and the process has only just started. So bookmark this lens and pop back later to see my review of the book.

An Author of Gay Romance Novels

He is a vicar who happens to be gay, once a respectable married man with a wife, two children and a good job with the church he met someone and his life changed forever. When he met and married his wife he was sincere, but suddenly he had discovered who he really was.

During the events of his life he has met many fascinating people from all walks of life, some sane and some a little mad. It is because of these encounters that he is spurred on to write and write again. He loves an entertaining story that engages others and raises a few philosophical questions, what could be better?

That interface between love and duty, of feelings and respectability. The lines that are drawn between what you would like to do and what you know will be accepted or rejected, what is acceptable and what is not. A dilemma faced by many people but never more so than those that work for, or are in institutions like the church. The human elements that can place you sometimes into a state of despair but that provide the contrast to the good times and the realisation that life can be good and worth living.

When he surveys his territory from the village he lives in, he knows that under every one of those roofs there are stories of excitement, sorrow, disappointment and of course stories of resilience where there is a will to carry on despite what the world says or does. There is no story more gripping than the ones, like his, where there is a secret to be shared.

I love you more than anyone else. I write this while I still can.

Gay Before God - The Review

I promised a review of the book Gay Before God when I finished it, so true to my word here it is.

I have to say it was a bit of a shocker, not because it was full of gay sex or sordid scenes, quite the contrary. This book was a true examination of hypocrisy, jealousy and small mindedness. But I cannot say that it was a story of total discrimination against a minority i.e. gay people, because the main perpetrators of the worst behavior described in this book was by the gay contingency involved, either hiding behind the protection of the church or under the guise of a lover scorned.

Basically what happens is that a gay priest, James, is smitten and falls in love with another man and as a result he determines to put his new gay lover, Terry, before everything else, career, family and long standing friends. In other words he gives up everything for his new love. He commits himself 100 percent to the relationship and then, when his lover is struck down by a terminal illness, all plans for the future are destroyed and his whole world starts to unravel.

Despite this, he stands by his partner, caring for him, looking after him and putting up with his very spiteful family and even worse, a former lover who has a strong relationship with the family and especially Terry's mother.

As a former priest you would think under such circumstances he could turn to the church for comfort and solace. Not so unfortunately, ostracized by church, family and friends he is left vulnerable and exposed, ill equipped to deal with the hate campaign levied against him by Terry's former lover and family. Aided and abetted would you believe by some members of the very church he served for many years.

This is where the real story actually lies, it is not the fact that this is a gay couple that seems to matter in this book. It is the way he, as a new partner, is treated by the family and former boyfriend at a time when he has to come to terms with the fact Terry hasn't much longer to live in this mortal world.

They work tirelessly to sour the relationship, to ensure property and worldly possessions stay in the family and that James ultimately is removed from the role of support he is providing so that they can block the access to the man he dearly loves.

There isn't much more that can be said without spoiling the story, you will need to read it to experience the vindictiveness of their actions and ultimately whether they are successful in tearing the lovers apart forever under such dire circumstances.

A dagger through the heart is a very good symbol of what happens in this story, which could be true of many relationships where unexpected events overtake a relationship and people start to lose all control and direction over their lives.

Would you read a gay romance novel?