The Hunger Games Trilogy: The Story of Katniss Everdeen

The Hunger Games, Catching Fire and Mockingjay are the three novels in the trilogy comprising the story of a young girl living in a dystopian society. Panem is a future American dictatorship where the children of its citizens must register to compete in a televised reality TV competitive fight to the death. Reminiscent of the short story The Lottery by Shirley Jackson, the Hunger Games trilogy explores the struggle of one girl's fight against the established order.

Compelling, chilling and ultimately hopeful, the Hunger Games trilogy is an enthralling tale.

Fire is catching!...And if we burn, you burn with us!

My Review of Mockingjay, Book 3 in the Hunger Games Trilogy

SPOILER WARNING! Do not read if you plan to read the books

Much bleaker than the first two novels in the Hunger Games trilogy, Mockingjay is as much a character study in post traumatic stress disorder as it is a climactic resolution to the events in the dystopian world of Panem.

Katniss was a strong character in the first two novels. She did what had to be done to protect her family, no matter the costs. She didn't spend time dwelling on the fairness of her fate to be a Hunger Games competitor, but rather accepted her lot because she knew she had little choice in the matter. Just as she accepted responsibility for providing for her family after her father died and her mother proved unreliable. It was left to Gale to grumble and rage against the Capitol, because that was who he was. Katniss just endured and existed. If she exhibited a glimmer of rebellion during her interviews at the Hunger Games, it was arguably just the exhaustion and stress of the games to blame. She wasn't the iconic figure of hope that her stylist Cinna wanted her to be; she had yet to become the Mockingjay. But there was a small spark inside of Katniss that promised to be a flame. The question was whether it would burn brightly or consume her.

By the time the action begins in Mockingjay, Katniss has lived through two Hunger Games and come out the other side severely scarred - physically and emotionally. When she arrives in District 13, she spends most of her time hiding and trying not to attract any notice or attention. She wants to be left alone, to be free to return to a semblance of her old life hunting with Gale. Far from the "Girl Who Was on Fire" - the enigmatic, defiant and confident survivor of the games, Katniss is just a young girl trying to survive.

When the District 13 resistance pushes Katniss to be their "Mockingjay," she refuses at first because she is a tired, defeated shell of herself. She wants neither the fate nor the responsibility of everyone resting on her shoulders. She eventually agrees when she realizes that their only hope is for the resistance to overthrow the Capitol if there is even a chance for a better life for Panem. But when she learns the true plans the leaders of District 13 have in mind, Katniss again reacts with quiet resolution and does what she knows must be done - to survive.

By the end of the novel, Katniss is the same defeated, tired survivor, but she has a bit of hope for the future. She knows that her children will not have the threat of the Hunger Games. She knows that a future is possible and that bringing children into the world is not the frightening prospect it once was now that there is some hope in the world. But Katniss lost her spark long ago. She grew old in spirit well before she aged in years. She just continues to do what she has always done - back when she lived in a world where there were Hunger Games. She continues to survive.

Mockingjay (The Hunger Games)
The Games are complete and Katniss becomes an unwilling leader in the fight against the capital.
Buy Now

What did you think? - Did you like the series? Hate it? What about it did you like or hate?

anonymous: I LOVED the series, but I wanted Katniss to marry Gale, and I cried when Prim died! It should have been a set-up (not a real murder) and she should have married one of Gale's brothers!

What did YOU think about the Hunger Games trilogy? 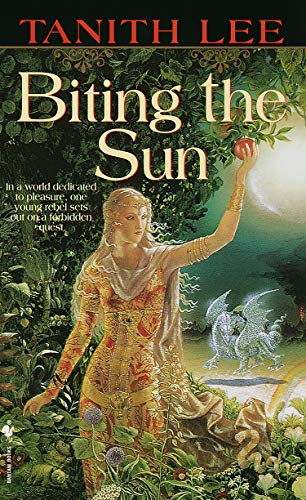 Biting the Sun: A Novel
Popular Fantasy writer Tanith Lee writes about a futuristic society where there is no murder, no crime and only happy people cared for by the androids whose role is to serve humans. Then one rebellious girl decides to shake up the system.
Buy Now

Do you have any good book recommendations?