In Between The Sheets By Ian McEwan

In Between The Sheets is a collection of short stories by award-winning author Ian McEwan, first published in 1978.

Like McEwan's earlier short story collection, First Love, Last Rites, the individual stories in In Between The Sheets, are linked loosely by theme - in this case relationships and sex.

In an interview in 1979, McEwan described the stories in In Between The Sheets as:

"They were a kind of laboratory for me. They allowed me to try out different things, to discover myself as a writer."

There are seven stories in In Between The Sheets as follows:

Each story is summarised individually below:

Hell hath no fury like a couple of women scorned...

An arrogant, feckless, under-achiever sleeps around. Eventually he contracts a sexually transmitted disease but doesn't bother to tell his sexual partners. Two of his disgruntled lovers eventually cotton on to his philandering ways and together, hatch a sado-masochistic plot to seek their revenge and at the same time, ensure that the anti-hero could never repeat his bad behaviour.

"Reflections Of A Kept Ape"

A female "one hit wonder" best selling author develops writers block. Anxious to produce another blockbuster novel, she decides that the best way of awakening her "muse" and thus stimulating her creative juices is to embark upon a sexual relationship with her pet chimpanzee. The story has no dialogue and is told from the viewpoint of the chimp after the end of the "relationship".

Picking up the pieces...

This two part tale is set in a post apocalyptic London and follows two days in the life of a young man as he tries to care for his young daughter and hold the threads of normality together.

"Dead As They Come"

This tale concerns a 40-something multi-millionaire, veteran of three failed marriages and his descent into madness as he falls head over heels in love with a fashion dummy he sees in a shop window displaying clothes for sale.

Managing by subterfuge to purchase the mannequin, he takes her home and installs her as his "wife". He lavishes clothes, gifts and long romantic dinners on her, pours out his very soul and makes passionate, energetic love to her. He is hurt and perturbed though, to find that no matter what he does, his "wife" remains cold and silent.

Eventually his dreams of perfect love come to an end when the (clearly disturbed) man becomes suspicious of "Helen" (the dummy) and concludes that she is having an affair with Brian (the chauffeur). Eventually his jealousy and disturbed mental state get the better of him and unable to cope with Helen's rejection and deceit, he murders her before trashing his art collection.

"In Between The Sheets"

Growing up is hard to do...

This story told from the perspective of a divorced man whose bitter ex-wife hates him. The pair reluctantly get together in a cafe where they discuss the upcoming birthday of their teenage daughter.

Later, he receives a letter from his daughter in which she asks him for money to buy a record player. The man feels he is being exploited, so he initially refuses, then in retrospect feels guilty, so he ends up sending his daughter more money than she originally asked for. Still struggling with his inner guilt for being divorced from her mother, the man goes out and buys his daughter lots of birthday presents. He then decides not to give them to her.

On the day of his daughter's birthday, the man goes to his ex-wife's house to celebrate with his daughter and for the first time, he meets his daughter's best friend and is surprised to discover that she is a 3 foot high female dwarf. The daughter asks if she and her friend can come and stay with him in the holidays. He agrees.

For reasons that are unclear, he then decides to give all of the withheld birthday presents to his daughter after all.

"To And Fro" by Ian McEwan (from In Between The Sheets)

I can add very little more as despite several attempts to obtain some meaning from this story, it's hard to do so. The premise is basically a man lying in bed after making love to his partner and letting his mind wander . It's the sort of abstract mish-mash of vaguely related ideas that come as you're in that no-man's land between being awake and being asleep...

"Psychopolis" by Ian McEwan (from In Between The Sheets)

An English man travels to America. He meets a woman called Mary who quickly becomes his lover. So far so good...it goes downhill rapidly though. By halfway down the page, Mary has demanded that she spends an entire weekend shackled to his bed...the plot then meanders around the man's experiences with assorted American oddballs as he gets increasingly bored and disenchanted.

I had read Ian McEwan's "The Cement Garden" at around the same time as he was being hyped for his literary skills due to the success of the movie adaptation of his best selling novel "Atonement". I enjoyed The Cement Garden so much, I wanted to read more of his writing and my research told me that some of his early work was in a similar, somewhat macabre style. I generally regard short story collections as a little like one of those boxes of assorted sweets popular at Christmas - there are some great ones, some OK ones and some that you just don't like at all.

Unfortunately, unlike a box of assorted sweets, I just didn't like anything I found in In Between The Sheets. I felt that McEwan wrote the whole collection as though he was determined to prove that he was controversial.I mean - bestiality (Reflections Of a Kept Ape) - that's just one big "NO" isn't it - and the midget lover in (n Between The Sheets - did he make her a midget to give the story some kind of "shock value"? I can't see her size added anything to the tale apart from yet another layer of sheer bafflement for the reader in what was already a random series of pointless scenarios.

I realise that he was young at the time and with age (usually) comes wisdom, but while McEwan is without a doubt an excellent writer and a good storyteller (the two things are not one and the same), this collection just left me feeling massively disappointed.

Many of the plotlines are gratuitously sleazy and while in no way a prude, I found them rather nasty (Pornography, Reflections Of A Kept Ape, Dead As They Come and In Between The Sheets). One of them were quite simply unintelligible (To And Fro). Some were dull (Two Fragments and Psychopolis). Nothing stood out as good, let alone great.

I'm aware that literary critics heaped praise on the young Ian McEwan and the reviews of this collection were good - but I'm just an ordinary person with no pretensions to be a professional book reviewer and In Between The Sheets just left me cold. Had I read this collection as my first experience of Ian McEwan, it would have been my last.

In Between The Sheets is available from Amazon.com 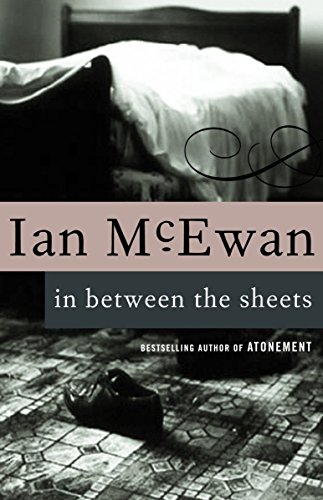 In Between the Sheets
Buy Now

Have You Read In Between The Sheets? Did You Like It?

Did you enjoy the stories in In Between The Sheets?

In Between The Sheets comes in at number six on this personal list of a reader's top ten books by author Ian McEwan: