Eve Bunting's in the Haunted House, a Not Too Scary Children's Book Review

Looking to visit a haunted house with your very young children? Want a book that has plenty of Halloween spirit and is just a little bit spooky? Check out Eve Bunting's In The Haunted House and prepare to be just a wee bit frightened for this children's picture book is just exactly that - a wee bit spooky - and it is perfect for those children aged three to six.

Follow along with the feet of two children, one an older child and one a younger one, as Eve Bunting takes you on a tour through her haunted house where you will meet a vampire, a mummy and a few ghosts along the way. This rhyming haunted house is both scary and silly and features a surprise ending. The interesting artwork was drawn by artist Susan Meddaugh.

On this page, you will find more information about Eve Bunting's children's picture book, In The Haunted House, as well as a few more of the best haunted house books that are available for very young children.

Reviews of In The Haunted House

A few reader reviews of In The Haunted House:

Krista F. says she started sharing this book with her children when they were around four years old and that at ages six and eight they're still enjoying it.

L. Hudson says her sons, aged 3-1/2 and 21 months want this book every night. She says the artwork grabs your attention and the prose reads nicely, with added sound effects for the Halloween creatures, of course. She says it is not too scary because there are hidden items along the way to explain away the spooky stuff and that you can point out those items as you read. She recommends this book for children aged 18 months right on up to 5 years old.

Finally, Mandy W says that she first picked this book up a the library and that her sons quickly memorized the cute rhymes. They enjoyed being spooky when they repeated it. and they loved it enough that she had to add In The Haunted House to the collection of her boys. 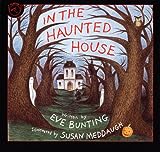 "Who's in the closet, dark as a tomb

Rattling his bones in the gloom-gloomy-gloom."

Who Is Eve Bunting? Why She's The Award-Winning Writer and Author Of Scary, Scary Halloween

Eve Bunting grew up in Ireland amongst a strong storytelling tradition. As an adult with three children, she moved with her husband to California where she eventually entrolled in a writing class. She was uncertain of how writing would work out but had that uncertainty removed when she published her first story and then her first book. Since then, she has written over a hundred books for children and young adults.Ms. Bunting says, "One of my greatest joys is writing picture books...the pleasures of telling a story of happiness or sorrow in a few simple words...I like to write picture books that make young people ponder, that encourage them to ask questions." She does so very well! So well, in fact, that she has been the recipient of many children's awards including the Golden Kite Award from the Society of Children's Book Writers and Illustrators and the Caldecott Medal (for the illustrations in one of her books). She has also taught writing and lives in Pasadena, California.

Who Is Susan Meddaugh?

Who is Susan Meddaugh? Why she is the celebrated illustrator who illustrated this book, In The Haunted House. She was a student of art and illustration and originally came from New Jersey. Now she resides in Massachusetts with her family and her dogs. She is the author and illustrator of the Martha Speaks children's book series, which was on the New York Times Best Illustrated List in 1992.

Another fun Halloween book by Eve Bunting that is scary but not too scary for your young children. Read my complete review of Scary, Scary Halloween by clicking right here.