With an extra invitation to the V Jump Festa, my girlfriend asked if I wanted to tag along. She told me it would be a different look at Japanese culture.

She had a point, I had mostly explored ancient temples, shrines and festivals. I had shied away from Japanese pop culture but I didn't know why. I grabbed my camera and bag and was on my way.

V Jump Festa is an expo held every summer at the Intex Osaka--one of the largest exhibition centers in Japan.

At V Jump Festa, fans of "Weekly Shonen Jump" comics can get a closer look at what's hot this year and see what's new for next year. This includes anime, movies, manga, toys and video games.

In other words, anyone over thirty will take on the mighty roles of ATM to buy things for the shonen (elementary to middle school kids). Others will be pack animals to carry said things for the rest of the day... Or so I thought.

I'm not a big fan of comics or anime but V Jump Festa gave me an insight of Japanese culture for the manga-lover's soul. This is something I've been interested in ever since I got here but never got around to exploring.

But did I have fun? Keep reading and find out!

On the way there, I was told that I might not be able to get inside. See, admission is by invitation only. Weeks ahead of the expo, a fan must fill out and mail a special postcard to Jump Comics.

These postcards are only available in issues of "Weekly Shonen Jump." From these postcards, only a few hundred receive an invitation. These are the true believers--the die hard fans (and their parents).

In other words, nobody gets in by accident. People who just want to take a peek or have nothing else to do will not get in.

Also, this event is held at the Intex Osaka. The Intex Osaka is in Suminoe-ku, south-western Osaka. By train, it's almost an hour away from downtown Osaka. It's about the same by car and there's plenty of parking (not free but reasonably priced). In other words, in the summer heat, people have to go out of their way to get here.

My girlfriend was accompanying two children too young to travel on their own. Each of them had an invitation. I was joining them. To our great relief, each invitation allows one fan and one adult. It was a good thing, too because V Jump Festa didn't disappoint.

All the most popular manga that "Weekly Shonen Jump" publishes were there: One Piece, Bleach, Toriko, Gin Tama and many others. I had no idea what was going on. Within an hour, I was sitting down wondering when I would go home. 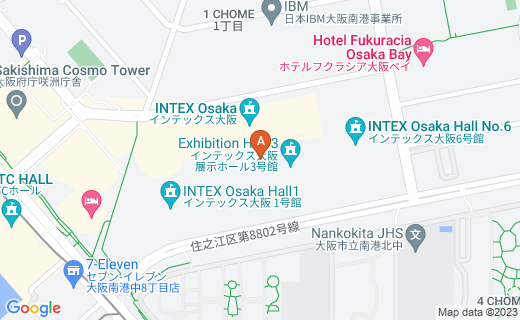 Looking around, I saw adults as well as children enjoying themselves. At first I thought it was odd; I had never seen otaku so close. I thought I'd take a better look around.

I knew I wasn't going to find anything traditional or ancient at V Jump Festa but that was the reason I came here. It was noisy and crowded but so were the festivals I enjoyed so much.

It was a refreshing break from the quiet, solemn atmosphere of the shrines and temples. While taking a few pictures I even got myself a few postcards I love so much.

Two postcards were from Dragon Quest by Square Enix and the other two were from Monster Hunter by Capcom. They were totally free and can't be found in anywhere else.

We stayed for a few hours but the time flied. I took another look around before we went home. Have I outgrown this kind of thing? Who knows?

"Naruto Shippuden," published by "Shonen Jump," is popular all over the world and at V-Jump Festa 2011, everyone was talking about "Naruto Shippuden: Ultimate Ninja Storm Generations" for PlayStation 3 and Xbox 360.

Namco Bandai gave us a peek at this booth. The game was released in Japan in February 2012 and in North America the following month.

Below we see Sasuke (in purple) up against the Raikage (shirtless). How did Sasuke do against Naruto moments earlier? Find out here.

Here are a few extra photos

If you could, would you come to V-Jump Festa?