With Halloween just around the corner, the latest book club quest is to write a review of a book that I have found scary. I enjoy reading scary books a lot, especially Stephen King, but the first book that popped into my head when I read the quest was Jurassic Park by Michael Crichton. Although I would class it mainly as a science-fiction/action novel, Jurassic Park is still full of suspense, gore and terror and I would recommend it to anybody.

It tells the story of an eccentric millionaire, John Hammond, who invites several specialists, including a paleontologist, Alan Grant and a mathematician, Ian Malcolm, to visit his brand new theme park, Jurassic Park, where the attractions are real live dinosaurs.

My history with 'Jurassic Park'.

I first received a copy of Jurassic Park when I was about 9 or 10, as a present from my parents. It had recently been made into a movie by Steven Spielberg and, although I hadn't seen it at the time, I had been obsessed with dinosaurs for a few years and the media-hype around the film had intensified this obsession.

The first time I read Jurassic Park, I was far too young to understand many of the references to maths and science, but that didn't stop me from enjoying the story. The plot is fast paced and the characterisation is fantastic; you will end up rooting for some characters and cheering on the dinosaurs in other cases.

Most importantly for me at the time, you have dinosaurs; lots of dinosaurs. From the vicious, man-eating T-Rex and Raptors to the vegetarian Stegosaurus and Apatosaurus, Jurassic Park featured all the dinosaurs I loved so much as a child. Crichton's descriptions of the attacks by the dinosaurs are gripping and often gruesome, and he brings these long extinct creatures back to life with remarkable skill.

The dust-cover of my copy of Jurassic Park (my own photo). 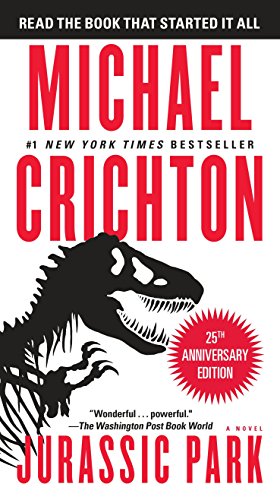 Jurassic Park: A Novel
In 'Jurassic Park', Michael Crichton brings dinosaurs to life with his story of eccentric billionaire John Hammond, who invites experts in several sciences to visit his new theme park, Jurassic Park. Crichton expertly uses science and mathematics, along with a suspense-filled story line, to make the reader consider the possibilities of bio-technology and the potentially catastrophic repercussions of playing God.
Buy Now

Why do I find 'Jurassic Park' scary?

The main reason I find Jurassic Park so scary is the obvious reason; being trapped on an island, surrounded by large, powerful dinosaurs, who will eat any person they come across. Crichton is an exceptional author and really knows how to crank up the tension and suspense during the scenes between the humans and dinosaurs. One of my favourite scenes involves the velociraptors attacking a building containing several of the main characters. The build up to the final attack is artfully written and the description of one of the humans being dispatched by a raptor's claw has stayed fresh in my mind since the first time I read it.

I also find Jurassic Park terrifying from a science point of view. In a world of cloned sheep (think of 'Dolly') and genetically modified food, recreating extinct animals doesn't sound that far-fetched and Crichton makes it sound like a very realistic proposition. Will there come a time when somebody does have the technology to recreate dinosaurs or the dodo etc.? And if they do have the technology, how will they use it? Jurassic Park contains a stark warning for anybody tinkering in genetics, but is it a warning that would be listened to? I think not.

Would You Bring Back Dionsaurs?

Would you bring back dinosaurs if it were possible?

And now for the science bit...

Over the years, I've reread Jurassic Park many times, and as I got older, the maths and science featured in the book became more interesting and understandable.

Both the book and the movie make many references to chaos theory and its applications. Chaos theory is basically the idea that a tiny change in the initial state of a system can cause huge changes later down the line. It is commonly referred to as 'The Butterfly effect', due to the idea of a butterfly flapping its wings on one side of the world causing a hurricane on the other side. In the novel, Dr Ian Malcolm (a mathematician visiting the island) regularly refers back to Chaos theory to explain how the scientists at Jurassic Park have no way of making accurate predictions as to what would happen with the dinosaurs they have created.

Due to the subject of the book, Jurassic Park also talks extensively about paleontology (the study of prehistoric life) and biotechnology and one of the things I love so much about this book is how Crichton makes everything sound so achievable and do-able, maybe not now, but certainly not very far in the future. Bringing dinosaurs back to life is an exciting, although chilling, concept and Crichton really brings it all to life.

Jurassic Park was first made into a movie in 1993, directed by Steven Spielberg and starring Sam Neill, Laura Dern, Richard Attenborough and Jeff Goldblum. This was followed by sequels in 1997 (based on Crichton's book 'The Lost World') and 2001. A further two Jurassic World sequels have been released in recent years.

The first appearance of the dinosaurs in the film 'Jurassic Park'.