Khaled Hosseini is the masterful writer of "The Kite Runner" and "A Thousand Splendid Suns." Born in Afghanistan, the physician-turned-author made it to the New York Times bestseller list with his first novel, "The Kite Runner," which was turned into a full-length movie that is now available on DVD.

Like the characters in his bestselling novel, "The Kite Runner," Khaled Hosseini was born in Kabul, Afghanistan. His father was a diplomat with the Afghan Foreign Ministry and his mother was a teacher.

Hosseini lived in Afghanistan from the time of his birth in 1965 until his father was transferred to Paris in 1976. The Soviet invasion in late 1979 changed his life forever. The family was ready to return to Kabul in 1980, but instead sought and received political asylum in the United States.

Hosseini's family moved to California, where he graduated from high school four years later. After high school, he enrolled at Santa Clara University and received a bachelor's degree in Biology. He then pursued a career in medicine, enrolling in the U.C. San Diego School of Medicine, where he earned his medical degree in 1993.

Hosseini finished his internship and began practicing medicine. He was still working as a doctor when he began writing his first novel, "The Kite Runner," a gripping story of friendship between two boys. The novel was published in 2003 and went on to become an international bestseller that received critical acclaim. Critics called it "haunting" (The New York Times), "extraordinary" (People), and "powerful" (The Washington Post Book World).

In 2006 he was named a goodwill envoy to UNHCR, the United Nations Refugee Agency. His second novel, "A Thousand Splendid Suns," about the lives of two Afghan women, was published in May of 2007.

"The Kite Runner" was turned into a film directed by Marc Forster and starring Khalid Abdalla as the grown-up Amir. The movie was originally scheduled for release in November 2007, but was delayed December 14. It is now available on DVD. The film's dialogue is in Dari (Afghan Persian) with English subtitles, and most of the actors involved with the film, including the child actors, are native speakers.

The Kite Runner DVD - Get your copy of this wonderful movie

The Kite Runner
From Amazon: Like the bestselling book upon which it's based, The Kite Runner will haunt the viewer long after the film is over. A tale of childhood betrayal, innocence and harsh reality, and dreamy memory, The Kite Runner faces good and evil--and the path between them, though often blurry and sorrowfully relative. Director Marc Forster (Monster's Ball, Finding Neverland) presents a painterly vision of Afghanistan before the Soviet tanks, before the Taliban--lush, verdant, fertile--in its landscape and in its people and their history and hopes. The story follows two young boys' friendship, tested beyond endurance, and the haunting of their adult selves by what happened in their youth--and what horrors befall their country in the meantime. The performances of the two boys--Zekeria Ebrahimi (Amir) and Ahmad Khan Mahmidzada (Hassan)--are the film's strongest, unforced and gently evocative. The penance paid by their adult selves is foreshadowed, but never predictable--and the metaphor of innocence lost, a common theme in Forster's work, keeps the film, like the title kites, truly aloft.--A.T. Hurley
Buy Now 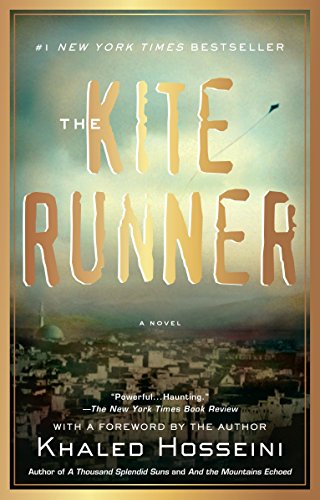 What's your opinion of Khaled Hosseini?

"The Kite Runner" is the story of two boys, Amir and Hassan. Amir, a Pashtun, is haunted by the guilt of betraying his friend Hassan, the son of his father's Hazara servant. The story does a good job illustrating the way the Hazara people have been discriminated against in Afghanistan society.

The Hazara are an ethnic group who reside mainly in the central region of Afghanistan, called Hazarajat or Hazaristan. They are predominantly Shia Muslims and speak the Hazaragi dialect of the Persian language. Because of a lack of accurate census data, as well as a history of centuries of discrimination, estimates of the size of the Hazara population vary greatly and are highly politicized. Estimates range from the most common 9% to higher numbers, but the lack of an accurate census for decades means that there is little verifiable information at present. Significant populations of Hazaras also live in Iran, Pakistan, Scandinavia, Afghanistan, Australia and New Zealand.

The main theory states that the Hazara have Mongolian origins with some Caucasoid admixture, as evidenced by physical attributes and parts of their culture and language. It is commonly believed that the Hazara are descendants of the armies and settlers of Genghis Khan's Mongolians, who marched into the area in the 12th century. Oral traditions among Hazaras claim direct descent from Genghis Khan himself. Studies in genetic genealogy have identified a particular lineage of the Y-chromosome characteristic of people of Mongolian descent ("the Y-chromosome of Genghis Khan").

However, the main Mongolian mixing theory is somewhat contested on the basis of historical events surrounding Genghis Khan's invasion of what today constitutes central Afghanistan.

There are other beliefs holding Hazaras as descendants of the Koshanis, the ancient dwellers of Afghanistan famous for constructing the Buddhas of Bamyan; proponents of this view hold the geography of Hazara homeland and the similarity in the facial features of the Hazaras and those on the frescoes and Buddhas statues in Bamiyan.

The leaders of Hazara lineages, known as mirs or khans, lost their powerful status in communities after Amir Abdur Rahman subdued them in 1891. The Pushtun state established a local administration, imposed harsh taxation policies and distributed lands to Pushtun, including fertile pasture lands in areas previously inaccessible to Pushtun nomads.

The Hazarajat continued to be a neglected area. Services and physical infrastructure were practically nonexistent. Farming and animal husbandry are the principal occupations; there is no industry. Because of their meager resources, the Hazara seasonally sought work and services in other areas as low grade civil servants, shopkeepers, artisans, urban factory workers, and unskilled labour. In the 1960s an estimated 30-50 percent of Hazara males migrated to the cities where they were considered to be on the lowest rung of the social scale. During the 1960s and 70s their economic and political status improved, but they suffered greatly under the Taliban.

To learn more about the Hazara, visit Hazara.net