If you like to read science fiction and paranormal romance or mystery suspense books, have I got a series of books for you.

Welcome to Jayne Castle's world on the planet Harmony where colonists from Earth traveled through an energy curtain that opened in space. Many ordinary (and some not so ordinary Arcane Society) people have settled on Harmony. But, now the curtain allowing interplanetary travel to Earth has closed and the colonists are left, amid ancient alien ruins, to their own devices and talents.

The Harmony books are written by Jayne Ann Krentz under her pseudonym, Jayne Castle. These novels take the Arcane Society to the future.

Who is Jayne Castle?

Jayne Castle aka Jayne Ann Krentz aka Amanda Quick is my new most favorite author. Move over Nora and make room for Jayne! Jayne Castle is the pseudonym that Krentz uses for her futuristic science fiction novels set on the planet Harmony. Some of the Harmony series books are also part of other Arcane Society trilogies.

Welcome to the Planet Harmony

The planet Harmony is a world rich with flora and fauna and psi energy. There is much beauty on the planet, but also danger.

The most outstanding feature on Harmony is the massive Alien ruins which are made of impervious, glowing green crystal. Most of the structures are underground and form a maze of tunnels and catacombs. The Dead City ruins are dangerous to enter because of the energy traps and ghost-like energy fields that can kill a human or at the very least, seriously scramble a human mind. The aliens have been gone for centuries, but the safe guards they left behind still function.

It has been 200 years since the curtain to Earth closed. None of the machines from Earth will work and humans have developed new technology that operates by activating a local stone they call Amber to power electricity and other machines. Some have developed talents to use local amber to manipulate the energy fields in the catacombs as well as other features on the planet. Various Guilds have been formed around these talents. The most famous of which is the powerful Ghost Hunter Guild.

And let us not forget the cute, loyal but sometimes ferocious indigenous Dust Bunnies, who like to pick out special humans to form attachments with. These little walking dust mops have many talents of their own.

In Order of Publication

Bridal Jitters is a novella by Jayne Castle. You get to know the people and society on the planet Harmony and you'll want to read more.

Virginia Burch, a psychic archaeologist, and Sam Gage, a ghost-hunter become business partners with offices in some prime real estate in the Old Quarter of Cadence, above the Dead City. Their relationship and their talents bloom in the catacombs of the Dead City, but Virginia gets bridal jitters about their upcoming marriage of convenience.

These are all set on Harmony and are about one of the "occupations" that colonist with talent perform. The Dust Bunnies abound and help the characters, sometimes preventing disasters.

Lydia Smith, a licensed para-archaeologist, is stuck working at Shrimpton's House of Ancient Horrors. But a new wealthy client may save the day. That is until she finds the dead body in the sarcophagus exhibit. 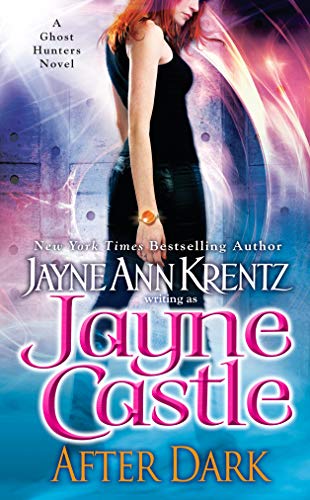 After Dark (Ghost Hunters, Book 1)
This is the book that hooked me on the Harmony books. Krentz (Castle) has created a whole new world and society much like Anne Macaffrey did in her Pern books.
Buy Now

The trials and tribulations of Lydia Smith and Emmett London continue in After Glow. There is big trouble brewing underground and the psychic archaeologist and head of the Ghost Hunters Guild are in the middle of it.

Elly St. Clair, botanist in a small town college, breaks her engagement with local Guild boss, Cooper Boone and leaves academia and her hometown behind. Cooper shows up in the big city where she lives, just in time to help Elly investigate the disappearance of a couple of her new friends in the Alien underground ruins.

Professional matchmaker and strong talent, Celinda Ingram, needs a bodyguard and a date to her sister's wedding. Security specialist (and Ghost Hunter) Davis Oakes fits the bill. After all, he needs to keep an eye out for the suspicious, ancient, ruby red object that Celinda bought as a toy for her dust bunny.

Homeless, retired hunters are disappearing in Crystal City and tabloid reporter, Sierra McIntyre, wants to know why. She and her dust bunny, Elvis, confront the psychically and physically powerful Ghost Hunter Guild boss, John Fontana, in hopes of uncovering the conspiracy. But Fontana surprises everyone when he proposes marriage!

Amber tuner and independent prospector, Lyra Dore, is mad and heart broken. Three months ago, she lost the find of a lifetime (an amethyst ruins in one of the underground rain forests) and her heart to Cruz Sweetwater. Now Cruz, the CEO of Amber Inc. is back and he wants her help. Should Lyra and Vincent, her artistic Dust Bunny, trust him?

During Victorian times, Arcane Society founders, Sylvester Jones and Nicholas Winters each sought a way to enhance their individual psychic talents. Winters created a device called the Burning Lamp. In each generation, one of the male members of the Winter family inherits multiple talents and the curse of madness. On Harmony, notorious crime lord Griffin Winters is sure that he has inherited the Winters curse. He seeks a cure in the form of psychic private investigator and strong dreamlight reader, Marlowe Jones.

The other two books in the trilogy, Fired Up and Burning Lamp, are just as exciting. One takes place in the past and the other is set in present time.

Strong psychic talents, Charlotte Enright and her teen crush, Slade Attridge (with his dust bunny) have returned to the island of Rainshadow. The dark Preserve, a mysterious, privately owned wooded area, beckons to them both. And now a dead body is found in Charlotte's antique shop.

Book 1, In Too Deep takes place in the present while Quick Silver (book 2 of the series) is set in the past during Victorian time. I enjoy how Jayne Ann Krentz uses her pseudonyms, Amanda Quick for the past and Jane Castle for the future to create trilogies which trace the Arcane Society families across a span of hundreds of years.

Rainshadow Island is a beautiful sanctuary where even people who don't fit in the mainstream world can feel safe. Bookstore and cafe owner, Rachel Bonner and her dust bunny have been at peace on the island. That is, until Harry Sebastian, a descendant of the notorious pirate, arrives to investigate strange happenings in the Preserve which his family owns.

The Rainshadow series delves into the ancient beings that built the mysterious ruins. The island preserve holds even more mysteries and power than the cities on the mainland. I especially enjoyed these books.

Who is your favorite Dust Bunny?

You may enjoy the Match Maker Series. Amaryllis is the first of the science fiction, paranormal romance mystery match maker series set on the abandoned Earth colony of St. Helen's featuring women such as Amaryllis, a strong psychic talent, who are looking for their life mate. The trilogy is about Arcane of the future. Book 2 is entitled Orchid and book 3 is entitled Zinnia.