Robert is an author, artist, graphic designer, and photographer. He writes about Survivalism and Futurism.

I rediscovered Haiku in 2009. I started learning about haiku and who the masters of the Japanese art were. One of the first men I came across was Masaoka Shiki. He was a man who loved to write. He wrote so many haiku in his lifetime, I wonder if I will be able to match his accomplishments.

I have looked all over the internet for information about Shiki. There is not a whole lot out there. There are several websites that describe his life. I know there is a movie about his life, but I can't find it anywhere. I don't think anyone has bothered to subtitle it into English. Maybe someone will be able to get a copy for me one day.

Shiki didn't live very long. He died in his thirties from complications with tuberculosis. But he spent much of his last years of life walking the countryside writing hundreds and thousands of haiku. It is inspiring. I hope to be half the poet he ever was.

Masaoka's Parents - Who Raised the Father of Modern Haiku

Masaoka's Father (Masaoka Hyata) was a low ranking Samurai. He was a warrior for the city. He was also know as an alcoholic. He died when Shiki was only five years old.

Masaoka's mother (Yae) was a teacher of the valuable skill of sewing.

Because of his father's death Shiki's Uncle (Ohara Kanzan, who was a Confucian scholar and a "samurai's samurai") became the family guardian. He was the one who inspired Shiki to begin writing, to study poetry.

Masaoka Shiki: His Life and Works 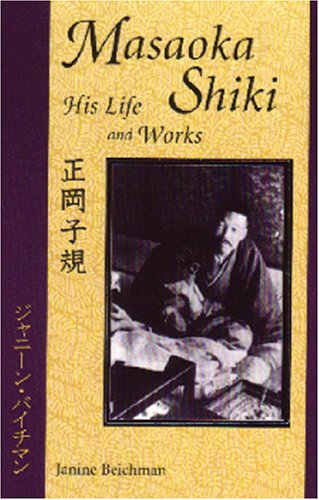 Masaoka Shiki: His Life and Works
This is probably the best book I have on Shiki's Life. Take a moment and read about it on Amazon.
Buy Now

Shiki as a Young Child

Masaoka Shiki was born in Matsuyama in 1867. He first discovered writing and poetry as a child. In the fifth grade he wrote his first Chinese poem (In the black box below). He wrote it about the Japanese Cuckoo, a bird he thought sounded like someone coughing up blood. This was something he would deal with later in his life when he suffered from tuberculosis. He took the Japanese word for Cuckoo (Shiki) as his pen name.

As he grew older he developed his skill with words and with ink, drawing portraits and landscapes containing a poem describing a feeling or emotion on the artwork. It was a beautiful combination of the arts. It is something we are still mimicking today.

Under the moonlight, cuckoo cried as if it coughed up blood.

The sad voice kept me waking up,

the cry reminded me of my old home town far away.

How Many Poems Did Shiki Write?

In 1883 Shiki began his studies at University Preparatory College. He became interested in philosophy, an aspiration that led to the essay called "The Origin and Development of Poetry". After graduating from the preparatory college he entered Tokyo Imperial University where he continued to study poetry. He lost interest in his classes after a while. He was quoted saying "the only studying I did was of haiku and novels." So he began roaming around Japan. I guess you could say that the country of Japan became his university.

The fireworks are over

How dark it has become!

Shiki was a Journalist and Editor

As a Young Man, in 1893, Shiki took on a position as a journalist and editor with the Newspaper "Nippon". He was the Haiku editor and wrote critical essays like "Indiscriminate Attacks on the Literary World" and "Some Remarks on Basho". In 1895 he talked the editors into allowing him to become a War Correspondent in China. He arrived too late and missed the fighting. What did happen was his illness became worse.