The Midnighters Trilogy by Scott Westerfeld

For five teenagers in Bixby, Oklahoma, 12 am is a wonderous time. At the stroke of midnight, the world stops for one magical hour. Cars barreling down the road suddenly halt in their tracks. Rain falling from the sky freezes in midair to sparkle like diamonds. And people cease to move, becoming stiff and hard as mannequins. Everyone becomes frozen in time. Everyone, that is, except the Midnighters.

Rex, Melissa, Dess, Jonathan, and Jessica are special. They are Midnighters, free to move around in the secret hour. But they are not alone...

Out in the desert scrubland and salt flats of Oklahoma, ancient and powerful creatures exist. Nightmarish monsters that crave human flesh.

The monstrous creatures infesting Bixby, Oklahoma are Darklings. They are an ancient evil that is to be greatly feared. Darklings can use their power to transform to become your worst nightmare, or they can use your own doubts and fears against you, willing you to give in and be devoured. They are predators that hunt for weak or stray humans. They cull their prey from the herd and consume them.

10,000 years ago, Darklings were at the top of the food chain. These monsters hunted people freely, at all hours of the night. They feasted upon the flesh of man and slaked their thirst with human fears.

Darklings were stronger, faster, and smarter than mankind and they were able to hunt to their hearts content. Humans lived in constant fear of these dark creatures. Men, women, and children huddled together in groups not knowing when the Darklings would come for them.

Then, something changed. The humans found a way to fend off the Darklings. They discovered that the dark creatures were afraid of new concepts and ideas. Fire became a weapon and the first line of defense against the Darklings. Men and women began to build huge bonfires to keep the creatures from their camps.

As time went on, people discovered metal and steel were also protection from the vile monsters. They forged swords and other defenses. With these tools and weapons they were able to fight back against the Darklings and protect their families.

And they won! Just a few thousand years ago, our ancestors bested the Darklings with fire and steel weapons. They were able to drive the vile monsters back into the deepest darkest forests and bring safety to their people.

Once mankind learned to fight back and gain a foothold on survival, the Darklings were almost driven to extinction. To survive, the ancient creatures created a secret hour. Unbeknownst to most people, there are actually 25 hours in a day. The Darklings found a way to take one of those hours and collapse it into one instant so that normal humans could not see it, leaving 24 hours in real time.

This secret hour is Midnight. The Darklings hide in the Midnight hour in Bixby. During our 24 hour days, the creatures sleep deep underground awaiting the secret hour. Once it arrives, it is their world, and they are free to move and hunt humans as they did in ancient times.

For normal human beings, daylighters, this hour passes in an instant. They are frozen in time and have no idea of the monstrous creatures moving in and around Bixby and the dangers they present. Over the years, the disappearances of a few people go unexplained, but the townspeople see no cause for alarm.

Every night, as the secret hour ends, the Darklings go back into hiding. Real time starts again and everything unfreezes. People go on sleeping, watching TV, or whatever they were doing when the secret hour began. They have no knowledge of being frozen or of anything out of the ordinary happening. For every normal person in the world, it is 12:01 am.

The Darklings may have created the secret hour to hide in, using it to prey on the human race, but there is also hope. People who are born at the stroke of midnight in Bixby are special. They can see the secret hour and do not freeze as normal humans do. They are free to move around in the midnight hour and are equipped with powers to use against the Darklings. These people are known as Midnighters.

Since the first Midnighter was born, this group has been protecting Bixby and the townsfolk within. They used symbols, numbers, and carefully built structures to guard against the ancient evil in the badlands. With each generation, The Midnighters passed on the knowledge of the Darklings to the new recruits in stories and lore.

For many generations, Midnighters protected Bixby against the Darklings. They used their powers and the knowledge of the secret hour to keep the dark creatures at bay. Then, sixty years ago, something terrible happened. All the Midnighters just disappeared. The lore ends and no one knows what happened to them.

Now, a new group of young Midnighters are on there own, trying to learn the lore and read the signs the best they can, to protect the people of Bixby, and to battle the Darklings as well.

Have you read The Midnighters series?

Midnighters is a fun and adventurous Young Adult series. Follow Rex, Melissa, Desdemona, Jonathan, and Jessica as they discover their powers and fight the ancient creatures trying to devour Bixby, Oklahoma. This exciting series will keep you reading long past midnight.

The Secret Hour - Midnighters Book One

Midnighters #1: The Secret Hour (Midnighters)
15 year old Jessica Day has just moved to Bixby, Oklahoma. She discovers that Bixby is a strange town; even the water tastes funny, but Jess has no idea just how strange things are going to get. When midnight comes, Jessica finds herself in a blue and unmoving world. Then Jess comes face to face with a Darkling and discovers that she is in terrible danger. The ancient creatures want her dead. Rex, Melissa, Dess, and Jonathan must quickly teach Jess how to fight these monsters as she strives to discover her power.
Buy Now

Touching Darkness
The Midnighters are struggling to learn the lore of the secret hour, and their powers, to fight off the Darling invasion. Using signs and symbols left behind by the Midnighters who disappeared years before, Rex, Melissa, and the others must try to understand what is happening when daylighters are suddenly stalking them. And this time, Jessica is not the only Midnighter in danger. The team must come together to save one of their own from the Darklings.
Buy Now 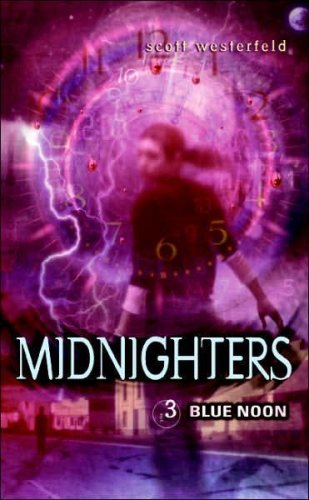 Has this overview of The Midnighters made you want to read the series?

Scott Westerfeld - About The Author

Scott David Westerfeld writes fiction novels for both teens and adults. He writes mostly in the science fiction genre. Some of his works include Yesterday, Peeps, and the Uglies and Midnighters series. His books have been named the New York Times Notable Books of the Year and have also won many awards, including the Aurealis Award. Scott resides in both New York City and Sydney, Australia. You can learn more about Scott on his official website at www.scottwesterfeld.com.

Tell Us What You Think of Midnighters