The Mystery of the Bermuda Triangle

Can you solve the mystery of the Bermuda Triangle?

Because I live in Florida, the story of the Bermuda Triangle has always fascinated me. What's more, every time I've traveled by air or boat in the last twenty years, I've actually been in or over the dreaded triangle where ships and aircraft have been know to disappear for centuries.

I'm writing this to tell you about the most fascinating book I've read about the subject. You'll see the link below.

The first I heard about the triangle was because of the mysterious disappearance of Flight 19. You'll remember that just few months after the end of the Second World War, five military aircraft on a routine training flight disappeared. The aircraft and the fourteen men on board were never seen again. To compound the mystery, an airplane sent up to search for the men also disappeared, plus its crew of thirteen men. A mystery indeed. 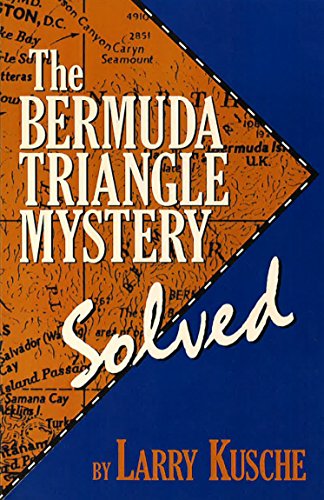 In this remarkable book, Larry Kusche has examined every alleged disappearance or tragedy. Whilst some of these are still unexplained, the author has reasonable theories.

The fun thing about this book is that it's one that you can read and dip into at any time. Some mysteries have two-page explanations that are read quickly, others go into more detail. Very interesting indeed.

The legend of the Bermuda Triangle goes as far back at 1840 when the French ship named the Rosalie was found abandoned. The ship was in fine condition but the crew had mysteriously disappeared.

The only sign of life was - a canary. The cargo that the ship was carrying was still in place and the sails were hoisted.Even more mysteriously there were items on board belonging to woman - few women went on trading ships in those days.

The problem with this story is that it seems the ship never existed. You see, the story of this remarkable disappearing crew was written by a sensationalist writer in the 1930s. It was based on a report he had seen in the London Times (dated 1840) which, it seems, gave erroneous information. The article begins 'A letter from Nassau, in the Bahamas, bearing the date the 27th. August, has the following narrative...'

Even the newspaper, it seems, stressed that this information had come by letter - and the writer's name was not mentioned. Knowing what we do today about newspapers, it seems that this 'narrative' was merely a short filler story for amusement purposes.

Larry Kusche, the author of the book I recommend, has researched this thoroughly (as he has with all the other mysterious happenings) and discovered that there was never a French vessel named Rosalie. There was however, the Rossini which 'struck' in the Bahamian Channel on August 3rd.

Importantly, the record of this - at Lloyds - reads 'Crew and passengers saved.'

How could this incredibly spooky-looking ship disappear without trace? Well, it's because it was in the Bermuda Triangle, isn't that the reason? Not quite.

The Cyclops - for that was its somewhat eerie name - disappeared in 1918. Yes, during the final year of World War One. It was speculated that German submarines had been responsible but post-war records show that there had been no enemy shipping in the area at that time.

Could it have been a mine? That too was discounted because that would have produced wreckage and other debris. The same thing would apply if the ship had exploded for any other reason.

Just to spice up the story even further, although this was an American ship, the captain and many of the crew were in fact of German origin. Just as there were many people who were blaming the curious and 'unnatural forces' that exist in the Bermuda Triangle there were others who were suggesting that the captain had handed the ship and its valuable cargo to the enemy.

In the 1960s, a professional diver claimed that he had seen the ship at the bottom of the ocean - at exactly the location it would have been on its voyage. (The ship, after all, was unusual in design and very recognisable). But why was it lost?

But the mystery remained. It was only when the author of the book above was thoroughly investigating the story that he discovered something that the people speculating hadn't taken into account. On the night the ship disappeared there was a huge storm in the area that caused a massive amount of damage both to ships and on land.

In the frantic scramble to assign this loss too to alien abductions, a giant sea monster or supernatural forces, the people of the time had neglected to blame the storm. There was no official investigation because of wartime.

The best place to read this book

I won't give more away about this book because I'm sure that you'd rather discover the stories for yourself. But now I have a copy, I'm definitely going to play a game next time I have to fly from Miami or Fort Lauderdale airport.

I shall sit reading it in the departure lounge with the cover prominently displayed. Every now and again, I'll shake my head and murmur 'dear me' or 'my goodness ' or even 'wow'.

Then I shall do the same on the plane as we're sitting on the runway. 'Good heavens' or 'well, I've never heard of anything like that' or 'this is just incredible'.

Hehe, I'll be the only person on the plane who isn't expecting an alien abduction.