The Story of Miss Garnet's Angel by Salley Vickers

Do you have guardian angel? Miss Garnet does! In Miss Garnet's Angel Salley Vickers tells the story of a spinsterish older woman who takes an apartment in the Campo dell Angelo Raphaele in Venice and here she discovers the story of Tobias and the Angel, rediscovers the beauty and pleasure of life and finds her very own guardian angel along the way.

This charming book weaves together the apocryphal tale of Tobias with his guardian angel, Raphael, and the story of Miss Garnet's adventures in the magical setting of the city of Venice.

This is the story of Miss Garnet and Her Guardian Angel - I hope you enjoy it as much as I did. 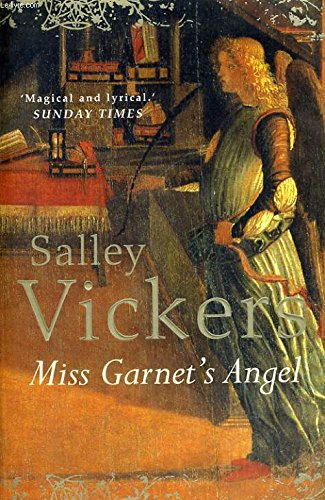 Miss Garnet's Angel
Published by HarperCollins in 2000, this bestselling book has sold over a million copies and has done it largely by word of mouth! Perhaps this is one of the best recommendations - real people like it without the prizes, the advertising and the hype. The cover shows the painting, 'Storie di S Orsola: Sogno di S Orsula' by Vittore Carpaccio (1460 - c. 1526) now in the Accademia Venezia. The book opens with a map of Venice showing Miss Garnet's Apartment, the church of Angelo, Raffaele and 13 other points mentioned in the book.
Buy Now

A spinster from Ealing, London, moves to Venice

Miss Garnet is a retired school teacher living in Ealing, a leafy suburb of London (where I also used to teach!), when her friend dies unexpectedly. This upsets Miss Garnet's retirement plans and so she lets out her accommodation in Ealing, and rents a flat in Venice.

This is the gentle story of the hopes and fears of Miss Julia Garnet, the friends she makes, the life she creates and the angels that she finds on the streets of this most magical and beautiful Italian cities. But into this story there is a second story. A very ancient story that takes place in a very different setting. This is the story of Tobias and his guardian angel, Raphael.

Image courtesy of Creative commons. Venice by Oliver-Bonjoch This file is licensed under the Creative Commons Attribution-Share Alike 3.0 Unported license.

The Story of Tobias and the Angel

A tale within a tale

Throughout the story of Miss Garnet, runs another story, the two tales running alongside each other, but they are also woven together to provide a rich and thoughtful whole.

The story of Tobias and the Angel comes from the book of Tobit from the biblical apocrypha. In the author's note at the end of the book, Salley Vickers tells us a bit about the origins of the story.

The Book of Tobit has been a part of Jewish literature for more than 2000 years.It is set in the time of the first Jewish holocaust when, in 722 BCE, the 10 lost tribes of Israel were sent to Assyria. It wasn't written down until much later and some scholars think it may have derived from later exiles: the exile from Judah to Babylon or from the Jewish Diaspora in Egypt.

The story is set in Nineveh during the Assyrian Empire but most of the action takes place in Media. Experts have linked features of the story to Zoroastrianism and this might explain the positive role played by the dog in the story. The city of Raghers mentioned in the book was also known as 'Zoroaster's City'. In Magian ritual the dog was used to exorcise the 'corpse spirit' and to help guide the soul across the 'Bridge of Separation'. The role of the dog might have been linked to the evil spirit, Asmodaeus, who had posessed the girl who would later marry Tobias. The demon Asmodaeus probably originate from the Aesma daeva arch demon of Zoroastrian demonology.

The Angel Raphael challenges Asmodaeus and Raphael's counterpart is Sraosh who fights Aesma. Sraosha is associated with a dog. So is the story of Tobias really an old magi tale?

Image: Tobias and the Angel by Andrea del Verrocchio

Campo dell'Angelo Raphaele in Venice - This is where the story starts

The map at the start of the book shows Venice and lists 15 key sites which Salley Vickers mentions in the book/ Miss Garnet's Angel has become an alternative guide book and apparently, tourists are to be found, book in hand, searching out some of the landmarks mentioned in the book.

Where fiction and reality meet

Miss Garnet will take you on the most wonderful tour of Venice and the places she visits are wound around and into the story of Miss Garnet's Angel.

Visit Ponte de Cristo where Julia Garnet first met Nicco and where she realises the shocking truth about Carlo. The bridge has symbolic worth too. In the ancient Zoroastrian religion, the Bridge of Separation was the link between life and death. The dog in the story, was, in Zoroastrian teaching, a sacred healing animal. The dog can be seen at the heels of the Archangel Raphael in the story of Tobias.

The Chiesa dell'Anzolo Raffaele is at the heart of the story. it is situated just across from Miss Garnet's apartment,

The Chapel of the Plague

The one fictional place in Miss Garnet's Venice

No good looking for this one - Sally Vickers made it up.

Tobias and the Angel by Botticini

This painting by Botticini shows three archangels, Raphael, Michael and one other, but Julia Garnet discovered that there were seven archangels. Who were the other four?

Life is never simple is it? Angels are not very straightforward. The seven angels vary from faith to faith. The Catholic Church mentions only Gabriel, Michael and Raphael.

In Anglican and Episcopal tradition, there are three or four archangels - Gabriel, Michael, Raphael and often, Uriel. (September 29 feast for St. Michael and All Angels -also called Michaelmas)

Salley Vicker's latest book, 'The Cleaner of Chartres' has been very warmly received - I can't wait to read it.

The Cleaner of Chartres: A Novel
Agns Morel lived a quiet existance in the small town of Chartres, France. She appeared from nowhere one morning but her past was not a simple one.
Buy Now

Where Did I Find My Information? - Links to my sources

Do You Have Any Thoughts on Miss Garnet's Angel? - Let me know what you think of it