Sold Over One Million Copies in Victorian Britain

Mother's Last Words is a very touching story that will bring a tear to many eyes; and with being 16 pages long is well worth the read.

The story starts with a mother on her deathbed, in a basement flat in Victorian London, who speaks her dying words to her two mournful young sons in threadbare clothes.

She tells them they will soon be alone in the world and that they must do the best they can, but that they'll have to leave the flat as the rent isn't paid.

The rest of the story is about how the two brothers struggle to survive as they try to resist the temptation to thieve and pick-pocket; and rely instead on good health, honest hard labour sweeping the streets, and the charitable kindness of others.

Mary Sewell was born into the Quaker faith in Sutton, Suffolk, England in 1797. She was a member of the Anti-Slavery Association and in 1819 she married Isaac in Lamas, Norfolk. Their daughter, Anna Sewell, was born a year later in Great Yarmouth.

From her birth until after the birth of their daughter, Mary had always lived in Southeast England, and then the family moved to South West England where between 1858 and 1864 they lived at the Blue Lodge, Wick, near Bristol. It’s from Wick where Mary published her main works including 'Our Father's Care', 'Thy Poor Brother' and 'Mother's Last Words' which sold over one million copies.

Mary Sewell was the mother of Anna Sewell, the author who published the famous 'Black Beauty' novel in 1877.

Anna was born in 1820 in Great Yarmouth, Norfolk, England into a devout Quaker family. She was educated mostly at home, only going to school for the first time at the age of 12 when her family moved to Stoke Newington, Hackney, London.

Two years later, at the age of 14, she slipped while walking home from school and injured her ankle; causing her to be disabled for the rest of her life. From that point on she was very reliant on horse drawn carriages, from which she developed a close love with horses; which no doubt gave her the inspiration for her world famous novel, black beauty.

Anna wrote her world famous novel between 1871 and 1877, when her health was declining and she was confined to bed, often dictating to her mother because of her ill health writing was challenging. She lived for just five months after its publication, just long enough to see its initial success; dying in 1878 from TB or a similar illness.

Anna Sewell was buried at a Quaker burial ground near Buxton, Norfolk, England on the 30th April 1878. 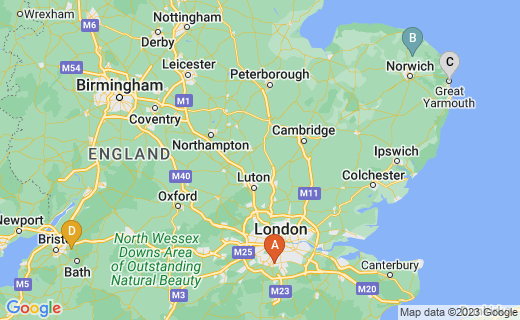 The birth place of Mary Sewell

Where Mary and Isaac Sewell were married in 1819

Where their daughter, Anna Sewell (the famous author of Black Beauty) was born.

Where the Sewell family lived between 1858 and 1864, and from where Mary wrote her famous works, including 'Mother's Last Words'.

Mary wrote her stories from Wick, an idyllic village just outside Bristol, but it would have been from the streets of the towns and cities like London, Norwich, Great Yarmouth and Bristol, near to where she lived and frequented throughout her life, that she would have witnessed early Victorian life on the streets; and which undoubtedly inspired her to write such a touching story like ‘Mother’s Last Words’.

In the early period of Victorian Britain there was little in the way of Legislation protecting the rights of children and no government funding.

When both parents died and children became orphans, if there was not family to take them in and care for them, they were at the mercy of charity run orphanages, schools or similar institutions. Those not fortunate enough to find help from charitable organisations either ended up in prisons, poorhouses, workhouses or a life on the streets.

On the streets, orphans would have to look for menial tasks, such as road sweeping, beg, or turn to crime to survive. Statistically, during the Victorian era, about 60% of criminals were orphans who ended up on the streets.

The charitable organisations were all too often underfunded and unregulated; so all too often the conditions were harsh, and the children undernourished; with diseases, abuse and neglect being common. Albeit, many in the institutions were taught trades which would help them find an occupation when they left at the age of 17.

In this respect, the world famous film ‘Oliver’ is a good portrayal of life for orphans in Victorian Britain.

The first known orphanage in Britain was the Founding Hospital in 1741, but even by the mid-19th century there were few orphanages; one of the early, most famous ones, being the Ashley Down orphanage in Bristol in 1836, set up by George Muller.

When George Muller and his wife set up their first orphanage home in Bristol for 30 girls there was only accommodation for 3,600 orphans across the whole of England.

Between 1849 and 1870 Muller went on to build five orphanages in Bristol, which looked after 2050 children at any one time. From the time they were first opened until these buildings were sold to Bristol City Council in 1958 these orphanages had cared for 17,000 children.

George Muller and his wife were devout evangelists who were passionate in their work to care for the homeless children. The couple did not believe in fund raising, they relied 100% on the generosity of donations; and as such always had the funds they needed and never went into debt. Also, to his credit, he would not automatically accept charity, the most famous incident being in 1853, when he tried to talk a widow out of donating the proceeds from selling her home when her husband died.

With the generous donations they received the couple managed to do their best to look after the children’s health, feed them, clothe them and give them a reasonable education. Although falling short of today’s standards, the care the couple gave the orphans was exemplary for the times.

The Legacy of George Müller

George Burgess (1829-1905) was a prolific writer who loved reading, he bought one of the original copies, which has been passed down the family through the generations along with his own hand-written transcript of the story; showing how much he loved to read and write. This copy has now been published to the web and can be freely read from the link below.

Happy Reading, and don’t forget to come back to leave a note in the guest book to let other people know what you thought of this touching story, ‘Mother’s Last Words’.

Did You Find Mother's Last Words a Touching Story?

Whether you've read 'Mother's Last Words' before or whether you've just read it as a result of this article, let others know what you thought.

Have you read Mothers Last Words, and if so did you enjoy the story?

Your Comments on Victorian Literature