Cheese Problems Solved. Yes, that's a real book, with a real odd title. Who even knew that cheese had problems? From grass to my stomach, where does cheese get the chance to love and lose, raise troublesome teenagers, fret over the mortgage?

Thanks for dropping by this page on odd book titles. You've put down your copy of Applications of High-Level Squids or Elks Do Not Speak English so let's have a look at a few of the funniest book titles around ...

Cheese seems to have inspired quite a few authors. Who Moved My Cheese? has 1,600 customer reviews on Amazon.com! You may not be surprised to hear that Nobody Moved Your Cheese is available from another author,

Then there's Who Stole My Cheese?!!. As you can guess from the exclamation marks in the title, this one is a waste of paper.

Up the standard a bit with Who Cut The Cheese?, a nicely done parody of the original Cheesy work.

Having made a killing with Who Moved My Cheese, the original authors kept up the theme with this effort for teens (see image right). They were a lot less successful - as any parent knows, teenagers don't eat cheese unless it's in a Big Mac. A better book would have been who jogged the focus - that's a terrible photo!

I was musing about cashing in myself and perhaps trying something on the cheese/generation theme. Alas, too late. They've beaten me to it with Who Moved My Cheese? for Kids. Damn, that just about leaves Cheese And The Ultrasound for me, or perhaps Cheese: As An Aphrodisiac?

At The Bottom Of Odd Book Titles

Let's move on to Whose Bottom Is This? I'd prefer it to be a collection of rear shots of Jessica Alba but it's actually one of a series of well-recommended children's books. Then we have Georgia Bottoms and even Ma Rainey's Black Bottom. Makes you think twice about Rock Bottom by Erin Brockovich..

Sticking with bottoms, so to speak, we have Once Upon A Knee but i'm not Eton-educated so my tastes lie elsewhere. I might try The Happy Bottom Riding Club.

A late entry to the list, thanks to World Book Day:Do Bugs Have Bottoms?

Having eaten all that cheese you probably need to work off a few calories. Try the sport of worm hunting: described in Afterthoughts Of A Worm Hunter. Afterthoughts? Like what - that one put up a good fight? If you like stationary targets, try Air Rifle Hunting or the more practical Good Loo Hunting. You could always go >strong>Deer Hunting With Jesus.

Let's be a little less violent: Collecting Native America 1870 - 1960 - what, all of it? And I do wonder if the search for a niche can go too far: Record Collecting For Girls. Is there an opportunity there to write "Gender Determination Of CDs"? Shouldn't girls be occupying themselves with The Original Road Kill Cookbook?

Ducks head to avoid righteous missiles. Throws in clumsy segue to Enslaved By Ducks or even Duck, Death And Tulip.

Talking about ducking death, how about People Who Don't Know They're Dead or the slightly presumptuous Life After Death: The Book of Answers

This is getting too deep -- let's just whizz through a few more odd and funny book titles:

One that's not very odd, I suppose, if you're in that trade: "The 2009 World Forecasts of Trunks, Suitcases, Vanity Cases, Executive Cases, Briefcases, and School Satchels with Outer Surfaces of Leather, Composition Leather, or Patent Leather Export Supplies" - years out of date and they''re asking $325! Odd prices indeed.

And A Dangerous One

An odd title to beware of

Bondage For Beginners: how disconcerted would you be if she whipped this out at a crucial moment? Not recommended for a Valentine's gift.

I'm off to write Somebody Moved My Chains: thanks for reading and please leave a comment - especially if you can recommend any more daft book titles. 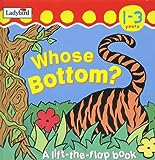 Lift The Flap Whose Bottom Is This (I'm learning about) by Ladybird (2000-08-29)
One of Wayne Lynch's excellent series: this uses a quiz format with lots of photographs to help teach 4-7 year olds about more exotic animals.
Buy Now

Whose Bottom And Other Body Parts

The book above was suggested by the parents of two small, sniggering boys. Great fun for young children, Whose nose, feet, knees - all sorts of ways of looking at animals and learning fun facts.

The book below is perhaps parents' revenge: one that the kids will never read but they'll wonder why the wrinklies are making funny noises. 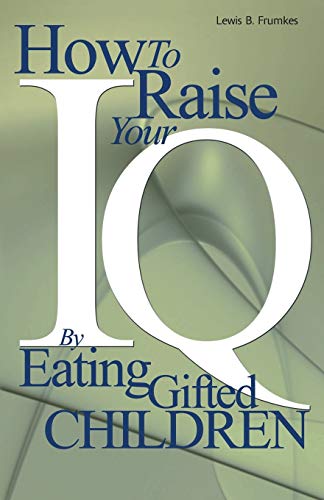 How to Raise Your I.Q. by Eating Gifted Children
Lewis Burkes Frumkes looks at (and dissects) the foolish fads and fears of modern-day urban Americans. I'd recommend this to anyone who orders coffee that has more than 34 syllables in its name.
Buy Now

Cooking with Pooh sounds a bit silly but would you buy a grown-up cookbook called "Cooking With Poo" - that's the book that's just won the 2102 Diagram award.. Poo is apparently Thai for "crab" and is also author Saiyuud Diwong 's nickname. That doesn't actually make it any better, Saiyuud.

See the full Diagram Prize shortlist - my choice would have been The Great Singapore Penis Panic - probably when they saw the crabs.