Pet Sematary is a very frightening and engaging book. Stephen King uses the natural desire to keep loved ones alive to create a tale that is both creepy and heart-breaking. This is one of Stephen King's best books. 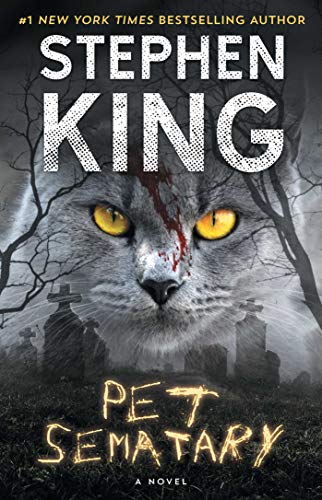 Possible Spoilers, though I don't reveal anything in detail

Pet Sematary is a story of learning to accept death as a part of life. The children have to learn to accept the death of their pets, and the book carries three generations through tragic loss of loved ones, showing how each generation handles the fact of death. The Micmac burial ground allows the children's pets to have a second chance at life. The Pet Sematary serves as a symbol of the children's eventual acceptance of death, as that is where their pets are buried the second time.

Death is the ultimate separation. People can leave you in life, but when someone dies you know they're never coming back. Ironically, in Pet Sematary, the desire to avoid death ends up causing separation. When people are resurrected in the book, they have an almost supernatural knowledge of others' secrets and use this knowledge to drive wedges between people, blowing apart relationships. At the end of the novel the protagonist is playing Solitaire. The man who would do anything to keep his family together ends up alone, and the person who learns to accept death as a part of life is safe in the arms of family.

The Micmac burial ground can be seen as the manifestation of obsession with a deceased loved one. When someone you care about dies, it's natural to remember them and focus on the life they had. But if you focus too much on the deceased it can seem like they are haunting you. You can start to hear their voice in your head as the memories keep circulating, if you lived with them you might still feel them around the house. And if you have to go through their stuff, dirty secrets might be revealed. Like in Pet Sematary, if you obsess too much over the dead, it will drive you away from the living.

What are your thoughts about escaping death?

Would you bring a deceased loved one back to life if you could?

Rate it, if you dare... - If you've already read Pet Sematary, rate it here.

How Unrealistic is Pet Sematary?

Of course there's no way people can raise the dead, but there have been many advancements in cloning. Cloning a pet is becoming more and more common. It's still prohibitively expensive for most people; but, like with all other technology, the more popular it becomes the cheaper it will get. It won't be long before we are able to fully clone a human being. (In fact the technology would be the same, but the risk is too high because there are far more deformed embryos than healthy embryos when cloning is concerned). My high school biology teacher once said you can't clone a soul. Whether you believe in a soul or not, a cloned human would be psychologically unprecedented. Would they feel less than human? Would they become psychopaths who resented not being "natural"? The only thing that we know for sure is that, whether a dog or a human, a clone will have a different personality than the original copy (and there's no guarantee that the original and the clone will look exactly the same, either). Memories cannot be cloned, and a great deal of a person's (or other animal's) personality comes from their past experiences.

What are your thoughts about cloning?

Are you for cloning or against cloning?

What are your thoughts about Pet Sematary?