Human Rights Poem: What do You Wear to Get Arrested?

In Many Countries Political Dissenters Are Treated With Excessive Force

Political Idealists and Dissenters, doing no more than exercising freedom of speech for their rights, are treated very violently in many countries. What is particularly worrying is that these are not third world countries - they consider themselves to have an advanced and sophisticated level of civilization.

But what does civilization mean? It's not just about art and culture, it's about people's attitude to Human Rights and the Rule of Law.

It comes from an Iranian video about her death which went viral, and, whilst it might be subject to copyright in Iran, author and original uploader are unknown, and my use of the picture constitutes "fair use" to illustrate the subject of this web page

Neda was killed in Iran in 2009 during the student protests about vote rigging, rounded up and shot, even though she was only a bystander and not actually participating. Her death was caught on video by a very brave photographer and this iconic image was shown around the world within hours, although quickly suppressed in her own country. Regrettably, since then state abuse of human rights seems to have escalated right round the world, and there is a list as long as your arm of countries which give scant regard to the security and rights of their own citizens.

This Web Page is a Snapshot in Time, written on 1st February 2011

I wrote it before the Arab Spring

had really taken hold, and

the poem itself 3 years earlier.

I have thought about updating it,

but that would take away from some of the

after all, you know what happened next!

My Poem: What Do You Wear To Get Arrested?

A number of lawyers were arrested in Lahore in 2007 when they joined in a protest against illegal vote-rigging during the Indian elections.

This Is The Picture Which Set Me Writing The Poem Below

My Poem: "What Do You Wear To Get Arrested?"

Aung San Suu Kyi of Myanmar (Burma) was awarded the Nobel Peace Prize for 1991 for her non-violent struggle for democracy and human rights. Her struggle was considered to be one of the most extraordinary examples of civil courage in Asia in recent decades. She became an important symbol in the struggle against oppression.

I know I said this web page was just a snapshot in time as at 1st February 2011, but I can't resist writing about what I saw on television on 27th March 2013:

Aung San Suu Kyi was sitting next to the generals on Burma Armed Forces Day, reviewing the troops who helped to keep her under house arrest for 13 years. Since she is in power by popular vote, the generals have realized how helpful it is to have her on board to improve their relations and liaise with America. But I do wonder what she was thinking, as she looked on, She must have had very mixed feelings.

Now, in 2017 and 2018, she has been completely discredited because of the horrific massacres and ethnic cleansing in Myanmar.

How have the mighty fallen.

A while ago I saw a BBC News interview of the author, Sahar Delijani, and she is clearly a rising star, praised by many, including Khaled Husseini (author of The Kite Runner and A Thousand Splendid Suns) with the book rising quickly in popularity. Her grandfather was arrested in Iran during the 1980s and executed, and her family are now exiles in Canada. She writes poetry in Pharsee (the Iranian language), but prose in English, as she left Iran when she was 12.

You will see from the synopsis below that Sahar writes from her own heartbreaking experience, and pours everything into her novel. 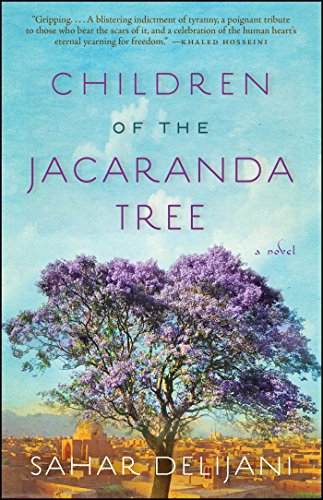 Children of the Jacaranda Tree: A Novel
A story about three generations of a family in revolutionary Iran, and the horror they experience when a loved one is arrested in front of them, then taken away and executed - How it affects them at the time and in their thoughts about their insecure future in a country still riven by dissent and conflicting ideals. If you care about human rights, you will certainly want to read this book
Buy Now

1st February 2011 - As I write this, today is the demonstration when

Egyptians hope to have a million people marching.

Their communications have been shut down

Let us hope there will be no more deaths!

Apart from all the other horrors and killings

have just been sentenced to death

by the ruling military party -

Fine words which meant nothing

When the chips were down

Egyptian Citizens Have Risen Up in Protest

They want Democracy, and they want it now!

For three decades there has been military rule led by President Mubarak. People are angry because his government have failed to deal with unemployment and there has been financial mismanagement. The Western powers have supported him as an ally, in spite of the fact that there has been no proper Rule of Law, and many dissenters have been tortured in Egyptian prisons. The people have no say, and have had to stay quiet for fear of the consequences.

No-one knows what the knock-on effect of this revolution will be round the world but, one thing is clear - things will never be the same again there, and the rest of the Middle East will feel the effects. We all hope for a peaceful transition.

Please stop for a moment and think of the brave young protesters who lost their lives. And in our hearts, thank them for standing up for justice and human rights.

-Tens of Thousands turned out for the March in Cairo.

The military is positively supporting the protesters, and marshalling the peaceful protest.

Sadly, the death toll is approximately 300 over the past week.

In Jordan King Abdullah has just sacked his entire Government, due to protests this week.

In Russia 500 anti-government protesters have just been arrested.

UPDATE 19 SEPTEMBER 2015: Things have moved on considerably since then, haven't they?

2018: A FURTHER UPDATE IS SUPERFLUOUS, SADLY

Here's A Chilling Thought - How Do We Value Our Freedoms?

And yet British democracy has been the envy of the world - we have:

Well, things have moved on significantly since I first wrote this in 2011.

The whole world seems to be in turmoil and we are having to fight hard to ensure that our rights are not eroded. Some will consider that we haven't quite got there, but we are trying - very trying.

So What Went Wrong?

And what about Syria?

I should write about the abuses in Syria too - I haven't forgotten, but that is a subject for another day.

I have, however, written about chemical warfare, and how these poisonous chemicals work:

Links to more articles about political prisoners - this time as at August 2014, not 2011 when I started this page - History repeats itself alarmingly

Thankfully I haven't yet lost my ability to be shocked