Push, a novel by Sapphire, is a moving tale of a teenage girl named Claireece Precious Jones growing up in Harlem, New York. Precious, the name the title character goes by, is dealt a rough life, and Sapphire uses a moral/philosophical approach in her literature. The word push is used throughout the novel to help push the theme and plot at the reader. In the novel, Precious has to push through many inner and outer demons to survive.

“…go with is and push, Preshecita. Push.” The first encounter of the word push, in a significant way is in this sentence. The quote is referring to when Precious is delivering her first child, Mongo. In the novel Precious is on her kitchen floor after her mom was beating and kicking her while she was in labor. At this scene, a Spanish man is coaching and assisting Precious. The significance of the word push is to help Precious through more than just labor pains, but to push through the pain of bringing her father’s child into the world . Push through this, keep pushing, because Precious can push through anything.

“Push, Precious, you gonna hafta push.” Another sentence in which the word push is notably used. When Precious is dreaming the day before she starts in the alternative program, Each One Teach One, she is riding an elevator up to her new destiny, and the Spanish paramedic is back. With his hand one her forehead he is telling her to push again. In this instance, Precious is pushing ahead, she is taking the first steps to the rest of her life. Precious is pushing through the demons that held her back in public schooling and at home, and coming out on the other side. Push through this, keep pushing, because Precious can push through anything.

“…but you can’t stop now, Precious, you gotta push.” One more time Sapphire uses the word push meaningfully. At this point in the story, Precious has realized she was given HIV when her father was raping her. An assignment her teacher, Blue Rain, has her do everyday is to write in a journal. When Precious is wanting to give up, and refuses to write, Rain tells her to push. Here is an emotionally charged section, when Precious actually feels her demons trying to take over. Precious understands how hard her demons are trying to be set free, and pushes through the tough times to continue her education, and continue raising her child, Abdul. Push through this, keep pushing, because Precious can push through anything.

In the end, Sapphire illustrates the theme of her novel by just it’s title, Push. She uses her moral/philosophical approach to help Precious fight inner and outer demons on a daily basis, and with one simple but complex word pushes Precious. A wonderful message is taken from this novel, the message that anyone can survive, they just have to believe. When they believe they can they push, push through anything. 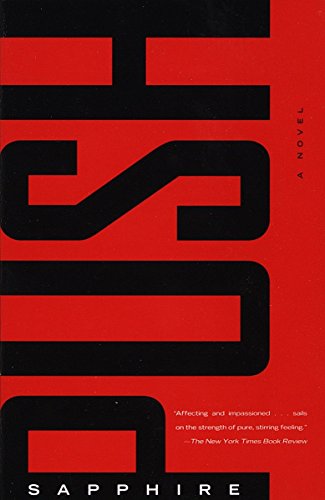