Richard Scarry was the talented writer and illustrator of at least 300 books. Worldwide sales of over 300 million copies.

I have searched the Internet and compiled, in chronological order, the major events in Richard Scarry's life. Some websites contradict each other, and some are direct cut-and-paste plagiarized versions of each others' websites!

But I have tried to narrow down the information that makes sense and is validated by several sources. Keep in mind that this may not all be accurate, but I tried to form a timeline that will hopefully paint a partial picture of Richard Scarry's life.

(Date): At his father's urging, he attended but dropped out of business school - he didn't like it.

(Date?): Moved to New York and began work as a freelance illustrator.

1942-1946: Drafted and served in the U.S. Army as an art director, editor, and writer of information publications in North Africa and Italy.

1945: Worked for art department of Vogue Magazine/Conde Nast Publication for two weeks, but was fired with no explanation except that he wasn't "right" for the position. (their loss)

1948: Married Patricia ("Patsy") Murphy, a writer of children's textbooks. Some sources say they met at a cocktail party, some say it was during a collaborative work project. (care to place bets?)

1959: Moved with his family from Ridgefield, CT to Westport.

1972: Purchased chalet/studio in Gstaad. Worked on writing and illustrating from 8 am to 4 pm, telling his wife only to interrupt him for lunch.

Over the next few years he traveled with his wife in Africa and the Far East.

1973: Richard Scarry's Please and Thank You Book is published.

1976: Receives some hate mail and is accused of racism and sexism presence in his books - Random House alters and reissues some book editions. New York Times: Richard Scarry's People Human and Sexist Pigs (the term "Political Correctness" has not yet been coined)

1985: Finished drawings for the Biggest Word Book Ever

April 30, 1994: Richard Scarry died in Gstaad, Switzerland at age 74. He had Cancer of the Esophagus which probably led to his fatal heart attack. Richard Scarry's New York Times Obituary. His wife Patsy died in 1995.

Richard Scarry was a fairly private person, so he didn't give many interviews, but here are the biographies I could find. 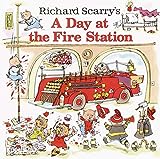 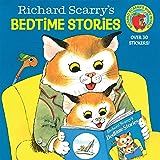 Cars and Trucks and Things That Go
Buy Now

One of my favorite things about Richard Scarry is the way he illustrated books for children. Sure, the parents love them too, but if you look closely, he put all the little extras in his books that make them a secret world between the book and the child's imagination.

Looking at one of his learning and yet comic type books like Cars and Trucks and Things That Go, you can search each page for Goldbug ... a fun and friendly little bug character who could be anywhere, doing anything.

In a more 'seriously' illustrated book by Scarry, like the classic Golden book The Gingerbread Man, you can notice the little cat licking his lips below the table, hoping to get to eat the Gingerbread Man himself! Closer inspection of the drawings show all kinds of insects - ladybugs, grasshoppers, ants. All those little things weren't necessary to the illustrations. But they ARE there, and they're what make his illustrations truly special and fun. 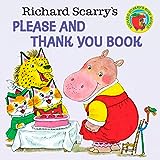 Suggestions, corrections, altercations? I would love to hear from you.