One of my favorite (or least favorite, depending on how you read it) quotes of all time regarding evolution comes from evangelical Christians who refuse to allow the utterly logical explanation science offers to actually enter into their brains:

And they say all this just evolved!

This process of thinking has always made me cringe just a little bit, and I have to bite my tongue so hard it almost bleeds in order not to become confrontational. In that regard, I show a great deal more restraint than one Mr. Richard Dawkins, who shows very little patience in tearing apart fairy tails and explaining exactly how everything just evolved. We don't have all of the answers to everything, but we have an extremely plausible structure from start to finish that makes total, complete sense. Here is is, in a nutshell.

Richard Dawkins on the lecture circuit

Quick author's note: I am not picking on Christians, by any stretch, but here in the US, they are by far the most prominent religious group, and with a majority of Congress (and every President we've ever had, bar none) claiming some form of Christian faith, it is quite obvious that the political implications of this belief are far-reaching. Not all Christians are so-called "young earthers" - in fact, the number is comparatively very small - but the extremely evangelical types often get a pass with ill informed ideas, allowing them to spread rapidly into classrooms, where such ludicrous ideas most assuredly do not belong, but they are nevertheless taught alongside evolution as "another equally viable theory."

Evolution is just a theory!

It is. So is gravity, but we aren't so willing to climb to the top of the Empire State building and jump off in order to test this theory. Why are people sometimes willing to scoff at evolution? The answer is simple: it's because they don't understand where the theory comes from.

Things don't just evolve. There are slow permutations taking place over billions of years, and have been ever since the first RNA molecule was assembled on earth nearly 3 billion years ago. While RNA was capable of reproducing and ultimately what got us to where we are today, there were also countless other molecule combinations being crammed together in a very, very ripe early earth environment that was utterly different than the lush planet we know today.

And that's exactly how evolution works: millions (and perhaps billions) of permutations on a gene will happen because the gene isn't exactly copied, or because of some kind of cosmic ray hitting the DNA molecule itself during reproduction, or random chance. 99.999% of those mutations are either utterly benign, or they're harmful, and the ensuing organism has either an equal or greater chance of dying before being able to reproduce.

However, that occasional chance mutation that allows an animal (or plant, or bacterium) to survive just a little bit longer is just a little bit more likely to be passed along to its "children" (I use quotation marks because when I write this, I'm thinking about animals, but this concept applies much more broadly to all species). If that organism then passes its DNA on down to the next generation, and so on, then the species diverges from the predecessor, and natural selection has taken place. 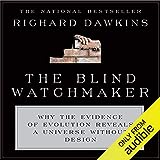 The Blind Watchmaker: Why the Evidence of Evolution Reveals a Universe Without Design
Buy Now

Ah, Richard Dawkins. You may know him as that unbelievably confrontational English dude on youtube who really, REALLY wants you to know that there is no god. But Dawkins is not only one of the world's preeminent biologists, with a dozen honorary doctorates, and critical work refocusing the scientific lens on the gene-centered view of evolution. The Blind Watchmaker even received the "Royal Society Award", along with various other awards.

What makes "Watchmaker" so notable, though, is that it is so very approachable. I graduated from college in 1999 with a degree in art (painting and printmaking) and, although I've been interested in physics since about 2008, I'd certainly consider myself to be very much a "layman" in terms of my scientific knowledge. Dawkins does an amazing job of making evolution incredibly interesting, and I'm not ashamed to admit that he even got me interested in biology, a subject I avoided like a nonbiological plague ever since high school (seriously, biology always seemed so complicated). The evolutionary development of various electric eels really got me thinking, especially since they evolved independently on two separate continents.

Dawkins also got to work with very early computer simulations of evolution, which is another subject that really interests me. During the 80s, he got to play with a "biomorph" that mimicked biological evolution. The coup de grace of the book, though, is how very convincingly he talks about the very origins of evolutionary life on earth, and how the whole process was, essentially, inevitable, and it (evolution) has been going on for far longer than life itself. Very cool stuff to read (or listen to, in my case).

Remember the following quick bullet points, and you'll have an excellent explanation handy for how evolution works:

Conversations can be heated, but always remember to keep things civil. Don't "Dawkins out" on your friends and coworkers just because they don't see things necessarily the same way you do; instead, seek first to understand their point of view, present yours intelligently, and then withdraw from the conversation if you can't convince them of your point. Happy debating!