The Cement Garden by Ian McEwan

The Cement Garden - a novel by Ian McEwan

The Cement Garden is a novel written by award-winning British author, Ian McEwan. It was originally published in 1978.

The Cement Garden is a dark tale of childhood and lost innocence.

The plot of The Cement Garden centres around a group of four children, Tom, Sue, Jack and Julie aged between 6 and 16.

Their father dies of a heart attack whilst laying a cement path in the family's garden and soon afterwards, their mother becomes ill. Fearing that she may have to go into hospital, she encourages 16 year old Julie to look after the other children, run the household and deal with financial matters.

The family have no near neighbours and the mother avoids seeing a doctor, so when she dies, no-one knows apart from the children. They take the decision not to tell anyone what has happened rather than risk having to leave their home and be split up.

Using the cement left over when their father died, the four children hide their mother's body in the cellar of the house and carry on as normal...at least for a while.

“At the back of my mind I had a sense of us sitting about waiting for some terrible event, and then I would remember that it had already happened.”

— Quote from The Cement Garden

Summary Of The Cement Garden

Synopsis of The Cement Garden by Ian McEwan

The Cement Garden is set in England during the sweltering heatwave in the summer of 1976.

Four children, Julie aged 16, 14 year old Jack, Sue aged 12 and their little brother Tom, who is 6, try to learn to cope on their own following the death of both their parents.

The story commences with the four children living in an isolated house with their mother and father. They seem to have no other family or friends and no near neighbours, but they live within walking distance of a town where the children go to school and where shopping is done. The children have close relationships with each other but less so with their parents, with their father in particular, coming across as a remote and emotionally detached figure. The sense of isolation is reflected in the fact that McEwan gives the reader very little information or insight about the parents but concentrates almost exclusively on the thoughts and actions of the children.

The father dies suddenly of a heart attack whilst laying a cement path in the garden. Soon afterwards, their mother begins suffering from unexplained tiredness. She does not consult a doctor as, without anyone else to look after the children, she worries that they will be taken into care of the Social Services if she has to go into hospital.

Eventually, the mother is confined to bed and too ill to carry on, gives up control of the household to her eldest daughter Julie. Julie totally takes over the "mother role" for the entire family, shopping, cleaning, cooking, caring for the younger children and making all household decisions as well as nursing her mother and keeping the seriousness of her illness hidden from Sue and Tom. The family survives on Social Security benefits payable to the mother, which Julie collects from the Post Office in the nearby town.

One day the children arrive home from school and find their mother dead. Heeding all too literally her dire warnings about their being split up if they get "taken into care", the children conceal the fact that their mother has died. They carry their mother's body down to the cellar and put it in an old trunk. They then encase the trunk in cement using the materials left over from the path their father was building when he suffered his fatal heart attack and carry on their family life in exactly the same way as they did while their mother was ill.

They don't tell anyone that their mother is dead and Julie continues collecting her mother's Social Security benefit and using the money to pay for the shopping and bills.

Over time, the four children fall naturally (or should that be unnaturally?) into the "roles" left vacant by the missing adults and a new nuclear family unit is formed, safe and secure from those who might threaten it's stability. On the surface this appears to work surprisingly well for a while. Eventually though, cracks start to appear...quite literally in the cement under which their mother's body is hidden and in other ways too.

Jack stops washing and immerses himself in comic books. Sue becomes increasingly insular and spends most of her time writing a diary, while Tom first starts dressing as a girl and then starts to regress into a baby, drinking milk from a bottle and squeezing himself into his old crib which he insists is put into Julie's room in the same way as he slept in his parents room when he really was a baby. Julie changes too as she starts to resent the restrictions that her situation has imposed on her and starts to crave her independence. As she develops into a young woman, she attracts the attention of an older man called Derek. She flirts with Derek, but keeps him at what she considers a safe distance - but Derek wants more from their relationship. Eventually she invites Derek back to the house and the children's world is turned upside down...

“Girls can wear jeans and cut their hair short and wear shirts and boots because it's okay to be a boy; for girls it's like promotion. But for a boy to look like a girl is degrading, according to you, because secretly you believe that being a girl is degrading.”

— Quote from The Cement Garden

The Cement Garden is available from Amazon.com 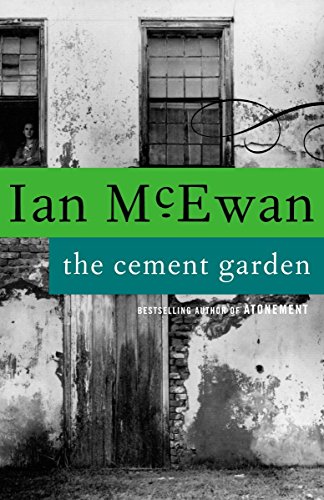 I couldn't put this book down, so it's just as well that it's short!

The Cement Garden is disturbing, yet compelling. McEwan never stoops to gratuitous shock tactics - he doesn't need to as his writing is so "real" and so vivid, you feel that you're part of this sad little family with their dark secrets. Jack stumbles through events in a dreamlike state as though he is afraid that if he really starts to think about what is going on, the horror of it all will destroy him and everything he holds familiar.

I was hooked straightaway and read the whole book in one sitting. The plot is on very similar lines to Julian Gloag's 1966 novel, "Our Mothers House" - the two books share a common theme of a group of children left to deal with the sudden death of a parent and their desire to conceal their orphaned status from the world for fear of being split up...

The subject matter is thought provoking and the story is a dark one, yet it's really quite beautiful in it's own way.

A film version of The Cement Garden was released in 1993 starring:

Did YOU Enjoy "The Cement Garden"?

Would you recommend The Cement Garden?