'The Perfect Nazi' by Martin Davidson

I first came across the book The Perfect Nazi when browsing through the shelves of the History section of my local library. I've always had an interest in modern German history; it intrigues me how a country could get into such a situation where perfectly normal, respectable people can allow such atrocities to happen and how much the average citizen actually knew of what was going on.

What particularly drew me to this book is the fact that it's not your average history book, written by somebody with an external view of the situation. The author, Martin Davidson, first came up with the idea of writing this book after finding out parts of what his grandfather, Bruno Langbehn, the Nazi of the title, did during the Second World War. It's the fact this is such a personal topic for the author that drives this book along so well and adds some real emotion to the narrative. Imagine discovering that your grandfather was a member of the Nazi party and the SS. That is what the author had to deal with.

Available to Buy on Amazon 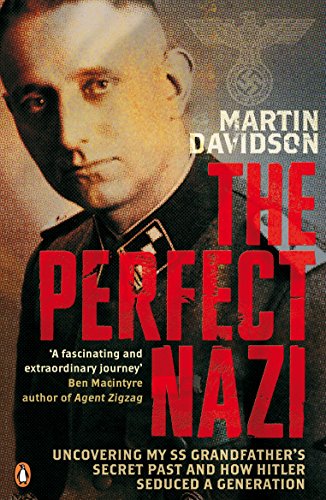 Martin Davidson works for the BBC in their History programming department. As a child he knew that his German grandfather Bruno was involved in the war, but didn't know any details and it wasn't a subject he felt he could broach with him. It was only after Bruno's death that Davidson finally found out some details from his mother. He then decided to research further and the result is this book; a comprehensive account of what led Bruno to make his choice and join the Nazis' push for power.

The book is written in chronological order from Bruno's youth, through the turmoil of post World War 1 Germany and the rise of the Nazi party, through World War 2 and finally what happened after the war. It is an extremely well researched book and draws upon many sources, ranging from academic work to actual records from the time that Davidson has managed to track down. It also contains family photos charting Bruno's life, both pre- and post-war.

Overall, this is an extremely fascinating book, charting the story of a fairly average German man and his seduction by the ideology of Hitler and his Nazi party. It will have you simultaneously engrossed and shocked, and give you a fantastic insight into what shaped Germany and her people in those fateful years between the wars.

The author, Martin Davidson, discusses his research into his grandfather's past.