In Ayodia there are festivities all over as the day has arrived when King Dasa-ratha will be crowning his eldest son, Rama, as the future King. But there is sorrow and anger in one part - that being with Kaikeyi - one of four wives of King Dasa-ratha, who wants her son, Bharata, to be crowned King. Her laments and complaints make Dasa-ratha give way to her, and she also makes him promise to send Rama away from Ayodia for 14 years. Rama accepts his step-mothers conditions, and sets out of Ayodia, with his wife, Sita, and younger brother, Lakshmana. The beginning of this journey is the beginning of the end of the tyranical King Ravana, and his rule on Ceylon.

Exposition: An archery contest was held for the hunt of Sita. Rama won the contest and was declared as the future king.

Rising Action: Because of Kaikeyi's jealousy, she requested Rama to be exiled in the forest of Dandak and let her son be the regent king.

Climax: Bharata followed Rama to convince him to return and be the king but he refused. So he took his brother's sandals as a proof that he is ruling in Rama's name.

Falling Action: A Raksha princess was rejected when she fell in love with Rama & Lakshmana. Inrevenger, Ravana sent a deer to tempt the the two brothers and stole Sita away.

Resolution: In the end of search, they successfully recovered Sita and returned to North India.

Your turn - Write a review, add a comment, or debate someone who disagrees with you.

The best line ever:

âBut I may not, seek Ayodiaâs ancient throne, for righteous fatherâs mandate duties son may not disown; and I may not, gentle brother, break the word of promise given. To a kind and to a father who is now a saint in heaven!â -Rama

More books by Sanjay Patel - Vote for your favorites, or add any I missed. 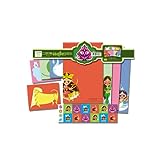 Hindu goddesses
Sanjay Patel's website, gheehappy.com, gives the browser a glimpse of the colorful characters from his book, The Little Book of Hindu Deities, plus some background story on this Pixar-employed animator. Born in England, raised in L.A., Sanjay has gone back to his Hindu roots to create his unique interpretation of various gods and goddesses. Our stationery sets and journal feature many super cute and bright characters. If you aren't already familiar with them, these items will be an enjoyable introduction!
Buy Now

Ramayana: Divine Loophole (Hindu Mythology Books, Books on Hindu Gods and Goddesses, Indian Books for Kids)
Artist and veteran Pixar animator Sanjay Patel lends a lush, whimsical illustration style and lighthearted voice to one of Hindu mythology's best-loved and most enduring tales. Teeming with powerful deities, love-struck monsters, flying monkey gods, magic weapons, demon armies, and divine love, Ramayana tells the story of Rama, a god-turned-prince, and his quest to rescue his wife Sita after she is kidnapped by a demon king. This illustrated tale features over 100 colorful full-spread illustrations, a detailed pictorial glossary of the cast of characters who make up the epic tale, and sketches of the work in progress. From princesses in peril to gripping battles, scheming royals, and hordes of bloodthirsty demons, Ramayana is the ultimate adventure story presented with an unforgettably modern touch. Q&A with Author and Illustrator Sanjay Patel Q: What was your inspiration to tell this story?Patel: Well I finally read the thing. I mean I suck at reading and everything. But I came across a great adaptation of the Ramayana by an author named Ashok Banker. I actually discovered the book via Nina Paley's blog. She's the one woman force behind Sita Sings the Blues, the feature length animated work about the same subject. After reading a few pgs on Amazon I ordered the first book by Mr. Banker which weighed in at over five hundred pgs. Keep in mind that was just book one of a seven part series. I just read and read and the thing slowly unlocked. And what I found was an ancient mythology with themes and symbols that were timeless and essential. Really meaningful stuff all wrapped up in a visually rich world of epic adventure. The story was just begging to be illustrated. Q: How did you get started working at Pixar? Patel: The only thing I was ever good at was copying drawings from comic books. I just drew, and nothing could ever get me to stop. All throughout school I was considered "the artist," which really just meant that I could make really bad drawings for peopleâs letterman jackets. A friend told me about Cal-Arts and animation. The school was the key. Most of Pixarâs directors have come straight out of Cal-Arts and its character animation program. I just walked in their footsteps and they ended up recruiting me after my second year. I've been at Pixar ever since, close to thirteen years now.Q: Describe your creative process. How do you create your illustrations? Patel: Once I have a concrete idea of the story point that I want to communicate, which is usually nailed down in the writing, I then think of one âstory telling image. For instance, it's a big story point when Hanuman, the monkey with special powers, uses his burning tail to set fire to the Ravana's capital city. Since this story has been told many times before I try and research what visual artist have done previously to communicate this moment. Here I pulled together reference from paintings and from vintage comics. Click on the image to learn more about Patel's creative process and see more example illustrations. Q: How long did it take you to create the scenes in the book? At one point the illustrations were getting churned out at about one every two and half days. I was at a good clip till I decided to redo the entire book three times. I kept fighting with trying to make the art light hearted and cute, but the story was anything but that. The Ramayana is pretty dramatic and graphic, and I eventually found a style and voice that captured those things. It only took me four years.Q: Which characters in the Ramayana did you have the most fun illustrating?Patel: I can doodle Ravana the ten-headed demon king in my sleep at this point. I also love sketching Hanuman and Rama. They both have really fun shapes to fiddle with. The cover of the book was actually a blast, it was probably the last illustration I did.Some of Sanjay's Favorites:Favorites Illustrator(s)Marc Boutavant J Otto Seibold Saul Steinberg William Steig Ronald Searle Richard Scarry Martin & Alice Provenson Mary Blair Charley Harper M. Sasek T. Biskup Lewis TrondheimFavorite movie(s)Back to the FutureAmelieThe Wrong TrousersRaiders of the Lost ArkThe MissionRaising ArizonaPrincess MononokeDumboAbyssBottle Rocket Favorite band(s) That's a toss up between M83 and Sigur Ros Favorite restaurant(s) Usually places that serve french fries and hot sauce.Favorite book(s)Phoenix Karma by Osamu Tezuka:Calvin & Hobbes Tenth Anniversary Book by Bill Watterson Angry Youth Comix by Johnny Ryan
Buy Now 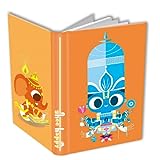 Sanjay Patel Journal
Sanjay Patel's website, gheehappy.com, gives the browser a glimpse of the colorful characters from his book, The Little Book of Hindu Deities, plus some background story on this Pixar-employed animator. Born in England, raised in L.A., Sanjay has gone back to his Hindu roots to create his unique interpretation of various gods and goddesses. Our stationery sets and journal feature many super cute and bright characters. If you aren't already familiar with them, these items will be an enjoyable introduction!
Buy Now

Sanjay Patel Goddesses Stationery Set
Sanjay Patel's website, gheehappy.com, gives the browser a glimpse of the colorful characters from his book, The Little Book of Hindu Deities, plus some background story on this Pixar-employed animator. Born in England, raised in L.A., Sanjay has gone back to his Hindu roots to create his unique interpretation of various gods and goddesses. Our stationery sets and journal feature many super cute and bright characters. If you aren't already familiar with them, these items will be an enjoyable introduction!
Buy Now

If you buy any of the books recommended above, this page automatically makes a donation to the incredible nonprofit, Donors Choose, which helps provide classrooms and students in need with resources that our public schools often lack.