I lived for a year in Kent, England. The eastern shore geography, wetlands, plants, and animals fascinated me. The area is a magical world.

I like marshes...the sun on my back, no humans in sight, the small pools full of critters, the flowers hidden in among the grasses, and the birds overhead and below nesting in the tussocks. I find a sense of isolation from the world of people and can walk on for hours through the wild watery grass gardens.

Paul Gallico, the author of "The Snow Goose," describes this Essex marsh in the opening pages of this book. I like how he describes the feelings of loneliness that the birds bring to the marsh: "It is desolate, utterly lonely, and made lonelier by the calls and cries of the wildfowl that make their homes in the marshlands and saltings - the wild geese and the gulls, the teal and widgeon, the redshanks and curlews that pick their way through the tidal pools."

Before Gallico introduces our human characters, he describes the delicate balance between humans and the marsh: "Of human inhabitants there are none, and none are seen, with the occasional exception of a wild-fowler or native oyster-fishermen, who still ply a trade already ancient when the Norman came to Hastings."

In 1930, 27-year-old Philip Rhayader bought an old lighthouse and the marshland and saltings surrounding it. Rhayader's arrival tips the balance between humans and the marsh. Rhayader is a hunchback who prefers, for many reasons, a life away from the nearby towns and villages, He makes a refuge for migrating fowl on his land, and this with his paintings of marsh and birds, plus a sixteen-foot marsh boat fill Rhayader's time.

Twelve-year-old Fritha from a Nearby Village

Three years into Rhayader's solitary life, a grimy twelve-year-old girl, described as eerily beautiful as a marsh faery but frightened of the hunchback from stories told of him, comes needing his help. She carries in her arms the burden of an injured snow goose and seeks Rhayader's recognized skill as a mender of wounded fowl. Firth (Fritha, a Norse name for peace and protection) is more concerned about healing the goose than her fear of the hunchback. She flees this first meeting once she believes that Rhayader will help the bird, but promises to return.

The young bird flying her habituated course to southern feeding grounds from her native Canada was pushed far off enough course to end up exhausted in the Essex marsh. Fowlers shot her; Firth found her.

Firth regularly returned to the lighthouse that first winter. She is there on a June morning in time to call Rhayader to watch their "Lost Princess," La Princesse Perdue, take to the skies. She is heading toward the summer breeding grounds of the snow geese.

The following October, above a lead-colored northeast wind, Rhayader hears the high clear note of the Princess above the lighthouse. She has returned to sojourn with Rhayader and Firth until she flys off for the summer breeding grounds. In the following years, the Princess came and went from the marsh regularly, but there was one year she did not come at all. Rhayader was desolate; Firth did not come to the lighthouse. The bird, however, did resume its schedule of leaving and returning. However, the times she was gone decreased in length until she left no more.

Firth also came and went from the lighthouse and Rhayader. The time is 1940, and Firth has matured from the twelve-year-old girl into a nineteen-year-old young woman. Rhayader is now thirty-seven. As they realize that the Princess has accepted the lighthouse and the marsh, unspoken words rise between Philip and Firth. Firth, suddenly frightened, flees filled with a sharp sense of loss.

Meanwhile, the outside world is exploding and burning. Bomber airplanes fly close above across the English Channel and the North Sea to France and back. Firth returns to the lighthouse, ostensibly to check on the Princess. She finds Rhayader loading his boat with supplies. She speaks plaintively, "Philip, Ye be goin' away?"

He explains about the men trapped across the North Sea at Dunkirk and how the call was out for all boats to help evacuate the men. Unsophisticated Firth feels danger and laments, "Philip! Must 'ee go? You'll not come back. Why must it be 'ee?” Rhayader charges Firth with looking after the fowl and sails toward the sea. The white-feathered Princess rises from the marsh to follow the boat while Firth stands watching them both.

Gallico stitches the rest of the novella together as though he had heard the story in bits and pieces. I will leave this brilliant and powerful ending full of local dialect and bewilderment for you the reader to enjoy without my comments. Firth waits and watches; Princess finally returns to "tell" Firth what she already senses. Rhayader will not return. The unspoken, but feeling, love between Firth and Philip climaxes in the wilds of the marsh. Firth takes the canvas that Philip painted with all of his soul of her and the Princess that first summer to her village home. Finally, the damages of war allow the sea and marsh to reclaim the lighthouse and all around it. The remaining wildfowl flee.

This story is as old as I am. First published in 1940 as a short story in The Saturday Evening Post, Gallico rewrote “The Snow Goose" to create a short novella published in book form on April 7, 1941. Though, I remember reading it several decades back I was astonished to learn that Gallico wrote this novella for young adults.

I question how much an adolescent might glean from the marsh descriptions, the dialects, and the underlying yearnings of nontraditional and uncommon love. "The Snow Goose" could be read and discussed as an animal fantasy such as "Old Yeller," "Where the Red Fern Grows," and "Call of the Wild," instead of as a love story.

I treasure this story of "The Snow Goose" as I do others that I love to read aloud:

"The Snow Goose" was first printed in 1941 by Alfred A. Knopf, Inc. a New York publishing house. There are now 30 hardcover copies by diverse publishers in English in print as well as a print copy in modern Greek and one in Vietnamese. Amazon has the most diverse formats available for the best prices. The novel is available in these formats: Kindle, Audiobook, Hardcover, Paperback, and MP3CD.

"The Snow Goose" Remastered and Imported.

"Music Inspired by The Snow Goose" comes in the form of an easy-to-listen-to conceptual album from Camel. A conceptual album captures a theme such as a novel, holiday or place from outside of music. Though the original is hard to find, a newly remastered edition is available from many outlets like eBay. It is available in the steaming form, MP3, and CD.

The BBC originally produced "The Snow Goose" starring Richard Harris (Philip Rhyadar) and Jenny Agutter (Fritha) as a Play of the Month in 1971. The Hallmark Hall of Fame then presented this production in the U.S. as a TV movie on November 15, 1971. It is impossible to find a DVD or any commercial form of this 60-minute movie. Agutter received an Emmy for her work in "Snow Goose."

However, mark042683 has recorded the original movie in five parts on YouTube. The quality is weak because it is an old print and rerecorded for YouTube with old equipment. There are several other 50-to-55 minutes copies of "Snow Goose" available on YouTube.

Dunkirk: A Race Against Time

This is a BBC production released initially in 2004 to coincide with the 60th Anniversary of the Dunkirk evacuation. The film uses a documentary format that includes an ensemble cast for reenacted action scenes, vintage photos, and movie footage; letters and still photos, as well as the interviews with evacuation survivors. The film shows some footage of the salt marshes and boat moorings. It also enriches the ending of "The Snow Goose."

The World of the Snow Goose Photo Gallery 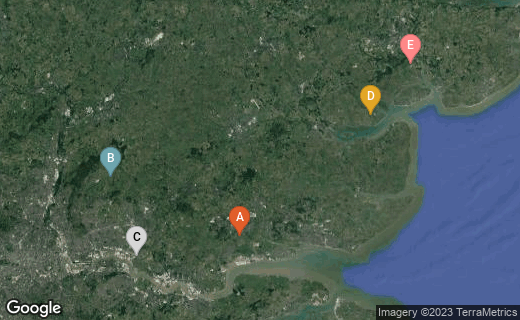 Is the Great Essex Marsh a Place for You to Visit?

How did this novella or its review make you feel about this part of England with its seas of grass and proximity to the English Channel and France?