Reading for me has been an escape, entertainment, a teacher, even a lifeline, and I love to share this passion with other people.

A Review of The Winter Ghosts

I read incessantly. I generally have at least two books on the go - one real one (!) and one e-book. My favourite genres are mystery and any novel set in a particular - any - country or readily identifiable place, and I'm not averse to a bit of a thriller either. Because they fulfil several of my criteria very nicely, I've read most of Kate Mosse's books as soon as they have appeared.

After reading several of her other books, this one, The Winter Ghosts, came as a surprise because it's a very slim volume whereas her others are very substantial tomes. The story itself filled only 239 pages in my copy and even that contained 14 or 15 full page illustrations. At the end there are a further 40 or so pages of author's notes, discussion notes, suggested reading. I'll leave you to tell me what else you think may have surprised me.

It's set about 10 years after the Great War (World War I) ended when Freddie, still grieving the death of his elder brother, sets off on a tour of the south of France to try to improve his state of mind. He didn't get too far before his car went off the road and he was forced to stay in a nearby, oddly silent, village.

From fairly early on it seemed clear that this was a ghost story. I don't want to spoil things by going into too much detail but I will say that Freddie was a bit slow on the uptake. I didn't much care for him as a character, nor were any of the others sufficiently well defined to make me feel anything very strongly about them, one way or the other. Most of all it was the setting that pulled me in and it most certainly did that.

With 2014 being the centenary of the First World War, it seems an appropriate read for the next few years at least, because not only is it a straightforward ghost story (if they are ever straightforward) but it does explore the feelings of a young man who has seen the terrors of war at first hand. This was a generation blighted by war but not really allowed to air their emotions.

Nevertheless, it's a quick and enjoyable read, really quite short, and it does set the most superb atmosphere - haunting, eerie, thrilling and almost gothic. It's best read on a dark winter's night, best of all with a wind howling, snow falling....

If you are looking for a book to read straight through while curled up in front of a blazing fire, this is the one. Make yourself comfortable, close the curtains and off you go. You will enjoy the atmosphere, the plot, and the setting, and you will long to visit the Pyrenees yourself.

A village in the Pyrenees

Do ghosts haunt these streets?

I've been in and through the Pyrenees many times during my time in France. It is an area of stunning beauty and, yes, it can seem quite spooky at times: silent though beautiful villages, winding and lonely roads through the mountains.

I was lucky enough, years ago, to win a cookery course in a tiny hotel in one of these Pyreneen villages. It was an experience to remember and cherish for many years! I can so easily picture the setting of The Winter Ghosts because it is so very authentic. It's the main reason I liked the book so much.

Bones and shadows and dust. I am the last. The others have slipped away into darkness.

She contributes frequently to radio and television programmes, writes a column for The Bookseller, campaigns for libraries and literacy, was co-founder of the Orange Prize for Fiction (for women writers). The list goes on and on.

Her latest project has been an illustrated book to celebrate the 50th anniversary of the opening of the Chichester Festival Theatre, a theatre I myself visited several times when I was living nearby.

The Mistletoe Bride and other Haunting Tales

Published in time for Halloween in 2013, this is a collection of mysterious and memorable short stories set in both England and France, perfect for winter's nights. They aren't thrilling in the sense of horror stories, but they will make you think and stay with you for a long time.

Kate Mosse's suggestions for further reading - If you enjoy ghost stories, these are some of the best

These suggestions come from the back of "The Winter Ghosts".

The Woman in Black by Susan Hill

The Turn of the Screw by Henry James

The Little Stranger by Sarah Waters

I haven't read these books myself apart from Woman in Black but if Kate Mosse is recommending them, no doubt I should! My wobbly pile of books that I should read has spawned and there are now several wobbly piles of books around the house waiting for my attentions.

My own choice of spooky stories

These are all ghost stories I've read and enjoyed. They are very different from each other, I think, and one at least may not even be considered a ghost story - Rebecca. Tell me what you think.

Rebecca may not be a ghost story but it is undoubtedly a haunting. Its title is Rebecca but Rebecca never appears in the tale other than to haunt the heroine - whose name we never discover.

A Christmas Carol by Charles Dickens surely needs no introduction, the classic ghost story telling of Scrooge's haunting on Christmas Eve night. He is visited by the Ghosts of Christmas Past, Christmas Present and the Ghost of Christmas Yet to Come.

Dark Matter by Michelle Paver appeals to me because of its scientific background and I'm a scientist at heart. It just goes to show that science and ghosts aren't mutually exclusive, at least in the world of novels. This book is the story of a year-long Arctic expedition as told in diary form by the only member of the original group of five left ... alone. Or is he alone?

Another story by Susan Hill, The Man in the Picture, describes the power of a painting to captivate in a more literal sense than usual. It's a short story - don't miss it!

Finally, I've just finished Her Fearful Symmetry by Audrey Niffenegger, and I do believe it must be the best of all. If you're at all interested in Highgate Cemetery in London, you will be fascinated, all the more so if you admit to the possibility of ghosts... 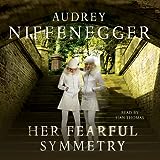 Another Anthology of Ghost Stories

To be published in time for Halloween 2015, Audrey Niffenegger has compiled a selection under the title "Ghostly: A Collection of Ghost Stories". There must be something for everyone here: some old, some new; some scary and some not; some are disturbing and some will make you laugh.

The Story of the Ghost Story - BBC

Your turn - Write a review, add a comment, or tell me about some other great ghost stories

What do you think of The Winter Ghosts or any other ghost story?