I am a part time writer, part time traveler, full time IT professional loving the adventures that life offers us each day.

Tintin a Masterpiece created by Herge.

This Hub is a dedication to the fantastic success of the French cartoon character, Tintin, created by Herge. The Tintin character has been in a slumber for the past couple of years, but has lately been in the news again due to the great success of the latest Tintin motion picture. This has reminded me of the influence this character had in getting me to love reading. I loved the adventures that Tintin ended up having in each book. Having to deal with problems sometimes created by his own friends, but more often his enemies, he always managed to solve the mysteries, leaving most readers very satisfied. Please find below a summary of the main characters, which I feel capture the magic that is Tintin.

The Cast of Tintin

Tintin is the hero of the story. He is a reporter, an adventurer, a real all round action junkie! He is from Brussels in Belguim. The character was created by Herge in 1929 in character strip called 'Le Petit Vingtime' - Tintin in the Land of the Soviets

Tintin is described as bright eyed young adult with an inquisitive mind who is always analytical when looking at evidence.

Something to wear to show your love for Tintin! 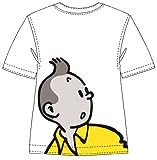 TINTIN PORTRAIT T-SHIRT FROM THE ADVENTURES OF TINTIN XL/WHITE
White T-shirt with Tintin - various sizes. I find it sometimes very rewarding wearing fan related clothing. I've got this Tintin t-shirt a while ago and thought it best to include it on this hub. I've also got Asterix, Star Wars and Minion t-shirts. These t-shirts always end up being very good conversation pieces.
Buy Now

Snowy is a white fox terrier. He first appeared in Tintin in the land of the Soviets in 1929. The character is based on a terrier dog that belonged to the owner of a cafe in Brussels that Herge used to visit. Snowy provides the necessary assistance to Tintin throughout the series and he is one of the main characters. There are some parallels between Snowy and Dogmatix the little dog in the Asterix books. Dogmatix also provides some support to Asterix and Obelix and is a hug-able little dog!

Captain Archibald Haddock is the opposite from Tintin on the personality level. He is abrubt, a bit coarse and he loves his rum and whiskey. He is sometimes sarcastic but does provide assistance and support to Tintin. He would even go as far as sacrificing his own life to save Tintin.

Professor Cuthbert Calculus is genuis that holds doctorates in various sciences. He is the inventor that assist Tintin in various adventures. He is a bit deaf, usually when Captain Haddock speaks. He used to be quite athletic in his younger days although this is not the case anymore.

These two incompetent detectives provide a lot of funny distractions in the books. In French they are called Dupont et Dupond. They usually wear bowler hats and carry walking sticks when at home, but when they travel they are always seen in the local costume of the country they are visiting.

They are not related and usually introduces themselves as Thomson without the "p" and Thompson with the "p".

The author Herge did give some indication as to who he based these two characters on, namely his father and uncle, who were identical twins and used to wear bowler hats!

Who is your favorite Tintin character?

Who is your favorite Tintin character?

If you have never watched or read a Tintin story, then do yourself a favor and watch the below trailer of the very popular Adventures of Tintin movie.

I am a big Tintin fan and do feel that the Tintin books have played a big part in my upbringing and many other kids around the globe. These books have helped many children to start reading, hungry to find out what is going to happen on the next page. If you have never read or watched any Tintin related books or media, you are missing out on experiencing the joy of being part of a great adventure, given to us by Herge, a real genius!

What is your favourite Tintin book?