Adele Jeunette has been a librarian for 20 years. She lives in Denver, not too far from the Molly Brown house.

Margaret Brown was many things: wealthy, high society, outspoken, compassionate and colorful. But she was never "Molly." The gossips, pundits, and Hollywood mythmakers who called her the "Unsinkable Molly Brown," got the "unsinkable" part right, but they missed the boat when they spun tales of her as an uncultured country hick desperate for a society's approval.

In this photo, she is presenting a loving cup to the courageous and resourceful Captain Rostron who drove his ship at maximum speed through an ice field to aid the Titanic survivors. (Library of Congress photo, Bain News Service)

Brown had a rags-to-riches ascendancy to wealth when her husband's mining interests paid off handsomely. She maintained a high profile in society, and when she survived of the sinking of the Titanic, all these events assured that her story would become a legend. During her life, the society gossips and newspapers loved to spread unbelievable tales about her. When she died, these mythmakers, went all out, spinning out colorful - if hardly accurate - descriptions of her adventures, some of which turned into tall tales.

Molly Brown: Unraveling the Myth
Kristin Iversen, Brown's biographer, summarizes the many folktales about "Molly Brown" for us, tongue-in-cheek. According to the legend, the newborn Molly Brown, born to a poor drunken Irishman and his delicate wife, survived a giant tornado when she was left in the house alone. But Molly was a survivor. The myth-makers describe her as a girl who disdained housework, school, and church and instead spent her time as a tomboy learning to chew tobacco and spit as well as any of her brothers’friends. They have her going out West and finding herself a rich man to marry. And they imagine her as a sort of modern-day Eliza Doolittle, trying to overcome her backward ways and impress Denver society. In actuality Iversen tells us, Margaret Brown (no one ever called her Molly during her lifetime) was born to a hard-working, staunch Irish Catholic couple. She learned to read and write quite well at school, and whatever formal education she did not share with her rich peers she worked to remedy with tutors and courses of study. The following sections contain information set forth in this biography.
Buy Now

Brown did harbor hopes of finding someone fairly well off to marry so that she could provide a comfortable retirement for her father, but she decided that she was "better off with a poor man," and married J. J. Brown. He was a miner through and through, and with careful management and a lot of luck, he eventually made his fortune.

Margaret Brown did well in Denver society, becoming a consummate organizer of charity events and a trendsetter in fashions, never shy about showing off her bold outfits for the press. It's true that she wasn't part of the so-called "Sacred 36,” a group who considered themselves too good for almost anyone else in the city. But there is not much evidence that Brown was much troubled by not being included in this haughty group. And, of course when she became a cause clbre and heroine of the Titanic disaster, the Sacred 36 were only too happy to invite her to tea.

The Titanic and Mrs. Brown

Author Kristin Iversen starts with the most dramatic episode in Margaret Brown's life, the sinking of the Titanic. We are there with her, getting to know the passengers and seeing how everyone reacts when they realize the ship is sinking. We see how Brown worked to help as many as possible, especially in the lifeboat where she wrapped her expensive furs around men's legs to keep them warm, kept up the morale and urged the woman to row, and challenged the dour crew member, Robert Hitchens, who seemed convinced that they would all perish.

After reading this book, we understand that Margaret's reaction to the disaster was a natural extension of how she lived all her life. The predominant portrait that comes out is a woman who cares deeply about the plight of others less fortunate than herself. She continually works for women's rights, for the families of minors exploited by companies, and for underprivileged and minorities. Even right before her death, she made sure to arrange for her annual shipment of close and toys to the children of Leadville, the town where she and her husband had found such wealth.

Brown also knew how to get attention. Besides the forward-looking fashions, she devoted herself to learning the performing arts. She spent two years learning how to yodel, and often performed for all kinds of audiences. She also studied acting in France and was good enough to be awarded one of their acting trophies.

She used this media savvy in support of her causes. With her connections, her ideas, and her talents she could always ensure a crowd would come to her fundraisers.

All in all, this biography is an eminently readable and enjoyable description of the life of a woman who took her fortune, lived the good life, and work tirelessly to help others. The ending chapter provides a fitting closure to this description of Margaret Brown's life. After assuring her family that she was alive and well, Margaret stayed on board to help those third class survivors who had no one to meet them at the harbor. The other rich ladies were spirited away to exclusive hotels, but Brown stayed until she known as everyone was taken care of.

Brown's house in Denver has been preserved as a museum to her memory. (Though under the name "Molly Brown." It appears that the Hollywood version of her name is the one that is going to stick.)

Heroine of the Titanic: The Real Unsinkable Molly Brown
If you know a child who is interested in the story of Titanic survivor Margaret Brown, this engaging nonfiction book is the best one to get. Brown comes alive in this personable recounting of her life. Landau begins within incident to pique the reader's interests: a fortuneteller in Cairo is reading the palm of a wealthy traveler. He shakes his head and solemnly repeats the words "Water, water, water." He cannot speak much English, but he gets across the point that he sees a sinking ship surrounded by people who are drowning. His customer, Margaret Brown, is not impressed. The fortuneteller knows that she will be going to sea soon, and she believes that he is just making up something based on what he knows. The first chapter describes Brown's experiences on the Titanic. The second describes her heroism on the Carpathia, and her continued work for their women and children left destitute when their breadwinners died on the Titanic In chapter 3 we learn of Brown's early life in Hannibal Missouri, and in subsequent chapters we learn about her marriage to J. J. Brown, their life as a young family in Leadville Colorado, and their move to Denver after striking it rich with a gold mine. Throughout the account, Margaret Brown's activism comes to the forefront. Her efforts on the behalf of the Titanic survivors were just one segment in her lifelong endeavors to help out the needy, whether they were miners’ families, disaster survivors, or minority populations.
Buy Now 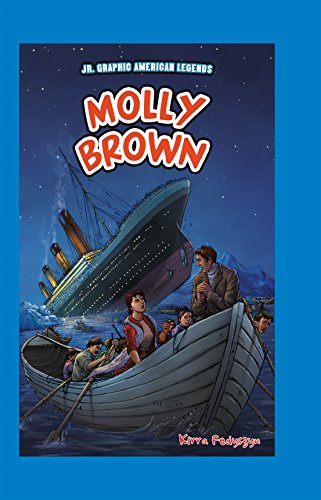 This biography of Margaret Brown would be helpful to children who want a quick run-through of Brown's life. It's in a graphic novel format, which means that the pages look quite a bit like those of a comic book, with color illustrations, panels that tell the story, and dialogue balloons to indicated when the characters are talking to each other.

Brown's life story, however, is told more in the style of a nonfiction book, which is ultimately the function of this title. Each panel has a block of text which tells about a portion of Margaret's life. The dialogue adds a little bit of interest to the text, but doesn't really come up to the level of gripping storytelling. In about 20 pages, the book hits the highlights of her life: Her move from Hannibal, Missouri to Leadville Colorado, her work with the miner's families in Leadville, her marriage to J.J. Brow, their rise to wealth, her grit during the Titanic disaster, her subsequent work to help the less wealthy victims of the disaster, and her portrayal in theater and film.

Kirra Fedyszyn, the writer and illustrator, seems to have taken care with historical accuracy. I've see the Molly Brown house in Denver, and the illustrations look just like it. 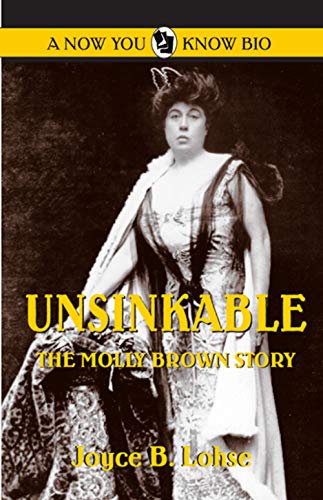 Unsinkable: The Molly Brown Story (Now You Know Bio Book 6)
This brief biography is serviceable for children who read at about a fourth to sixth grade level. It begins by talking about her role as a hero during the Titanic disaster, then backtracks to talk about her childhood in Missouri, her days in Leadville where she met her husband, their sudden rise to wealth, her adventures abroad including sailing on the ill-fated maiden voyage of the Titanic, and her continued social activism later in her life. In straightforward fashion it describes the arc of her life and makes a special point to identify all the myths that sprung up around Margaret Brown and what the truth actually was. This book has an "educational" feel from the get-go. Vocabulary words are bolded throughout, which makes for a bit of a jarring experience for readers who are trying to read it for the narrative. Several black-and-white photos of Brown and her surroundings are included. If a child needs to read a biography into a report, this is a thoroughly agreeable biography for such a purpose.
Buy Now