Snails - not so bad

I remember when I was a child just after World War II, my brother and I used to line up a few snails each and then have snail races across the garden tiles. There was a shortage of toys at that time, so children would make their own outdoor entertainment. I'm sure it was just as exciting as sitting in a bedroom surrounded with the latest technology, pressing buttons (although snails might have other views).

With their slimy striated bodies and disgusting creepy habits, they make my stomach turn. Have you ever felt a slug crawl over your hand? Regrettably, I have. It's cold and wet, like a tongue licking you, but not so dribbly. Then you try to remove the slime, and find it adheres to your skin and you need a scrubbing brush to remove it.

I would say "live and let live", were it not for the way they disrespect my garden - they've turned it into their favourite restaurant, and I'M NOT HAVING IT!

I even get them sliming over my kitchen and bathroom occasionally - I've never found out quite how they get there, but I expect they come up from the air-space under the house, where the foundations are, and then up through a gap in the floorboards. At least I've never found one in the bedroom. That would be too much!

Putting my feelings about garden slugs into poetry is satisfying, whilst not actually harmful to the environment

My Poem About Slugs - The Arena of War

The Arena Of War

Last night I remembered to bring in the washing

Before my seedlings welcomed the dark rain.

And when I awoke

My torchlit search for slugs

One caught in the act still gorging

With my snapped beanstalk sticking out of his mouth.

"You won't be doing that again" I whispered

(So as not to disturb the neighbours)

As I despatched him,

along with his cohorts -

Just as it got light;

Waterboarded in a pot of saline solution -

Important to Remember on Your Killing Spree:

Don't be seduced into thinking

a slug is harmless and apparently defenceless -

remember it can decimate your tender new seedlings

Here are Some Sluggy Things You Can Buy

Some Life-like Plastic Slugs - Oh what fun you could have with these! 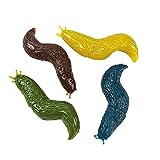 A Big Fat Slug Lurking in My Grass

Two Slugs Eating My Precious Beans Which I Had Watered And Nurtured For Many Weeks (The Beans, Not The Slugs)

Some Snails Survive Being Eaten by Birds

Research Scientists in Japan have discovered that about 15% of micro 2.5mm land snails Tornatellides boeningi survive intact after being eaten by birds known as the Japanese white-eye, and can be found alive in birds' droppings.

It follows that bird predation could be a key factor in the spread of snail populations.

As an experiment, scientists fed the birds with the snails to see whether any survived the digestive process and discovered that about 15% lived after passing through the birds' guts, and one even gave birth immediately after this process.

The main factor assisting the snails' survival after being eaten is their small size, according to the scientists, and they fared better than previous experiments with larger snail species whose shells suffered severe damage during ingestion by birds.

Poll About Slugs - How do you match up against other pollsters?

Some gardeners behave in a calm and rational way on most occasions. But slugs can bring out strong emotions and the populace is divided about how they view slugs - "lovely silky little wriggly darlings", or "slimy enemies of the people".

How do you react when you find a slug caught in the act of devouring your precious plants?

Say Something Here - What Are Your Thoughts About Slugs or My Slug Poem?