Why I Love the Midnight Louie Series by Carole Nelson Douglas

BarbRad loves cats: reading and writing about them, photographing them, and entertaining them. She wishes she could still have one.

Midnight Louie is King of the Feline Private Investigators

I met this huge black tomcat rather late in my life, when my mom was reading Braun's Cat Who series. I started reading those so we'd have more to talk about, since she loved them. Unfortunately, I didn't meet Midnight Louie, created by Carole Nelson Douglas, until after Mom was gone, so I never had the pleasure of introducing her to him.

Mom liked most cat mysteries. It's probably true that she liked most mysteries, in fact. In order to feel closer to her after she died, I started reading mysteries, too, especially those I knew she had enjoyed. Her favortie place to find her mysteries was the public library. So I started making trips there, too.

Our library isn't always stocked with all books in a series, and I do like to read the books of a series in order. When I hit a gap in the Cat Who books, I scanned the shelves for other cat mysteries and came upon covers with a big black cat on them. I picked up the first one in the series, and was captivated after the first few pages of Catnip.

"There used to be a lot of fat cats in Vegas. And one would be me.

I have always kept a low profile...You do not hear about me on the nightly news. That is the way I like it. That is the way any primo PI would like it. The name is Louie, Midnight Louie. I am a noir kind of guy, inside and out. I like my nightlife shaken, not stirred. Being short, dark and handsome...I am your perfect undercover guy. I also like to hunker down under the covers with my little doll. Miss Temple Barr and I make perfect roomies. --Carole Nelson Douglas in the voice of Midnight Louie

How much do you know about Midnight Louie?

Have you ever read any of the Midnight Louie Series Books?

Why is the Midnight Louie series so special?

It's not just that I like cats (and Midnight Louie books are full of them.) It's not just because I enjoy reading mysteries that don't focus primarily on blood and gore. It's that the plots are simply tools to help you get to know and care about the characters. Each book does have a mystery to be solved, if not several, and usually one of these involves a corpse . The protagonist, Temple Barr, who is the public relations person for the Crystal Palace in Las Vegas, seems to be always present when a body is found. Or, when she is around, bodies seem to be found. She is always trying to solve the mysteries before the police can, and often takes foolish chances. She usually succeeds, with some help from Midnight Louie, his family, and friends (both canine and feline.) So each book does solve a mystery by the end. However, one could also look at the series as a whole as one completed mystery, since at the end of each book one is left with more questions than answers.

What makes this series special to me is that I care about the characters and look forward to learning more about them and seeing what they do from book to book. I'm getting to the end of the series, and I just finished Cat in an Ultramarine Scheme, which is #22 , last night. I couldn't sleep for an hour because I kept interacting with the characters in the context of the plot in my mind. I wondered what would happen when key characters came together again in the next book, and was frustrated because it might be a while before I could get my hands on it.

Meet Midnight Louie Yourself - Or introduce someone else.

It's easy to get started with these first five books in the series. Each book builds on the one before it, so it is best to read these in order. Otherwise you might miss important information you need to know about the characters as the complete plot, which spans the entire series, unfolds. It's always best to make sure you've got at least one book past the one you're currently reading, because these books will often leave you hanging at the end. You will want to begin the next book immediately. If, for some reason, you must read these out of order, Midnight Louie usually claims a place at the beginning of each book to bring the reader up to date on anything important from the previous books 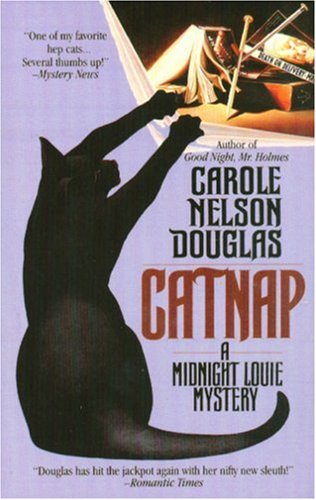 Midnight Louie is a Feline Private Investigator - He knows how to stick his nose into everything to check it out to keep Temple Barr safe.

The two met over a corpse at a booksellers convention in Las Vegas, where Temple was chasing a "stray" cat thinking it was one of the two missing Baker and Taylor mascots. Louie had discovered the body first and was staring at it when Temple tripped and practically fell right on it. This meeting was the beginning of a beautiful friendship and partnership in bringing murderers to justice. The two became roommates, but Louie was free to come and go as he pleased and the rest is history.

Of course, Louie has some competition for Temple's bed from the Mystifying Max, the disappearing magician Temple loves, and as the series progresses, and it appears Max may never return, the new tenant at the Circle Ritz, Matt Devine, an ex-priest, begins to compete for Temple's affections. The eccentric landlady, Electra Lark, and her physic cat, Karma, add some humor to the series.

Every series needs some villains to keep things interesting, and not just criminals. Temple's arch-enemy and competitor, the unethical Crawford Buchanan, loves to antagonize her, and the homicide detective, Carmen Molina, always seems to consider Temple, Max, or Matt, prime suspects for some murder or other, whether past or present. Later, we meet other villains, such as the infamous Kittie the "Cutter" and some who seem to be villains at first, such as Rafi, who has followed his ex-wife, Carmen Molina, to Vegas and seems to be up to no good.

As the series moves along, we meet several more characters who bring out the best and worst in Temple, Max, and Matt. They are too many to list here, but you will meet them one by one as the series unfolds . In Catnap, the first book in the series, you meet the most important human characters. You will meet the rest of the feline characters -- the rest of Louie's family -- as the books progress. As each new book is written, Temple, Max, Matt, and Molina become much more developed characters. This is quite different from Lilian Braun's Cat Who series, where Quill doesn't seem to change much as a person from book to book, and KoKo and YumYum, in my opinion, don't have half the personality of Midnight Louie and his relations.

After the first two books, Catnap and Pussyfoot, the books progress in alphabetical order from Cat on a Blue Monday to (currently) Cat in a Zebra Zoot Suit, which I hope to have soon. What I hate about finishing these books is waiting a year for the next one to be published. I'm wondering what will happen to Midnight Louie now that Douglas has reached the letter Z. I will very much miss him should he disappear forever.

The "V" Book in the Midnight Louie Series

Don't miss my review of Cat in a Vegas Gold Vendetta. It picks up the story of Temple Barr at a point in her life when things are getting very complicated. The missing Max has reappeared at a very awkward time. See cover below.

An Important Book in the Midnight Louie Series 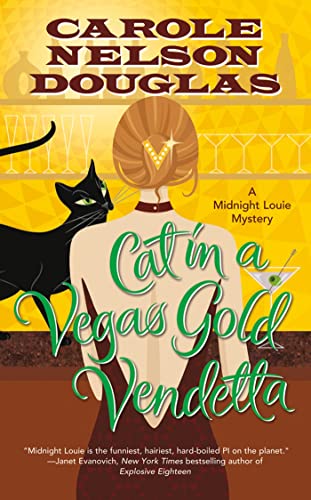