A little bit of introduction

Everyday, I usually think of what to write and so, I came across this topic. It is so happened that during one evening, my parents were taking about their bougainvillea plant at our garden gate hedge. I searched out on the next day to see whether anyone on Hubpages has actually written about bougainvilleas. And there was someone who has actually written about it but not in full context. And then I went into Google and found only a few website about bougainvilleas and one of the website that I found was this www.bgi-usa.com. Nice website! I decided to extract some of the information from the website mentioned and change a little bit, here and there.

Bougainvillea's versatility is legendary and is an immensely showy, floriferous and hardy plant. Virtually pest-free and disease resistant, it rewards its owner with an abundance of color and vitality when it is well looked after. It makes one of the best hedges, bushes, and curb-liners. Along with palms and sunshine, the cascading blooms of bougainvillea provide in our house makes the garden look so colourful with life. That is the reason why my parents planted the bougainvillea at the garden gate hedge. Bougainvillea can be coaxed into a small manageable pot plant or a sizeable tree, to spread itself vertically on a wall, or climb up a trellis and form a luscious crown or burst forth into graceful arches.

It is definitely true to say that without the bougainvillea, our roads, parks, and private gardens would be a lot less colorful that what we see today. Almost everywhere we go, its brilliant hues and cheerful bursts punctuate the lush green mantle that cloaks our tropical environment. As a woody clambering vine, bougainvillea will stand alone and can be pruned into a standard, but it is perfect along fence lines, on walls, in containers and hanging baskets, and as a hedge or an accent plant. Its long arching branches are thorny, and bear heart-shaped leaves and masses of papery bracts in white, pink, orange, purple, and burgundy. Many cultivars, including double flowered and variegated, is available.

Below is a little history of bougainvillea. Geeze! I didn't know bougainvilleas are origninated from Brazil. Did you know? Read about the history!

In 1768, a native to coastal Brazil, the bougainvillea was discovered in Rio de Janeiro by French naturalist Dr. Philibert Commerson. The plant is named after his close friend and ship's admiral Louis-Antoine de Bougainville, who commanded the ship La Boudeuse that sailed around the world between 1766-1769, and in which Commerson was a passenger.

In 1789, 20 years after Commerson's discovery, first published as ‘Buginvillea' in Genera Plantarium by A.L. de Jusseau. In the 1930s, the genus was subsequently split in several ways until it was finally corrected to 'Bougainvillea' in the Index Kewensis. Originally, B. spectabilis and B. glabra were hardly differentiated until the mid 1980s when botanists recognized them to be totally distinct species. In early 19th century, these two species were the first to be introduced into Europe, and soon, nurseries in France and England did a thriving trade providing specimens to Australia and other faraway countries. Meanwhile, Kew Gardens distributed plants it had propagated to British colonies throughout the world. Soon thereafter, an important event in the history of bougainvillea took place with the discovery of a crimson bougainvillea in Cartagena, a Spanish port in the Mediterranean, by Mrs. R.V. Butt. Originally thought to be a distinct species, it was named B. buttiana in her honour. However, it was later discovered to be a natural hybrid of a variety of B. glabra and possibly B. peruviana - a "local pink bougainvillea" from Peru. Natural hybrids were soon found to be common occurrences all over the world. For instance, around the 1930s, when the three species were grown together, many hybrid crosses were created almost spontaneously in East Africa, India, the Canary Islands, Australia, North America, and the Philippines.

There are many types of species and hybrids of bougainvillea. The followings are few :

Bougainvillea spectabilis is a large climber with distinctive curved thorns, and hair on stems and leaves. The bracts are crinkled, fairly large, egg-shaped, and possess colors in the rose, rusty-red, and purple. Flowers are cream in color, slender, with very hairy tubes. Leaves are large, ovate to rounded, leathery in texture and hairy underneath. The bark is pale and corky. Branching is close and short, giving rise to a very dense plant. The first species collected, it was described from dried specimens by Willdenow (1798).

Bougainvillea glabra has thinner branches that spread in many directions and have distinctive pointed triangle-shaped bracts that come in a range of whites, lilacs, mauves, and purples. Thorns are short, thin, and curved at the tips. Leaves are fairly evenly elliptical, widest about the middle. The small cream flowers are relatively big and tube-shaped. The also tend to flower virtually continuously, and often down the entire length of the branch. Originally described and named by Choisy (1849).

Bougainvillea peruviana has a branching habit that is looser and more open. This is a climbing, spiny, spreading shrub with greenish bark. Thorns (spines) are thin, straight in youth and curved when older. Leaves are thin and ovate to broadly ovate. The small roundish bracts, usually in light to dark magenta colors, are quite delicate to the touch, and are crinkly in appearance. Flowering is recurrent after strong vegetative growth in response to dry weather. This species was described and named by Humbold and Bonpland (1808).

Bougainvillea may be pruned at any time of the year. Bloom initiation does not depend upon pruning - a bougainvillea has a bloom cycle followed by a rest period whether pruned or not. A hard prune is recommended when you need to contain growth or when you are preparing to move your bougainvillea indoors for the winter. The ‘Soft Prune' is recommended for bougainvillea only when trying to obtain a special form. A bougainvillea, like most vining-type plants, will continue to grow outward without sending out side branches from each leaf-bud point unless the stem is pinched. If you want one long stem, then don't pinch out the tip. By pinching out the tip, most bougainvillea cultivars will send out new stems from 2 to 3 leaf-buds below the cut. Some varieties do not send out any new stems, so their appearance is always stringy or bare.

Brighten Up Your Life With Bougainvillea
Buy Now 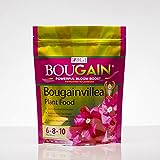 A bougainvillea blooms best when pot-bound so do not be tempted to re-pot unless you must. It is best to leave the plant in its original container until the roots have replaced all of the soil and you can't keep the plant well watered. For example, it is not unusual to grow a bougainvillea in a 1 gallon pot for three or more years. When it is necessary to re-pot remember that a bougainvillea has a very delicate root system and a fragile root to stem connection. Handle bougainvillea with care. Root pruning is not recommended when re-potting bougainvillea - in fact, disturb the roots as little as possible because the plant might go into shock and take weeks to recover. Bougainvillea love to be pot-bound, so pot in the smallest container available for the purpose you desire. Re-pot into larger pot sizes gradually. For example, move a plant in a 6" pot into a 9" or 10" pot. Several years later, you can then move up to a 14" pot. The root system needs time to grow into each new pot.

Primarily, bougainvillea are propagated by stem cuttings. Early in 1992, two scientists from North Florida Research and Education Center shown that using copper hydroxide fertilize pots help cuttings to grow more fibrous roots. This manner would make the roots less prone to breakage. Proper growth and development by feeding the plant a higher phosphorus fertilizer will help to keep the roots as strong as possible.

What do you think of this topic?