Once again this year my husband and I attended the Heritage Harvest Festival at Monticello.

It was a fun day.

We toured the gardens and the grounds, attended a workshop on growing fall vegetables, had a nice lunch and bought lots of seeds for fall. We also picked up a small nursery pot of Gentiana austromontana, familiarly called Southern Mountain gentian or Appalachian gentian.

According to the United States Department of Agriculture (USDA) plant database and the Lady Bird Johnson Wildflower Center, Gentiana austromontana grows wild in as an herbaceous perennial in West Virginia, Tennessee, Virginia and North Carolina. In other words, it’s a native plant in those states.

I’m hoping Appalachian Gentian will do well here in our Maryland garden, too. It’s an elegant flower that reaches heights of a foot to two feet, sending up slim, leafy stalks that produce flowers from August through September.

So often “blue” flowers are actually lavender, but Appalachian gentian’s blossoms are truly blue, which is another reason I’d like to establish it in our garden. We have so few blue, really blue, flowers.

The instruction tag that accompanied our pot of Appalachian gentian says that it prefers dry to average soil and sun to partial shade, so I’m placing it in a dry, full-sun location, primarily because that’s what we have the most of in our garden! Of course, I’ll water it daily until it’s well-established and then treat it like the rest of our perennial plants, mulching it with compost every few months and watering it deeply every two to three weeks during dry spells. 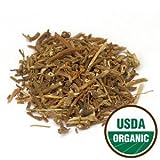 There are all sorts of gentians that grow in all sorts of climates, from prairies and mountain regions to deserts and rain forests. (You won’t, however, find gentians in the Antarctic.) Often, their roots and (less often) their bark are used in herbal remedies. In fact, you may have seen gentian root for sale online or at your local drugstore.

The Gentian Research Network notes that gentians of the Gentiana genera are commonly used in herbal preparations, cosmetics, food and drink, especially Gentiana lutea, which is commonly used as a flavoring in alcoholic beverages in Europe.

According to Web MD, gentian contains a chemical that purportedly dilates blood vessels. Its roots and (less frequently) its bark are used in cosmetics as well as some food and drink. Gentian is also used in herbal remedies for a wide range of medical conditions, from cancer to fever, cramps, high blood pressure, skin wounds and digestive problems, including bloating and intestinal parasites.

Web MD advises those who collect gentian in the wild to be careful that they do not confuse it with white hellebore (Veratrum album), a poisonous plant that it somewhat resembles.