"Grass is the hair of the earth." --late German horticulturalist Karl Foerster

Try planting bunny tails along a walkway. Its fluffy white cottontails, which first appear in early summer, will tickle your legs as you pass. At 1 to 2 feet high, bunny tails is just tall enough to tickle a toddler’s nose, too.

Bunny tail blooms look like the real thing thanks to their soft, downy appearance and life-like size. (Blooms are 2 to 2 ½ inches wide!)

In autumn, the fluffy white tails turn light brown. Harvest them for dry arrangements. The seed heads, which are compact and dense, last for months. Or, leave the heads intact to add interest to your winter garden.

You can also grow bunny tails in pots, either alone or as an accent (thriller) plant.

Grass Bunny Tails Seeds
Unless you live in a mild climate, treat bunny tails as an annual, seeding it every year.
Buy Now

Directly sow bunny tails outdoors in full sun 3 weeks before the last frost in sandy or well-drained soil. (It doesn’t do well in soggy soil.)

Because the seeds are small, plant them shallowly, scratching them into the soil about 1/4-inch deep. Keep them well watered. Thin seedlings to 12 inches apart.

Like most ornamental grasses, once Lagurus ovatus is established, it’s drought-tolerant.

You can also start bunny tails indoors from seed 6 to 8 weeks before the last frost in your area. Keep the potting medium warm and moist. Seeds will germinate in 15 to 21 days.

In mild climates, zones 7-10, bunny tails can be cultivated as a perennial. In zones 3-6, treat it as an annual. Although Pennisetum messiacum (red bunny tails fountain grass) shares the name “bunny tails” with Lagurus ovatus, its blooms resemble a rabbit’s foot or fox's tail more than a bunny's tail. In fact, its blooms are of a type commonly referred to as foxtails. 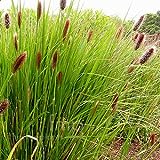 Like bunny tails, Pennisetum messiacumprefers full sun. However, it does well in part shade, too, and it's drought tolerant. In zones 7-10, it grows as a perennial. In any zone where temperatures drop below zero, it's an annual.

Beautiful as a specimen plant, excellent in a large pot, Pennisetum messiacum can grow up to 3 feet tall. Its gorgeous burgundy foxtails eventually fade to white.