Red Valerian has the botanical name of Centranthus ruber, but is also known as known as Jupiter's Beard or Spur Valerian.

This beautiful flowering plant originated in the Mediterranean area, but has now naturalised in many places throughout the world.

Its not really a wildflower, it's more of a garden escapee.

When it finds a place it likes growing, it will self-seed all over the place, even in the cracks of walls.

Should you happen to be considering buying this plant, you would be well-advised to dead-head the flowers to stop them producing seed, unless of course you actually want to see Centranthus ruber coming up everywhere.

Birds and insects love this plant, with its swathes of tiny red, pink or white clusters of flowers, that bring continuous colour and interest into the garden from late spring through to late summer.

It is not a scented plant, but then it doesn't have to be when it brings so much colour and brightens up a dull day. If you put your nose right to the flower, there is a faint aroma that is not particularly pleasant, but not strong enough to be noticeable. 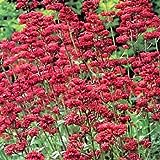 How to grow centranthus ruber

I live in a coastal location with acid soil, and they grow fantastically well here, with salty air and well-drained, sandy soil.

It rains a lot here, but that doesn't seem to put them off at all. As they were originally Mediterranean plants, where droughts are common, we can assume Centranthus ruber is not fussed about climatic conditions.

As you can see in the photographs on this page, Red Valerian seeds readily germinate in limestone walls, where their roots have nothing much to hang on to, and where any growing medium present will be alkaline, and they seem quite happy.

No-one planted them there. We can only assume wind, birds and insects took the seeds there, where they readily germinated, grew and flowered.

Should you obtain any seeds from this plant, you will find them very easy to grow, as they are unfussy about the medium they are grown in, so long as it is free-draining.

How to prune Red Valerian

When flowering is over, cut your Centranthus ruber plant back hard. If there is no frost, there is every chance it will reward you with another flush of blooms.

Jupiter's Beard becomes leggy when they have not been pruned, and their stems turn woody the older the plant is.

Very young plants in their first year are easy to prune as their stems are still soft and green.

As the summer goes on, take the secateurs to them often to cut back leggy stems, or to prune into shape. They are tough plants and can take whatever you do to them.

It is also a good idea to let some seed mature on the plant, if this is the first year you have grown them.

When autumn comes, collect the seed so that you can start again if winter is not so kind to your Red Valerian plant, and it dies.

With any luck, your plant will survive and reproduce, filling your yard with colour every summer, and self-seeding in the most unusual places, in cracks and crevices in walls where they add extra interest.

Red Valerian is a distant cousin to the medicinal plant Valerian, but has no known medicinal qualities.

When to plant red valerian

You can expect perennial Centranthus ruber plants to produce flowers in their first summer, so it is a good idea to start them off early in the year, either indoors or under glass, planting out in April or May when the risk of frost has passed.

There is every possibility that they could be sown under glass in the autumn if you get your seeds by then. Sow them in pots in a cold frame and leave them well alone, and they should come through in the spring as the weather warms up.

If you buy a plant from a garden supplier, soak well and plant out as soon as possible after arrival.

Choose a sunny or part-shaded location, in a spot that is dry like a sloping embankment, a rockery or at the foot of a brick wall. While they tolerate rain extremely well, they do not like having their roots sitting in water, so choose a dry site that other plants would shun.

Once established, they tolerate drought.

Where to buy Centranthus ruber

Amazon sell both the seed and the plants themselves.

As you can see from the photo above, they come in an array of shades from deep red through to white.

They look best when several different shades are planted together, but perhaps from the photos on this page you will see a colour that is perfect for you.

Another big plus for Red Valerian, or perhaps you know the plant better as Jupiter's Beard, is that slugs and snails totally ignore them, while birds are attracted to them.