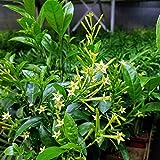 Lady of the Night or Dama de Noche

Cestrum nocturnum, or night blooming jasmine, is a plant from the family solanaceae. It's other names are Lady of the Night, Dama de Noche or Galan de Noche.

I first met this fabulous plant when I moved to Spain. I was walking down the street one evening when I became aware of this most heavenly scent pervading the air around me.

I looked all around to see where it was coming from. There were roses, and jasmine, and lantanas tumbling down a nearby wall and I sniffed each in turn, but no it wasn’t from them, nice though they smelled.

20 metres further on was a large plain looking bush/tree with small elliptic shaped green leaves and tiny little unobtrusive creamy-green tubular flowers wide open. The scent came from them. It was (as I later found out) a cestrum nocturnum plant; the night blooming jasmine.

I took a cutting home and rooted it, and now that little cutting is 8 feet high and a treasure in my garden.

Dama de noche (as it is called in Spain) flowers roughly 4 times per year, but after only a few days to a week the flowers fall off and small green berries grow that later turn white.

The scent is only released at dusk and overnight; the flowers close in daylight.

Cestrum nocturnum is reputed to be the world’s strongest smelling plant, having a range of 50 metres.

Some people are allergic to the smell of dama de noche (cestrum nosturnum), or find it overpowering, but I just love it.

They also reputedly keep mosquitoes away, but I can’t testify to this, as I have to use skin protection almost 24/7 in the summer months here, else I get bitten half to death.

My other way of keeping mosquitoes away is to keep the house windows closed all day and all night to deny them entrance to the house, and then stay indoors, which isn’t all that pleasant when the temperatures are over 100 and I don’t have air-conditioning.

I have a near neighbour who swears the aches and pains he gets in his stomach are entirely due to an allergy to the flowers of the Lady of the Night, or as the Spanish call it, Dama de Noche.

The natives in this village speak Valenciano, and they call it Galan de Noche. Unfortunately for him, quite a few of my neighbours grow this plant.

Sometimes our street smells fantastic and it’s lovely to sit out on the terrace on a warm night and listen to the crickets chirping while the air is heavily-laden with the magic scent of the Lady of the Night.

I believe they are cold-hardy down to -11C and I planted some rooted cuttings in SW Scotland that last time I visited.

I’m told they had quite a severe winter last year so I don’t know if they survived, but they should certainly grow well in a UK conservatory.

Cuttings of cestrum nocturnum can be taken by

Wait until the seed pods turn white, squash the outer coat and remove the seed and plant it to its depth in a compost-filled pot.

Water in well, then place in a sealed plastic bag. Germination can take 4 days to 4 weeks.

If you haven't got a cestrum nocturnum plant in your neighborhood, treat yourself and buy a plant from Amazon.

You won't regret it, and you can always propagate it so that you have loads in your garden.