Septic tank systems become clogged with roots in the leach lines, leach field, drain field or seepage field, causing backup of wastewater into the house. The inexpensive fix is to use copper sulfate through an installed cleanout or septic field pump.

Septic tank systems do not last forever and replacing one is a very expensive proposition. If your house is connected to the city sewer system, then you do not have a septic tank. A septic tank can be described as your very own little sewage treatment plant. There are three basic elements of a septic system:

Eventually leach fields become clogged because the roots from trees and other vegetation are attracted to the nutrient-rich effluent. The roots grow through the pores intended to drain the liquid, seepage gradually slows or stops.

If sufficient pressure cannot be released through the pores of the leach field, the entire septic system cannot accept any more waste water and it backs up in the house, usually at a low point such as a shower or tub drain. If it gets that bad, you may have to replace the entire leach field. In many localities, that will require a building permit and meeting current building codes, which means replacing the entire septic system, which is expensive, etc. 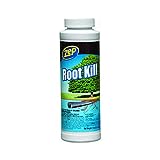 Since this is obviously something to avoid, you can often extend the life of the old system by taking action when sewage flow has slowed, but not completely stopped. Copper sulfate kills roots. If it can be placed into the system so that it will flow through the leach field, the roots will die (but not the plants) and waste water will begin to flow more freely again after a few weeks. In many systems, this isn’t as easy as it sounds, because copper sulfate is so heavy that it will settle to the bottom of the septic tank unless inserted into the leach line leading from the tank. If you have a cleanout or other access there, you’re all set, but many residential systems do not. I prefer the crystal form over the powder because it's easier to handle, cheaper and dissolves more slowly, .

If necessary, it is not very expensive to have a cleanout installed in the leach line expressly for the purpose of adding copper sulfate periodically. If that still doesn’t quite work, or if you want to be sure the stuff is going to flow more quickly, you can pump it through the leach field.

It is possible to install a pump on the leach line cleanout between the septic tank and the leach field. It can be buried below ground level or installed above ground and concealed with landscape bushes. The pump turns on and off automatically to maintain a slight pressure on the waste water, pushing it through the pores of the seepage field. Adding copper sulfate at intervals through a cleanout at this point is effective to drive the chemical towards the offending roots.

Killing the roots may extend the life of the septic system a few years, but it will ultimately need to be replaced with a completely modern one—unless you can successfully lobby for a neighborhood hook-up, of course.