Whatever you call them, these lime green perennials really WOW!

In spring and winter, Heuchera 'Electra' foliage turns pretty shades of yellow. But summer and fall are when it really wows! That's when 'Electra' Coral Bells sport shocking lime-green leaves veined in burgundy.

One of the smaller varieties of Heuchera, 'Electra' Coral Bells grows only 8 inches high. Individual plants will spread to a little over one foot.

Heuchera 'Electra' grows well as a perennial in a variety of Zone 4-9 locations, from full shade to full sun.

Plant it against a shady bank of deep-green ferns or, for phenomenal contrast, juxtapose 'Electra' Coral Bells with deep-purple sun-lovers like Persian shield and Eucomis 'Oakhurst' (Purple Pineapple Lily).

Other Low-maintenance Coral Bells in Lime

'Citronelle' Coral Bells is as hardy as 'Key Lime Pie,' growing as a perennial in Zones 3-9. It does well in a variety of settings, from full sun to partial shade.

This small, compact chartreuse Heuchera grows only 6-11 inches tall. Its leaves have wavy edges, and its flower stalks are short and white.

Buy perennial plants and enjoy them year after year. Unlike annuals, they grow again in spring.

Sedum rupestre 'Angelina' is a fast-growing chartreuse ground cover with golden highlights. In autumn and winter, its foliage may become tinged with amber.

Plant Angelina stonecrop in rock gardens and poor-soil areas. When grown in pots or along walls, it will act as a "spiller" and cascade to the ground. 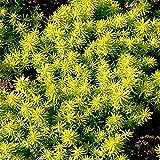 Hosta with a Hint of Lime 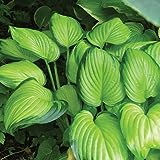 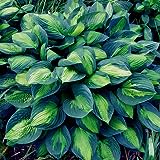 Hybridized from the classic chartreuse-centered Hosta 'Gold Standard,' 'Adrian's Glory' is an incredibly striking plant. A large grower, it can reach up to 36 inches high and 48 inches wide.

Grow 'Adrian's Glory' as a perennial in Zones 3-9. It performs best in shade and prefers moist, rich soil.

Herbaceous perennials like hosta and heuchera have soft stems that die back in winter due to frost. Their crowns, however, remain alive, producing new foliage in spring.

'Sum and Substance' is another large, hardy, chartreuse hosta with textured, waxy leaves that slugs and rabbits find unappealing.

Each clump of 'Sum and Substance' can grow up to six feet wide. In late summer, it produces large stalks of white bell-shaped flowers.

The leaf color of 'Sum and Substance' is at its most chartreuse when grown in the shade. Expose it to more sun, and it becomes more gold than lime green.

Liriope muscari is a clumping type of monkey grass that's often used as a ground cover. Also called turf lily or lilyturf, it's great for erosion control and works well as an edging in flowerbeds and along sidewalks and driveways.

The 'Variegata' cultivar is an eye-popping variation on the usual Liriope muscari. Creamy white edges its arching leaves, which are striped in medium greens and sizzling chartreuse. In the fall, 'Variegata' produces showy shoots of lavender flowers.

A perennial in Zones 5-9, 'Variegata' can grow up to a foot and a half high, and it may spread as much as two feet.

'Peedee Ingot' is a chartreuse liriope that grows in the shade! Its color is at its brightest in spring. By midsummer, it develops stalks of foot-long purple flowers that resemble grape hyacinths.