I didn't even know the plant known as Mother of Thousands had flowers, but this year they were all flowering and they produce the most exotic looking blooms atop of tall flower stems that grow out from the base of the plant.

Mother of Thousands, also known as Bryophyllum daigremontianum or even just as the Good Luck plant, is so-called because it produces thousands of baby plants along the edges of its leaves.

It is a houseplant in temperature and cool climates, but happily grows outdoors in warmer climates.

In some parts of the world it is considered a pest because it reproduces so easily. Knock any of the baby plants off the edges of its leaves, and they will readily root.

It is also highly poisonous.

Fields of mother of thousands plants that have escaped from gardens and naturalized in the wild can easily kill herds of cattle, small dogs or children who put any part of the plant in their mouths.

I must confess that this was news to me, having kept this unusual plant all my life, and having never known it was dangerous. 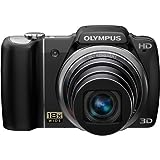 All photos taken with an Olympus SZ-10 point and shoot digital camera.

The close ups are taken using the automatic macro setting which will focus in and give you a really sharp image without having to fiddle about.

If you are in Europe like myself, you may prefer to buy this camera directly from Amazon UK.

They thrive in tropical and subtropical climates where they may be grown outdoors.

Frost will kill them, so if you live in a cooler climate, bring them indoors between early autumn and late spring.

Flowering of Mother of Thousands is sporadic and may not happen at all.

All of my mature plants flowered this winter which brightened up the garden no end with their umbrella-like groups of pink bell shaped flowers.

They normally flower in winter, if they flower at all, and spend the summer produced hosts of baby plants which fall off in the wind and take root nearby.

I used to have just one plant. Now I have hundreds, without actually replanting any of them. I keep my garden plants in pots because the soil is poor and now nearly every pot has a new visitor growing in it.

As you can see from the photograph here, the baby plant-lets throw out roots before they have even fallen or been removed from the mother plant.

They root very easily if simply placed on the surface of some compost in a pot. Give them some water now and then, and it will soon grow up into an adult plant that may or may not produce flowers.